By Susan Ungaro, President of the James Beard Foundation 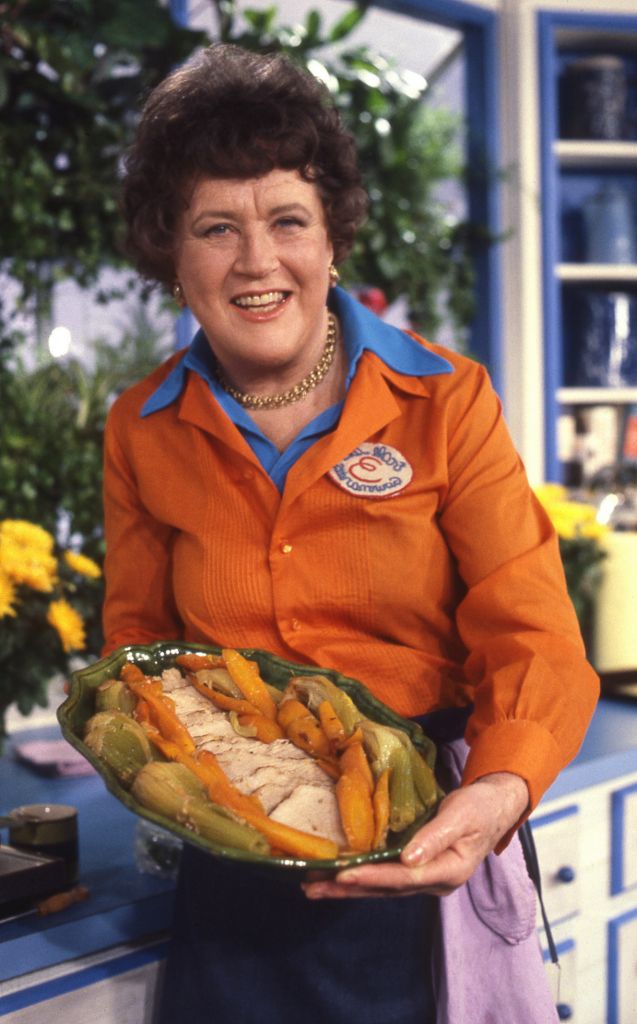 Photo ©James Scherer for WGBH, Boston (circa 1978)
(Photo may be used in publicity materials in conjunction with the broadcast, for as long as this specific episode is in license to air).

For a woman born in 1912, when words like “feminist” and “disruptor” were not a part of the American lexicon, Julia Child was a woman ahead of her time. After all, how many women in the early part of the 20th century volunteered during World War II, wanting to be a spy? Julia was the first woman to have a television show and the first woman to be inducted into the Culinary Institute of America’s Hall of Fame.

Certainly Julie & Julia, the 2009 box-office hit starring Meryl Streep as Julia Child, helped bring attention to America’s first female culinary icon. The film was written and directed by Nora Ephron, whose success ranged across cinema, journalism, theater, and beyond. Nora undoubtedly saw a bit of herself in Julia Child, having succeeded in several fields dominated by men, and she’s not alone. Here are a few areas where Julia has inspired women across America:

Looking Back at the Food Business Prior to Julia

Before Julia Child, there were many cookbooks authored by women – even the very successful Joy of Cooking – but none of those women created a media sensation like Julia. She also pushed women to be more adventurous with her cookbook, Mastering the Art of French Cooking. Remember that in the early 1960’s, women were preparing simple dinners using processed food to make casseroles or even frozen TV dinners. With the publishing of her iconic cookbook and her television show, The French Chef, Julia took the mystery out of French cuisine and gave everyone the confidence to experiment with good food at home.

Disrupting the Status Quo on the Small Screen

Julia was the first woman to have her own cooking show. She thought everyone should be able to cut up their own chicken, getting their fingers “dirty” to really touch and enjoy the ingredients they were using. At the time, female home cooks only worked with meat after it had been cleaned, cut, and packaged for sale in the supermarket, using canned fruits and vegetables as well. She also made cooking fun – a new concept! After all, holding up an entire raw goose by its wings and waving definitely disrupted the usual cooking demonstrations on television.

Julia was a popular and fearless force in the kitchen all her life. She paved the way for other strong female cooks and chefs to create their own culinary and entertainment empires. She attended Le Cordon Bleu, a famous cooking school, and later studied privately with Max Bugnard and other master chefs. Many times she was the only woman in the kitchen. The Julia Child Foundation is a shining example of the impact she’s had on American food.

Julia was a powerful mastermind in launching the James Beard Foundation in 1986. At Julia’s suggestion, Peter Kump, a former student of James Beard and founder of the Peter Kump Cooking School (known today as the Institute of Culinary Education), purchased Beard’s New York brownstone in Greenwich Village and preserved it as a gathering place where the general public and press are able to appreciate the talents of established and emerging chefs throughout the year. From the very beginning, Julia’s admiration for James Beard’s legacy helped launch the James Beard Foundation.

James Beard was a great mentor, promoting other female culinary icons and friends of Julia’s like Marion Cunningham, Barbara Kafka and Alice Waters, to name a few. As a result, the James Beard Foundation has launched programs to empower female chefs. In 2012, we spearheaded a paid mentor program, Women in Culinary Leadership (WCL), which helps aspiring female chefs build in-depth leadership and management skills either in the kitchen or in restaurant management and hospitality. Women with a background in hospitality or the culinary arts and at least two years of relevant work experience are encouraged to apply for a chance to participate in an eight-month mentor program with top industry leaders such as April Bloomfield, Rohini Dey, Richard Melman, Tom Douglas, Mary Sue Milliken, Elizabeth Blau and Gina and Linton Hopkins. We’re proud to report the WCL program has grown consecutively over the last four years, and for the class of 2017 there are 20 positions available offered by 19 mentors.

Our next venture is the launch of the Women’s Entrepreneurial Leadership (WEL) program, which began accepting applications for the inaugural class on February 15, 2017. The WEL program is designed for current female chefs/owners interested in growing and expanding their current culinary business. To learn more about the Women’s Leadership Programs visit our site.

Increasing Inclusion: Where the Culinary Industry Can Go from Here

If Julia were around today, I think she’d say that we need to do more to advance diversity and the careers of women. Julia believed that all you needed to succeed in the kitchen was a sharp knife and courage. One’s gender didn’t enter the equation for her. She encouraged her fans to overcome challenges faced in the kitchen

Fortunately, there are plenty of concrete ways to help advance inclusion in the food business. Start by making a commitment to increasing diversity where you work. If you are a writer, write more stories on women and people of color. If you’re a restaurateur, focus on diversity in hiring. All of us need to become more comfortable with the uncomfortable subject of diversity – it is a cultural imperative.