As part of American Masters’ Inspiring Woman campaign, Dr. Brenda Greene reflects on the trailblazing poet Gwendolyn Brooks. The 2017 National Black Writers Conference will recognize the enduring legacy of Brooks on Saturday, March 25, 2017 at Medgar Evers College in Brooklyn, NY. The public is invited to register here. Tune in to American Masters’ blog and follow us on Facebook, Twitter, Instagram, and Tumblr for updates and interviews from the event. Share your thoughts on Gwendolyn Brooks and other women in literature by using the hashtag #InspiringWomanPBS. 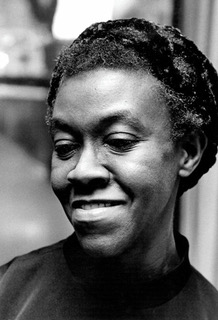 This year marks the centennial of the birth of Gwendolyn Brooks, a literary giant, poet, novelist, advocate, and educator who chronicled Black life with grace and vision for 70 years. In her 1972 autobiography, Report from Part One, Brooks writes of her dedication to bringing the lives of Black people to the page: “If you wanted a poem, you only had to look out of your window.”

Brooks was a Black writer of conscience who focused on the lives of urban Blacks, the migration movement, World War II as well as the social justice movements throughout the last three decades. She was a master of the craft of poetry who believed in studying and adhering to her craft and would not sacrifice her craft for the message.

Brooks’ life spans the Civil Rights Movement, the Black Power Movement, the Black Arts Movement and the Hip Hop Movement. From the 1970s to the 1990s, she published more than a dozen volumes of poetry and nearly a dozen nonfiction titles, which included two autobiographical works — Report From Part One (1972) and Report From Part Two (1995). Before that she published the poetry collections, A Street in Bronzeville, Annie Allen (which won the Pulitzer), The Bean Eaters, and the novel Maud Martha.

A poet Laureate of the State of Illinois, Brooks was the first Black author to win the Pulitzer Prize and was the first Black woman to serve as the poetry consultant to the Library of Congress. Through her powerful, passionate, social and politically conscious poetry and prose, Brooks used a range of modern literary aesthetics to provide a window into the life of Blacks in 20th-century urban America. On Saturday, March 25, 2017, the Center for Black Literature at Medgar Evers College will honor and celebrate the life of this great poet, who has authored more than 20 books but has been too long under-represented in the literary canon.

I had an opportunity to meet Miss Brooks when she attended the National Black Writers Conference at Medgar Evers College in the 1980s. She was a gentle spirit and I am honored to have met such an outstanding, humble and literary legend in my lifetime. As I’ve attended talks and readings in honor of Miss Brooks over the last several months, I’ve also felt privileged to have met her.

“Brooks used a range of modern literary aesthetics to provide a window into the life of Blacks in 20th-century urban America.”

The Center for Black Literature’s honoring of Gwendolyn Brooks is particularly significant as the Gwendolyn Brooks Center for Black Literature and Creative Writing at Chicago State University was the model used to establish the Center for Black Literature at Medgar Evers College, CUNY. Our Center is the only Center for Black Literature nationally that is still committed to the mission of providing emerging and established writers and other members of the literary community, as well as the general public, with a venue for sharing the writing published by Black writers, discussing the trends and themes in black literature, and identifying the major issues and challenges faced by Black writers and those in the business of reading, publishing, and selling black literature. This symposium, held biennially, is a component of the National Black Writers Conference which was initially inspired by the late John Oliver Killens, novelist, activist, screenwriter and writer-in-residence at Medgar Evers College.

We live in a political and social climate where it is extremely important to raise critical questions and to understand the past so that we may critique the present and chart the future. The arts provide a means to understand the human experience as well as social and political movements in multiple ways. Our celebration of Gwendolyn Brooks is designed to both celebrate this writer of conscience and to understand the impact that writers, artists and scholars have on our society. Our writers are our leaders in social movements. They are our storytellers, our modern day griots, our witnesses to life.  The writers, scholars and artists who are part of the Gwendolyn Brooks Tribute are carrying forth an important legacy.

We have to continue to tell the story of Gwendolyn Brooks in our homes, our schools, our libraries and our communities and we have to share her story with the larger society. We must remember that as long as we tell the stories of our ancestors, they will stay alive.

Please visit the Center for Black Literature at centerforblackliterature.org for more information on this historic program, “Our Miss Brooks: A Centennial Celebration.”