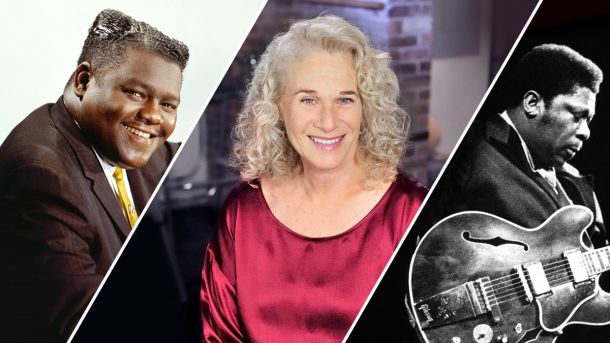 Enjoy these selections, now streaming for a limited time, below and on the PBS Video app.

B.B. King: The Life of Riley

B. B. King: The Life of Riley tells the story of one of the most influential and celebrated blues musicians of all time. From his roots as a sharecropper’s son, he rose to become a living legend — earning the moniker “King of the Blues.” The story of King’s challenging life and career is told through rare archival footage, narration by Academy Award-winner Morgan Freeman, and candid interviews with King himself and contemporaries such as Bono, George Benson, Eric Clapton, Aaron Neville, John Mayer, Bonnie Raitt, Carlos Santana, Ringo Starr, and more.
Streaming until February 11th

Fats Domino and the Birth of Rock ‘n’ Roll

Fats Domino and the Birth of Rock ‘n’ Roll explores the origins of one the most popular early rockers. His boogie-woogie piano playing rooted in blues, New Orleans rhythm, and jazz propelled Domino to the center of a revolutionary genre, with record sales rivaled only by Elvis Presley. Among those interviewed are longtime collaborator Dave Bartholomew, Little Richard, Ray Charles, and Lloyd Price.
Streaming until February 25th

Carole King: Natural Woman explores the unparalleled career of four-time Grammy Award-winner and Rock and Roll Hall of Famer Carole King. The first woman to be awarded The Library of Congress Gershwin Prize for Popular Song, King has 100 hit singles and her compositions have been recorded by over 1000 artists. In Carole King: Natural Woman, she tells her story alongside rare performances and home movies.
Streaming until February 18th