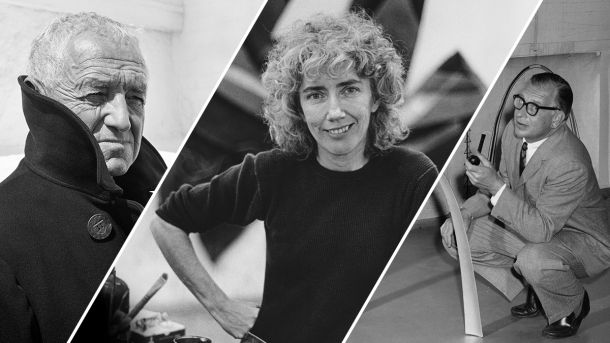 As we prepare for the release of Rothko: Pictures Must Be Miraculous at the end of the month, we’re sharing a selection of our documentaries on visual artists and visionaries. Discover a vault of historical photos in this first film to focus on the larger than life photographer, Garry Winogrand: All Things are Photographable. In Everybody Knows…Elizabeth Murray, Meryl Streep channels the voice of painter Elizabeth Murray whose work rocked the art world. See what the critics of his time missed in Wyeth, who was one of America’s most popular, but least understood, artists. Learn about the man behind some of the most famous buildings in America in Eero Saarinen: The Architect Who aw the Future.

Or if you are looking for the picture-perfect documentary to put you in the Halloween spirit, watch Denis O’Hare’s gripping performance in Edgar Allan Poe: Buried Alive.

Garry Winogrand:  All Things are Photographable

Decades before digital technology transformed how we make and see pictures, Garry Winogrand made over 1 million of them with his 35mm Leica camera, creating an encyclopedic portrait of America from the late 1950s to the early 1980s in the process. When he died suddenly at age 56, Winogrand left behind more than 10,000 rolls of film – more than a quarter of a million pictures. These images capture a bygone era: the New York of Mad Men, the early years of the Women’s Movement, the birth of American suburbs and the glamour and alienation of Hollywood. He produced so many unseen images that it has taken until now for the full measure of his artistic legacy to emerge. American Masters – Garry Winogrand: All Things are Photographable is the first cinematic survey of that legacy. With unprecedented access to Winogrand’s estate and the cooperation of his gallery, the film tells the story of an artist whose rise and fall was – like America’s in the late decades of the 20th century – larger-than-life, full of contradictions and totally unresolved.

This intimate portrait of maverick painter and printmaker Elizabeth Murray explores the relationship between her family life and career, and reconsiders her place in contemporary art history. Excerpts from her journals voiced by Meryl Streep, verité footage and home videos show Murray’s internal struggles and incredible ambition. Exclusive interviews with art world luminaries describe the thriving New York art scene within which Murray challenged and captivated her viewers. In 2005, Murray was the fifth woman to be celebrated with a retrospective at the Museum of Modern Art. Breaking convention, Murray’s paintings still defy efforts at categorization. Through them she made an indelible imprint on the contemporary art world. This film chronicles her remarkable journey from an impoverished childhood in Chicago to the extraordinary art world of lower Manhattan, before she lost her life to cancer in 2007.

After his death, writer Edgar Allan Poe (1809-1849) became a global icon of modern literature and a pop culture brand. Best known for his Gothic horror tales and narrative poem “The Raven,” Poe’s stories are the basis of countless films and TV episodes, and have inspired even more, as has his name and image. At least four American cities claim this literary legend as their own – Baltimore, Richmond, Philadelphia and New York: an NFL football team is named after one of his poems, and his image appears on everything from the Beatles’ Sgt. Pepper’s Lonely Hearts Club Band album cover to lunchboxes, bobbleheads and socks. Creating the detective fiction genre with “The Murders in the Rue Morgue” (1841), Poe wrote over 100 short stories and poems altogether, beginning with Tamerlane and Other Poems (1827), his first published work.