Artist Biography
Bunky Echo-Hawk is a Pawnee artist from Oklahoma who has been painting the reality and resistance of Native American people for almost twenty years. His work initiates discussions about environmentalism, Native rights, and numerous other current topics that find their way into the public’s consciousness through his vibrant and provocative work. His most recent design work involves painting art for the NIKE N7 line of shoes and clothing, which highlight professional Indigenous athletes and raises money that is earmarked for donations to Native athletic programs throughout the country through their N7 FUND. Native athletes like baseball star Jacoby Ellsbury, PGA golfer Notah Begay, and NFL first round draft pick Sam Bradford all wear Bunky’s clothing and shoes. He has created custom shirts, workout gear, and shoes like Air Max, Hyperdunk, KD’s. Follow him on Twitter, Instagram and Facebook. 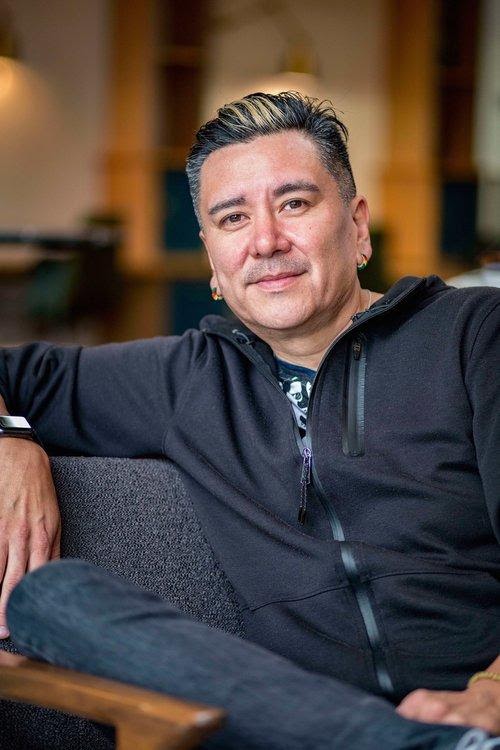 As a filmmaker, Ben-Alex Dupris focuses on tribal language preservation, youth media, and most recently he spent five months documenting the front lines of the Standing Rock occupation. He is an enrolled member of the Colville Confederated Tribes in Washington State, where he grew up. Currently, he is an Artist in Residence at Concordia Studio; he is also a current Impact Producer Fellow for Firelight Media. Dupris is currently producing “Paulette” a film by Heather Rae for The

Guardian, which follows Gubernatorial Idaho candidate Paulette Jordan as the first Native American woman to run for the position. His directorial debut Sweetheart Dancers will premiere at The Big Sky Documentary Festival 2019, as the first film out of Concordia Studio’s residence program. He is also formerly a 2017 Sundance Institute Rauschenburg Producers Fellow. Follow him on Twitter and Instagram.

(soft music) - When we started out as Americans we started with nothing you know.

I've always been compelled to create art that captures our story today.

Our art as indigenous people like the bead work that we had, the quill work all the design elements on our regalia.

(metal beads rattling) (ball thudding) - We need literally for the American people to see us as contemporary human beings.

You really look at the way that this invisibility, these stereotypes and these tropes are very much institutionalized within the culture today to the point that when you Google 95% of the images that come up are pre 1900.

And that's why the art of Bunky is so powerful.

- In a lot of ways I see other artists you know, replicating what was once contemporary art and now it's to me just like when I see it it's beautiful but it's like a beautiful replica.

This image right here is inspired by the fracking operations that we see that are running rampantly through not only through Oklahoma but all the way up through North Dakota you know.

It seems like anywhere there's an Indian lands you know, there's fracking around it.

(sings in foreign language) (car honking) I use our you know foundational colors like from our medicine wheel and so let's start with the red.

So I try to use these colors and the meanings that are associated with each color in my art.

I don't personally follow Christianity but I respect people, spiritual people, their beliefs and their way of praying.

- We have a lot of challenges and aspirations in Indian country that are not covered by the public media and we need spokespersons in all of the mediums you know, to tell our own stories here in native America.

And so I hope he continues on that pathway.

And the reality that we live in today, I mean I don't think you can separate the politics from the beauty of a culture.

He's pretty affirmed in his identity and so that's something that I continuously look up to and see like how it affects our family.

(child mumbles) - That's good he has a dinosaur kind of shape but look he has a ponytail.

I believe that you know, our ancestors, you know, had a way of living that was good enough for them from the beginning of time until a hundred years ago or a couple of generations ago and I think that there's something to that, you know.

(chuckles) - You know Bunky and other artists really began to use things like hip hop and contemporary art and other kinds of ways through culture to really start you know, a very different conversation about who we are as Indian people today.

- I was approached by Nike and seven division, you know that really blew me away you know.

I was a native employee within Nike that you know, started off kind of you know, I think in the warehouses you know had this idea and they they allowed him to to develop it and they supported him and they believed in it.

But then also the sales you know, from those collections go into the end seven fund which is the you know the charitable arm and gets redistributed back into Indian country to fund youth programming.

I've always been drawn to that that feeling of creation and I feel like that ties me back to the very creation of humanity I would hate to drift by my whole life you know creating art that just perpetuated the myth that we are a people of the past.

(soft music) You can take a manufactured non-native cigarette and empty it and it still has the tobacco.

You know traditional tobacco and this is a spiritual currency, you know for a lot of tribes use this kind of as an offering.

I have a lot of love and respect, you know, for our people.

This is where my last name comes from.

It's from this man that's beneath my feet right here.

(speaks in foreign language) This name and the name Echo Hawk was translated from his, one of his names that he had for a good part of his life and it was the Hawk whose deeds are echoed before him.

And so that's my goal.

You know when I'm long gone you know I still want people to sing a song about me to you know and the dancers to dance and to know that this is a song about me and what I did with my life you know, that's how I wanna live forever.