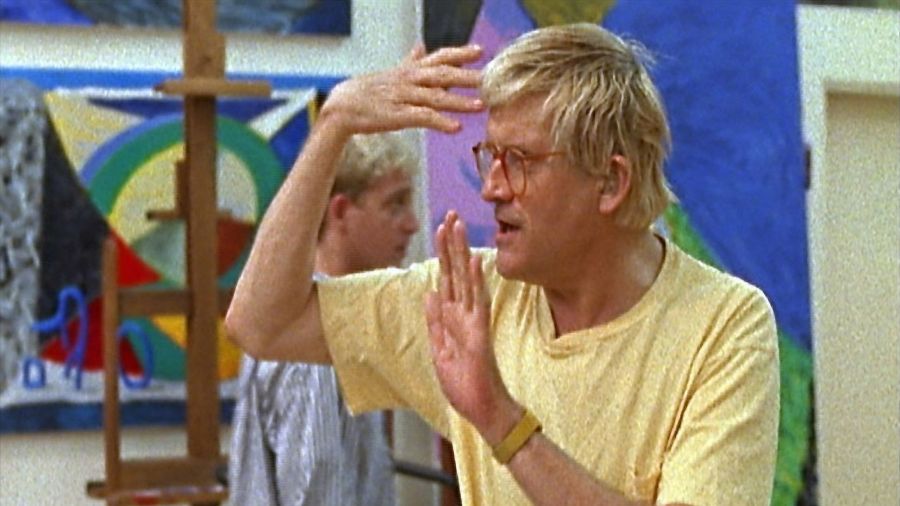 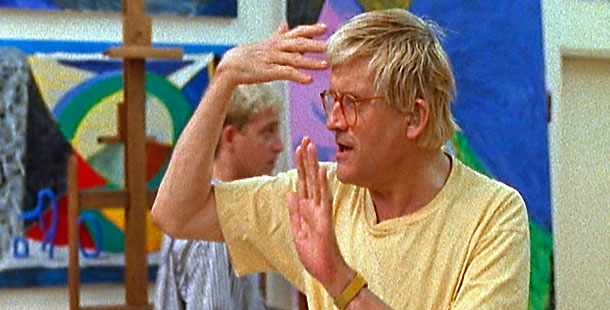 From painting to photos to collage, lithographs and set design, it seems artist David Hockney has done it all. The AMERICAN MASTERS documentary David Hockney: The Colors of Music explores the painter’s set designs while the timeline below provides personal and career highlights.

1961
First visit to the United States.

1965
Teaches at the University of Colorado, Boulder.

1966-67
Teaches at the University of California, Los Angeles.

1967
Teaches at University of California, Berkeley.

1969
Makes series of etchings of six fairy tales from the Brothers Grimm.

1971
Travels to Japan. Film David Hockney’s Diaries made by Michael and Christian Blackwood.

1976-77
Reads The Man with the Blue Guitar, by Wallace Stevens and makes a suite of 20 etchings to illustrate this theme.

1985
Designs cover and 40 pages for the December 1985 issue of French Vogue magazine.

1986
First home-made prints created on photocopiers. Designs and publishes a catalogue of home made prints to accompany his gallery exhibitions. Completes Pearblossom Hwy., 11-14th April 1986 photocollage, which is the culmination of his experiments with photography.

1987-88
Writes, directs and is featured in the film A Day on the Grand Canal with the Emperor of China (or Surface is Illusion But So is Depth), produced by Philip Haas.

1988
Creates 24 original pages for his book, David Hockney: A Retrospective. Creates original prints for local, national, and international publications in connection with his major retrospective.

1988-89
Returns to painting, concentrating on seascapes, potted flowers, and portraits of his family and friends.

1989-90
Makes drawings and transmits them through his laser fax machines. Makes multi-page fax pictures (up to 144 pages) utilizing his black and white laser office copy machine.

1990
Works at Tyler Graphics Ltd. on six new prints. Makes color laser printed photographs from his vacation snaps of Alaska and England. Begins a series of oil paintings of the Santa Monica mountains. Experiments with a still video camera taking full length portrait pictures of friends and family. Designs sets and costumes of Puccini’s Turandot with Ian Falconer, for the Lyric Opera of Chicago and the San Francisco Opera.

1992
In January, opens Turandot and a painting exhibition in Chicago. Finishes designs for Die Rrau Ohne Schatten and travels to London in the spring to supervise construction of the stage sets. Continues with new paintings in his Malibu studio. Opens Die Frau Ohne Schatten in London in November.

1993
Travels to Barcelona for a retrospective of his work at the Palau de la Virreina. Opens a painting exhibition in New York of his “Very New Paintings.” Creates 12 prints with Gemini G.E.L., Los Angeles. Continues research with color laser printed photographs from color slide pictures of travels to Japan, Scotland and England. Stages his two opera productions in fall 1993, for San Francisco and Los Angeles. Begins portrait and dog drawings in December.

1995
Begins portrait paintings of his dogs, Stanley and Boodgie. Paints large abstracts to exhibit in Los Angeles. Paints BMW art car for the BMW art car collection. Exhibits paintings and drawings at the 1995 Venice Biennale, Italy. Opens his traveling Drawing Retrospective in Hamburg, Germany. Paints still lifes and makes digital inkjet prints from photographs of paintings. Paints museum walls in Munich for a group exhibition on the subject of the “Pierrot” figure. Opens painting exhibition of still lifes and dog paintings at Rotterdam Museum and attends his Drawing Retrospective opening at the Royal Academy of Arts, London. Makes five etchings with aquatint with printer, Maurice Payne.

1996
Paints portraits of family and friends in January. Opens his Drawing Retrospective at the L.A. County Museum of Art. Creates Snails Space with Vari-lites, “Painting as Performance,” at his Santa Monica Boulevard studio and exhibits this with other paintings in two New York galleries in May. Begins flower paintings. Travels to Melbourne to stage his opera production of Die Frau Ohne Schatten. Begins portraits in L.A. and continues painting portraits in England.

1997
Restages his opera production of Tristan und Isolde at the Los Angeles Music Center Opera. Continues new portrait paintings, and opens exhibition of flower paintings and portrait paintings in London in the spring. Visits the southwest on two separate occasions during the summer. Celebrates his 60th birthday in Los Angeles. Travels to London at the end of July to receive Order of the Companion of Honour award from Her Majesty, the Queen of England. Makes new oil paintings of the Yorkshire landscape. Opens his photography exhibition at the Museum Ludwig in Cologne in December.

1998
Paintings and drawings of Stanley and Boodgie are published in a new book called David Hockney’s Dog Days, in Europe and the USA. Begins new suite of etchings with Maurice Payne in Los Angeles. Continues large landscape paintings. Exhibits some of them at the Museum of Fine Arts, Boston in April. Paints A Bigger Grand Canyon, oil on 60 canvases, with an overall size of 81.5 x 293 in. and exhibits it at the National Museum of American Art, in Washington D.C. in June. Exhibits landscape paintings, drawings and photocollages at L.A. Louver in Venice, California. Paints A Closer Grand Canyon and makes other detail studies of the Grand Canyon in oil and in crayon.

1999
Opens three exhibitions in Paris. Exhibits 1998 etchings at Pace Prints in New York. Installs nine Grand Canyon paintings at the Royal Academy of Arts, London for the Summer Exhibition. Travels to London and begins portrait drawings using a camera lucida. Exhibits some of the drawings in London, in June. Begins research and correspondence with art historians and friends concerning the use of mechanical devices by Ingres and other artists. Publishes an article in the RA magazine concerning his findings. Returns to Los Angeles and continues his drawings with the camera lucida, and his research. Participates in the Ingres and Portraiture International symposium at the Metropolitan Museum of Art in New York. Gives a talk about his research to the art history department at Columbia University, New York.

2000
Begins writing a book about his research and theories on old masters use of mechanical devices. In London, begins paintings of his garden and continues work on his book.

2001
Completes his book, Secret Knowledge: Rediscovering the Lost Techniques of the Old Masters. Gives lectures about his discoveries at the Van Gogh Museum, Amsterdam, and the L.A. County Museum of Art. In the summer, travels to England, Germany, Italy and Belgium. Works on a documentary with the BBC about his research and theories. Opens his traveling photography retrospective at the Museum of Contemporary Art, Los Angeles. Gives lecture for MOCA. Attends Die Frau Ohne Schatten rehearsals at the Royal Opera House, Covent Garden. His film, Secret Knowledge, is broadcast in England. Exhibits paintings and drawings of his garden in Paris. Participates in symposium at NYU Law School concerning his book and film theories.

2002
Has conversation with Lawrence Weschler about his book and film theories at the J. Paul Getty Museum auditorium in Los Angeles. Travels to New York to work on his opera production revival of Parade: A Triple Bill for the Metropolitan Opera. Begins working in watercolor. Travels to London and continues his watercolors. Sits for the painter, Lucian Freud, while in London. Assists Her Majesty the Queen of England in presenting the 2002 Visual Arts Award to a student at the Royal Academy of Arts, London, in celebration of the Queen’s 50th Anniversary Golden Jubilee. Travels from London to the Norwegian fjords and to Iceland and creates watercolors and sketchbooks of his travels.

2003
Begins watercolors in Los Angeles. Visits Norway. Continues work in watercolor, in London and in L.A. Attends the Optics, Optical Instruments and Painting: the Hockney-Falco Thesis Revisited conference in Ghent, Belgium. Travels to Florence, Italy to receive an honorary degree at the Academy of Fine Arts and to receive the Lorenzo de Medici Lifetime Career Award at the Florence Biennale. 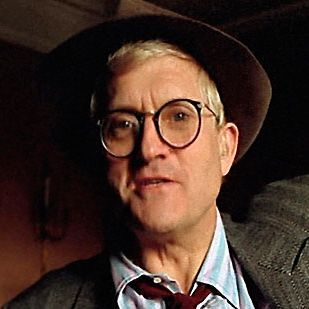