Best known for her iconic photograph Migrant Mother, photographer Dorothea Lange (1895-1965) had a career that spanned more than four decades. In 1919 at the age of 23 she daringly opened a portrait studio in San Francisco. Meeting her husband, the painter Maynard Dixon, who was 20 years her senior, exposed her to the bohemian art world and the wild southwest, where she photographed Hopi country.

After living in Taos with Maynard, their two sons and a step-daughter Constance, they returned to San Francisco at the height of the Depression. Stresses on their marriage and livelihood led to their divorce. With the advent of the Great Depression, Lange felt compelled to take her camera out on the streets of San Francisco. The resulting photographs led to work with the Farm Security Administration as a documentary photographer.

In 1935, Lange married Paul S. Taylor, an economics professor at the University of California with whom she worked with in the field. Taylor and Lange lived, loved and worked together in intense collaboration until her death in 1965.

During World War II, Lange photographed the horrible dislocation and internment of the Japanese Americans. An early environmentalist, she photographed in the ’50’s what she called “The New California” – the massive changes and pressures on the golden state.

Her increasingly poor health led to short bursts of work doing photo-essays for Life and Aperture magazines. On world trips to Asia, South America and Egypt in the late 1950s and early 1960s, she created an extensive, lyrical body of work.

Lange’s final years were astonishingly productive. She continued her photography on American women and on her theme “Home is Where.” Her journal reflected her personal debate over whether she was a craftsman or an artist and whether her efforts to document the human condition should be considered “art.”

Her ultimate effort came when she was dying of an inoperable cancer of the esophagus, in reviewing her life’s work, preparing a retrospective exhibit for the Museum of Modern Art (MoMA). Her one-person show would be only the sixth dedicated to a photographer and the first ever for a woman photographer.

Despite her painstaking work in selecting images for the exhibit, Lange would not live to see the finished result. She died on October 11, 1965, at age 70, shortly before the MoMA retrospective opened to widespread acclaim.

May 25, 1895 Dorothea is born in Hoboken, N.J., to Henry Martin Nutzhorn and Joan Lange Nutzhorn.

1902 Dorothea is disabled by polio. She walks with a limp the rest of her life

1907 Dorothea’s father abandons their family. She never sees him again. Dorothea’s mother finds a job in New York. Dorothea, her brother and mom go to live with Joan’s mother Sophie.

1912-1913 Lands her first job as office assistant with the famous photographer Arnold Genthe.

1916 Hired as a printer, photo retoucher and staff photographer by a photo studio at 461 Fifth Ave., New York, N.Y., owned by Mrs. Spencer-Beatty. Her first portrait assignment is the Irving Brokaw family and it launches her career as a portrait photographer.

1917 Takes Clarence White’s photography course at Columbia University. Meets an itinerant (still no name) photographer and with him builds a darkroom out of a chicken coop behind her home, which teaches her how to create a darkroom. 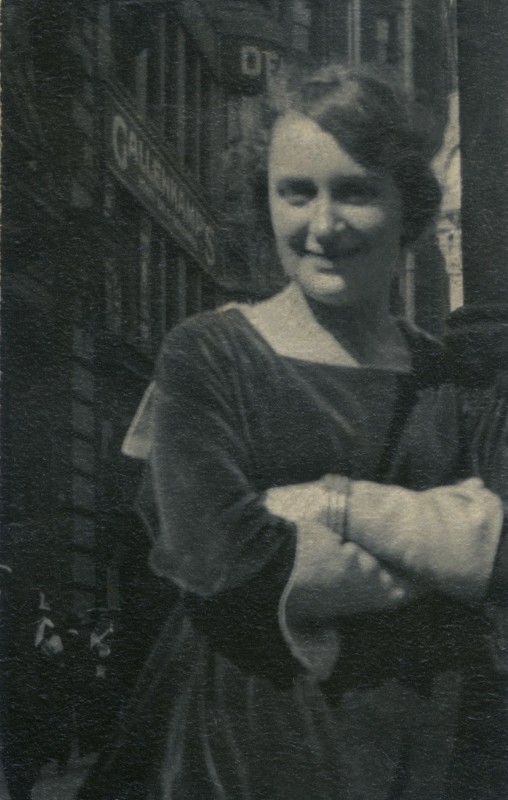 Dorothea Lange in San Francisco, circa 1920

January 1918 Dorothea and her friend, Fronsie Ahlstrom, embark on voyage around the world. Lands in San Francisco. Meets Imogen Cunningham and Roi Partridge.

1919 Opens her own portrait studio. Photographs the Christina Clausen Gardner family for the first time.

Summer 1923 Dorothea and Maynard take a trip to the Navajo and Hopi lands. She takes the famous picture Hopi Indian.

1928 Her son John Eaglefeather is born.

Summer 1929 With family, she vacations in Lone Pine, Calif. In the middle of a thunderstorm in the mountains, she has a spiritual awakening that she is supposed to take photographs which concentrate on all kinds of people, not just paying work.

1932 Hard times: Maynard and Dorothea give up their mutual home and move in to their individual studios. Dorothea and Maynard begin periods of boarding their children out. 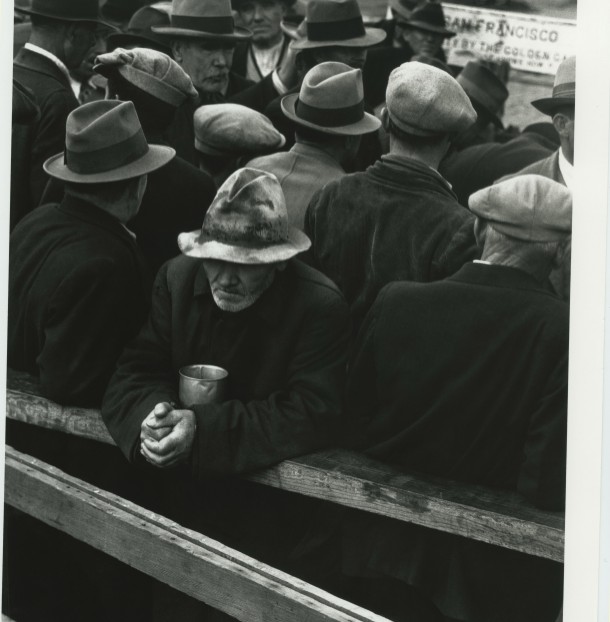 1934 Hoover/Boulder Dam being built. Dorothea’s brother Martin is a laborer at the dam. Maynard goes there to paint.

Summer 1934 Willard Van Dyke exhibits Dorothea’s photographs in his studio in Oakland, Calif. Dorothea meets Paul Schuster Taylor, an economics professor. He asks her to illustrate his article in Survey Graphic. They begin to collaborate (UXA collaborative in Oroville), combining his writing and her photographs.

December 1935 Dorothea marries Paul Schuster Taylor. Both move to 2706 Virginia St. in Berkeley, Calif. Children of both families combine and are boarded out periodically for the next few years. 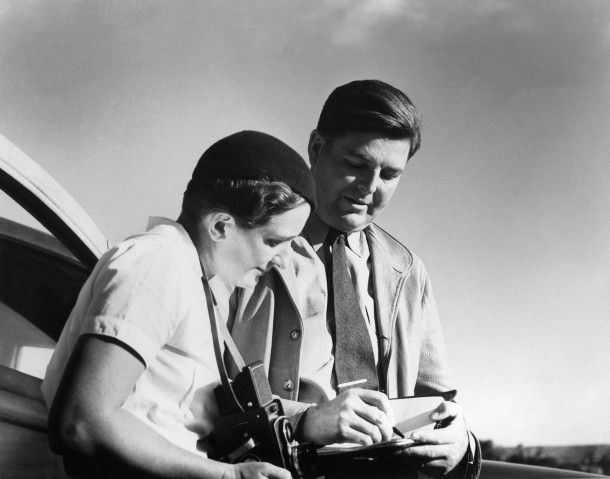 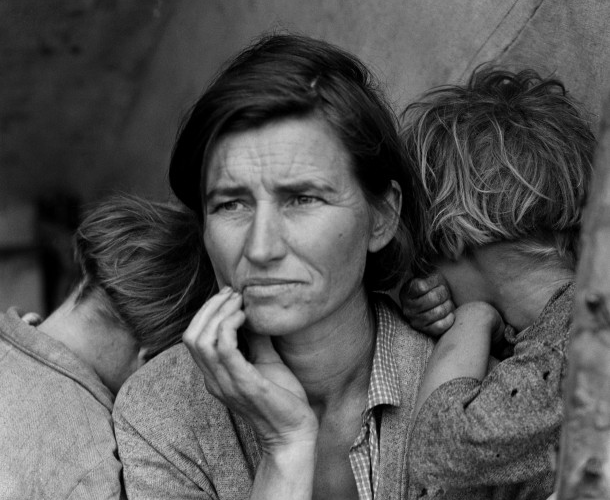 May 1936 Dorothea and Paul’s supervisor Roy Stryker asks them to do a government project to find jobs for those who had become unemployed in New York City.

Summer 1936 Travels through the South and photographs tenant farms/sharecroppers

1936 Dorothea takes the photo “Hoe Culture” near Anniston, Ala. Paul Taylor transferred to research division of Social Security Board. He and Lange continue to work in the field. 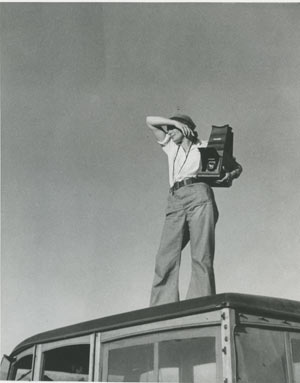 September 1936 Survey Graphic article by Taylor with photos by Lange

1937 Dorothea takes the photo “Ex-Slave with Long Memory” in Alabama.

1938 Dorothea takes the photos “Six Tenant Farmers Without Farms” in Hardeman County, Texas, “Family on the Road” in Oklahoma and “Woman of the High Plains” in the Texas Panhandle.

1939 Dorothea travels through California to record the expansion of mechanized agriculture. 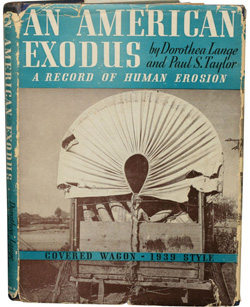 An American Exodus, by Dorothea Lange and Paul S. Taylor

October 1939 Dorothea is let go from the FSA payroll.

early 1940s Lange is hired by the War Relocation Authority (WRA) to photograph the roundups of Japanese Americans from their homes to temporary “assembly centers” in horrible conditions. 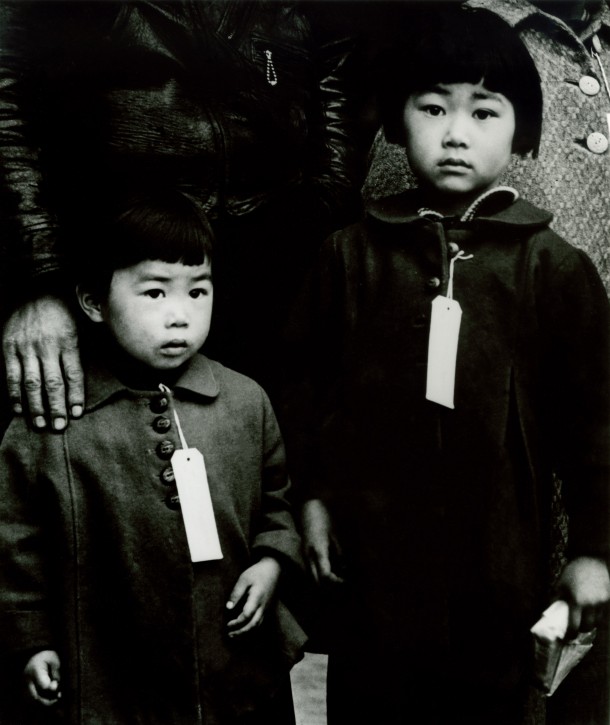 1942 Dorothea takes the photo “One Nation Indivisible” in San Francisco.

1942-1957 Dorothea takes assignments, some with her son Daniel, who has become a writer.

1943-1944 In collaboration with Ansel Adams, Dorothea creates a photo essay for Fortune magazine on war shipyards in Richmond, Calif.

1945 Dorothea has an assignment to photograph the United Nations Conference in San Francisco.

1945-48 Illness sets in. She is plagued for the rest of her days by pain and discomfort. Stays close to home and begins to photograph around home.

1949 Featured in “Sixty Photographs by Six Women,” an exhibit curated by Edward Steichen for NY MoMA

1951 Participates in Aspen Conference on Photography, becomes a founding member of Aperture.

1952 Writes “Photographing the Familiar: A Statement of Position” with son Daniel Dixon. MoMA exhibit “Diogenes with a Camera” includes 36 of Lange’s prints.

1954 Completes story for Life magazine on Ireland and Irish people with son Daniel Dixon. Dorothea assists Edward Steichen in reviewing West Coast photographic work for Steichen’s “The Family of Man” exhibition at MoMA. Nine of Dorothea’s photographs, the most of any photographer, are published in the book “The Family of Man.”

1955 Works on story in Bay Area about “Public Defender.” The Dixon/Lange/Taylor family begin a long-term lease on the family cabin at Steep Ravine, Calif.

1955-1957 Works on “Death of a Valley” story and Monticello/Berryessa with Pirkle Jones. Idea around “New California” begins.

1958 Dorothea is one of 19 photographers featured by Beaumont and Nancy Newhall in their book Masters of Photography. Teaches a photography class titled “The Camera, an Instrument of Inward Vision: Where Do I Live?” at California School of Fine Arts. Meets the young filmmaker Phil Greene. Accompanies Taylor, now a consultant to the United Nations and A.I.D., to Japan, Korea, Hong Kong, the Philippines, Thailand, Indonesia, Burma, India, Nepal Pakistan and Afghanistan.

1959 Publishes “Death of a Valley” in Aperture.

1961 Has one-person exhibition of her images of rural American women at the Carl Siembab Gallery in Boston.

late 1962 Dorothea’s teaching assistant and friend Phil Greene begins filming Dorothea for a film he intends to make about her.

1962-early 1963 Travels with Taylor, consulting at the University of Alexandria, in Egypt. 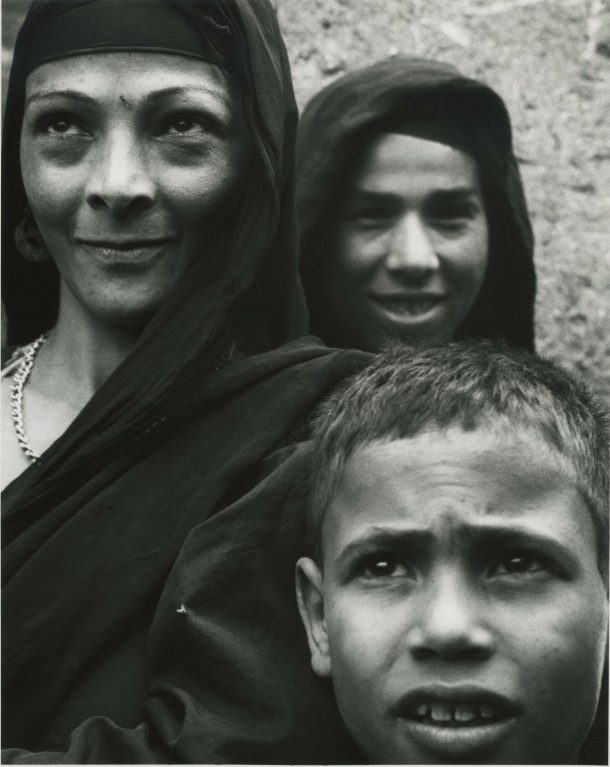 1963 Writes proposal for Guggenheim fellowship to produce a “photographic and text record of the California Central Valley, what the valley is and what it is becoming” and “Project One,” a new FSA type of photo unit/documentation

July-August 1964 Diagnosed with cancer of the esophagus.

1964-1965 KQED begins production on two, half-hour films about Dorothea for National Educational Television (NET), a precursor to WNET. Phil Greene and his colleagues at KQED, Richard Moore and Robert Katz, work together on the films. Phil continues filming Dorothea’s life at her home and as she prepares her MoMA exhibition until a month before her death.

1965 Works with Szarkowski on MoMA exhibition. Pirkle Jones creates photograph of entire Lange/Dixon/Taylor family. KQED produces the two Lange documentaries for NET: USA: Photography: Dorothea Lange: Closer for Me and Under the Trees (both are broadcast on public television in 1966).

1967 Publication of Dorothea’s photographs for her book Dorothea Lange Looks at the American Country Woman.

1972 Publication of Executive Order 9066: The internment of 110,000 Japanese Americans by Richard and Maisie Conrat (California Historical Society) with principal photography by Dorothea Lange.

1973 Publication of To a Cabin, Lange’s photographs of life at Steep Ravine, Calif., with co-photographer Margaretta Mitchell.