When I met Elizabeth Murray in the late 80s, we were part of a small group of women who went out into the wilds of Utah for a week or so once a year to ‘dish and download.’ We all had blossoming careers, and needed to express our needs and frustrations in a neutral and nurturing environment. We would hike during the day and talk about our lives, sharing our secrets, our fears and our joys. Most of us were artist-moms and we wrestled with similar conflicts of career and family.

Inspired by the documentaries of my colleagues Martin Scorsese and Jonathan Demme, it became increasingly clear to me that a film about the life and work of Elizabeth Murray was essential. Her untimely death in 2007 due to cancer underscored my desire to share the precious moments I have spent with Elizabeth. This documentary will also be an effort to raise awareness about the “basic sexism” of the art world. Through Elizabeth’s story we hope to shine a light on all female contemporary artists who have not received as much attention as their male counterparts. In addition, we will explore what it means to be a “successful artist.” In what terms do we determine the value of an artist’s work?
​
This hour-long documentary celebrates the life and work of American painter Elizabeth Murray and assimilates her into our cultural literacy. I am thrilled that the film premiered at the Whitney Museum as part of the 2016 Tribeca Film Festival and will be seen around the world! My only sadness is that Elizabeth isn’t here to enjoy it.
About the Master 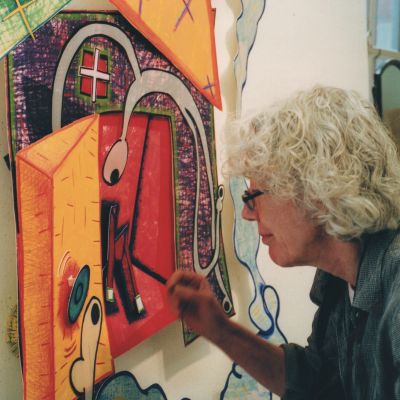