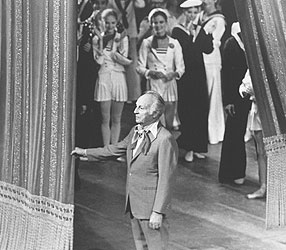 AMERICAN MASTERS: You directed many of the early “Dance in America” films for PBS, including several works by Balanchine.

MERRILL BROCKWAY: The difference with “Dance in America” was that we wanted the participation of the choreographers. Balanchine had been used to people just taking his pieces and doing what they want to do. Emile Ardolino, who was my colleague in this, had been trained as a dancer, and we were very firm that we wanted the participation of the choreographer. If we didn’t care about the choreography we didn’t do the piece. Because we had that kind of leeway. So Balanchine was very much a part of our team, and he liked that, and he liked making television, and he liked that his vision was coming through, the way he wanted his pieces to be seen.

When I met Balanchine he said, “How much do you know about ballet?” And I said, “Nothing.” And he said “Good. I’ll teach you.” And that’s what he did. We would be sitting on a set waiting for changes and he would start talking, he would give me little essays– notes and steps and things like that, and about what dancer succeeds more than others and so forth.

AM: It sounds like he had a real love for teaching.

MB: Oh, he was the best teacher anybody has ever seen. Just ask any of the dancers, they would fall over backwards for him. He had such an influence. You know, he would stand on stage right in the wings for all the performances that he would see and his dancers would be so aware that he was there, and they would dance better.

AM: Balanchine created over 400 works in his lifetime. How do you think he was able to be so prolific?

MB: That’s the mystery. That seems to be the question that nobody’s been able to answer. How did he do it? And where did he get the inspiration, the pulse, to go towards certain subjects? I think one of the secrets is he made pieces for individuals. He didn’t make pieces in general. They were all pieces based upon character and dancer qualities of his company.

AM: So he was always able to be inspired by the people around him?

MB: Yes. He had people around him who grew and changed and they were wonderful, they became better artists around him. So I think that’s part of it.

He gave his dancers such license. He would teach his dancers the steps and then just watch them as they developed into the role. It’s a totally singular way of teaching. If a dancer was replaced in a role, he would come in with the replacement and redo the piece for that dancer so that they didn’t just step in to somebody else’s piece. What he did was make you better than you could be by yourself. And that I think would be my catch phrase for Balanchine: he made me better than I could be by myself.

AM: Tell us more about recording dance and the process of working with Balanchine.

MB: Some people and a lot of directors, they work the dancers too hard, and finally when you get to the performance, they’ve already given it. The dancers are wonderful, because I always maintained that they are the best trained and disciplined of any of the artists. You see, they’re used to performing, building up and performing at eight o’clock at night, while we start [television production] at nine o’clock in the morning. And they have class, so that’s 10:30, and then they have to rest a bit, so we can’t get started before 11. But then it’s 11 through seven, constantly rehearsing, taping, rehearsing, taping. And we never did anything over five minutes in length, and would edit the pieces together later. Because that’s the way you can get your [complete] performance. Jerome Robbins hated the idea, because he wanted to see the spontaneity that comes from [a complete] performance. Well, it was just not possible [to film that way], but Balanchine was delighted with it, because he got the perfection he was looking for.

A lot of people have commented that the shooting, our shooting was just boring, it was too bland, but Balanchine wanted you to see the dance. We didn’t want the camera to distract you. A lot of television today [consists of] fast cuts but dancing doesn’t take to that– particularly ballet dancing. You have to trust the dancing. That was Balanchine’s phrase. When we talked at first, he said, “Would you trust the dancing?” And I said, “Yes.” It took me years to figure out what he meant, but I think I found out. 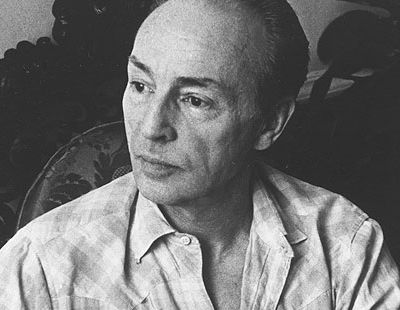