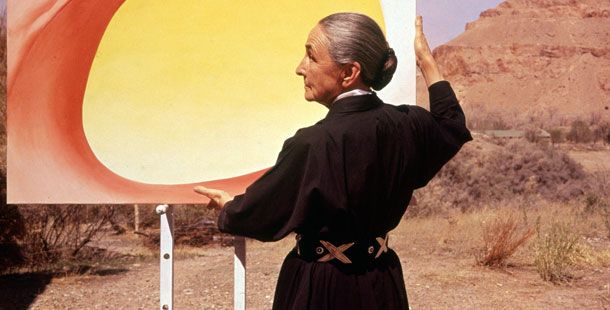 Among the great American artists of the 20th-century, Georgia O’Keeffe stands as one of the most compelling. For nearly a century, O’Keeffe’s representations of the beauty of the American landscape were a brave counterpoint to the chaotic images embraced by the art world. Her cityscapes and still lifes filled the canvas with wild energy that gained her a following among the critics as well as the public. Though she has had many imitators, no one since has been able to paint with such intimacy and stark precision.

Georgia O’Keeffe was born in Sun Prairie, Wisconsin in 1887. The second of seven children, O’Keeffe longed to be an artist from an early age. In 1905 she attended the Art Institute of Chicago and a year later went to study at the Art Students League of New York. Though her student work was well received she found it unfulfilling, and for a short time abandoned the fine arts. She worked briefly as a commercial artist in Chicago before moving to Texas to teach. During the summer of 1915, O’Keeffe took classes at the Teachers College of Columbia University in South Carolina, and there began her re-entry into the world of painting.

Teaching in South Carolina was Arthur Dow, a specialist in Oriental Art. Dow’s interest in non-European art helped O’Keeffe move away from the forms she had found so stifling in her previous studies. She said of him, “It was Arthur Dow who affected my start, who helped me to find something of my own.” Soon after O’Keeffe’s return to Texas, she made a handful of charcoal drawings, which she sent to a friend in New York. The friend, Anna Pollitzer, showed them to Alfred Stieglitz, a photographer and gallery owner. He was enthused with the vibrant energy of the work, and asked to show them. So, without her knowledge, Georgia O’Keeffe had her first exhibition in 1916 at Steiglitz’s “291 Gallery.”

Within two years, Steiglitz had convinced O’Keeffe to move to New York and devote all of her time to painting. His regular presentations of her work had begun to cause a buzz, and create for a her a small following. Six years later the two were married, beginning one of the most fruitful and well-known collaborations of the modernist era. For the next twenty years the two would live and work together, Steiglitz creating an incredible body of portraits of O’Keeffe, while O’Keeffe showed new drawings and paintings nearly every year at the gallery. Living in Lake George, New York, and in New York City, O’Keeffe painted some of her most famous work. During the 1920s, her large canvasses of lush overpowering flowers filled the still lifes with dynamic energy and erotic tension, while her cityscapes were testaments to subtle beauty within the most industrial circumstances.

In 1929 O’Keeffe took a vacation with her friend Beck Strand to Taos, New Mexico. The trip would forever alter the course of her life. In love with the open skies and sun-drenched landscape, O’Keeffe returned every summer to travel and to paint. When Steiglitz in 1946 died, O’Keeffe took up permanent residence there. More than almost any of her other works, these early New Mexico landscapes and still lifes have come to represent her unique gifts. The rich texture of the clouds and sky were similar to her earlier, more sensuous representations of flowers. But beneath these clouds one found the bleached bones of animals long gone.

Throughout the 1950s and 1960s, O’Keeffe’s fame continued to grow. She traveled around the world and had a number of major retrospectives in the U.S. The most important came in 1970 at the Whitney Museum of American Art, placing her categorically as one of the most important and influencial American painters. The next year O’Keeffe’s vision deteriorated dramatically, and she withdrew from artistic life. It was not until 1973, after meeting Juan Hamilton, a young ceramic artist, which she returned to working. With his encouragement and assistance, she resumed painting and sculpting. In 1976 her illustrated autobiography, GEORGIA O’KEEFFE was a best seller, and the next year she received the Medal of Freedom from President Gerald Ford.

In 1985 she received the Medal of the Arts from President Ronald Reagan. In March of the next year, at the age of 98, O’Keeffe passed away at St. Vincent’s Hospital in Santa Fe, New Mexico. Georgia O’Keeffe’s work remains a prominent part of major national and international museums. For many, her paintings represent the beginnings of a new American art free from the irony and cynicism of the late 20th century. 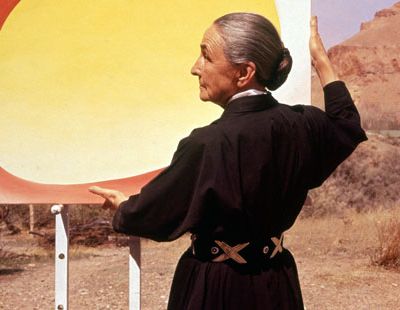