A notorious fussbudget about sound, Paul arrives at the Iridium from his home in Mahwah, N.J., at 4:15 p.m., nearly four hours before his first show, so he has time to fine-tune the sound system. He is joined by his son and sound man Rusty, who lives with him, and another sound man. Since moving to its new locale at 1650 Broadway, the club has gone to great lengths to meet Paul’s demands. 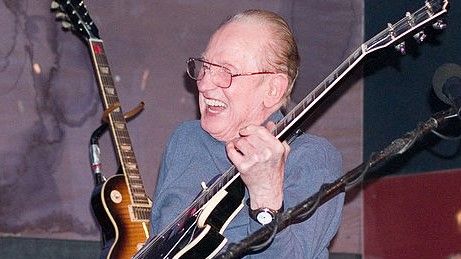 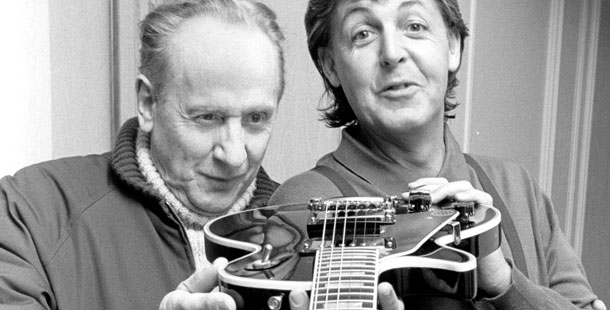 “The Wizard of Waukesha” took up his first instrument, a harmonica, at age eight. By 13, he was performing. His incredible trajectory is thoroughly explored in AMERICAN MASTERS Les Paul: Chasing Sound. Here are some highlights from his life and career.

1929
Joins Rube Tronson and his Texas Cowboys for a summer gig in Escanaba, Michigan, and befriends his mentor and guitar tutor, “Sunny Joe” Wolverton.

1932
Drops out of high school and teams up with Wolverton as “Sunny Joe” and “Rhubarb Red,” performing for “hillbilly” radio stations in Springfield and St. Louis, Missouri.

1933
Rhubarb Red and Sunny Joe move on to Chicago to perform at the World’s Fair and then with WBBM, until Paul decides to pursue jazz – living a dual identity as Rhubarb Red on daytime radio and as Les Paul at night, jamming with the jazz greats.

1934-6
Forms the Les Paul Trio with Ernie Newton and Jimmie Atkins; makes Decca blues recordings with Georgia White; and begins the first of many solid-body guitar experiments, paying the Larson Brothers $15 to build a single cutaway half-inch maple top, with no f-holes and two pickups.

1937
Joins Fred Waring and the Pennsylvanians on NBC radio, bringing the sound of the electric guitar to millions of listeners coast to coast.

1941
Working weekends at the Epiphone factory in New York City, builds “The Log” by attaching a standard Epiphone neck, strings and wings to a 4×4 board with a pickup. When M. H. Berlin, president of Gibson Guitar’s parent company, takes little interest in this “solid-body,” Paul braces an Epiphone hollow body with a 3/8-inch steel bar, winds his own super-hot pickups and, for a decade or more, uses “The Klunker” as his primary electrified guitar for performing and recording.

1942
Moves to Los Angeles with the dream of teaming up with Bing Crosby and replacing the late Eddie Lang, Paul’s guitar idol.

1944
Drafted into Armed Forces Radio Service, where he creates V-Disc recordings and AFRS radio shows. Tangles with Nat Cole during the first “Jazz at the Philharmonic” concert in Los Angeles, one of history’s most famous jams.

1946
Paul’s mother complains that every guitar player on the radio sounds just like him. Paul leaves tour with the Andrews Sisters and returns to his garage studio in Hollywood for two years of research into echo, overdubbing, phasing, and other recording effects.

1948
Emerges from studio with 22 “New Sound” recordings of multiple overdubbed guitars; Capitol Records releases Paul’s first solo hit single – “Lover” backed by “Brazil.” Paul and Ford inaugurate their musical act in Waukesha; en route back to California, their convertible careens off Route 66 during a winter storm. Paul’s right arm is badly damaged and doctors recommend amputation, but Paul persuades them to re-set arm in a crook so that he can continue to play.

1950
Gibson Guitar Corp. begins work on a solid-body electric guitar and seeks endorsement of the most prominent guitarist of the day.

1951
“How High the Moon” and “Walkin’ & Whistlin’ Blues” are chart-busters; Paul and Ford play the London Palladium.

1953
Conceives of 8-track tape recorder and works with Ampex to refine and manufacture the equipment. Release of Paul and Ford’s biggest hit, “Vaya Con Dios.”

1955
As guest speaker at Audio Engineers Society convention, Paul proposes the “use of light for recording sound.”

1956
Invents the “Les Paulverizer,” a remote-control device he attaches below the tailpiece of his guitar to manipulate the taped accompaniment he and Ford used during their White House concert for President Dwight D. Eisenhower.

1964
Retires from performing, but not from tinkering with pickup designs and other electronics.

1976
Emerges from retirement to record “Chester & Lester” with Chet Atkins, and a 1978 follow-up, “Guitar Monsters.” The former receives a 1977 Grammy for “Best Country Instrumental Performance.”

1979
Receives Recording Academy’s Grammy Hall of Fame Award for “How High the Moon.”

1984
Launches a regular Monday night gig with his trio in New York City, first at Fat Tuesdays and then at the Iridium Jazz Club.

1988
Lauded in a Cinemax tribute, Les Paul: He Changed the Music, with B.B. King, Eddie Van Halen and others.

1988
Induction into the Rock and Roll Hall of Fame as “Architect of Rock ‘n’ Roll.”

2001
Awarded a Technical Grammy by the Recording Academy.

2005
Celebrates his 90th birthday with a tribute concert at Carnegie Hall; inducted into National Inventors Hall of Fame; receives Sammy Cahn Lifetime Achievement Award from the Songwriters Hall of Fame. 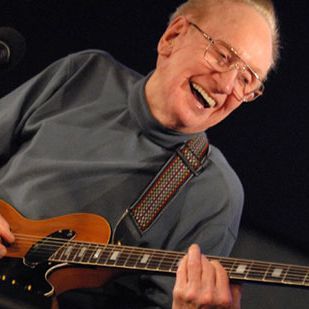