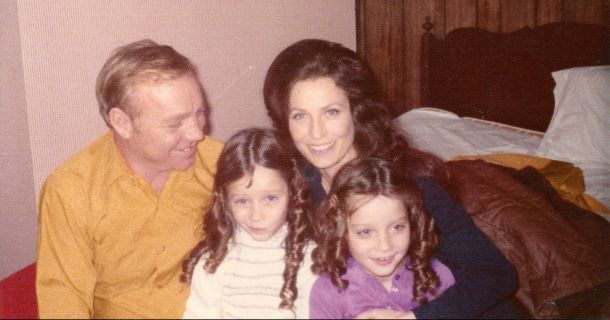 Doo and Loretta Lynn with twins Patsy and Peggy.

Country music icon Loretta Lynn was married at the age of fifteen. By the time she was twenty-two, she had given birth to four children. Several years later, in her early thirties, Loretta gave birth to twin girls.

She had a total of six children.

The eldest child of Loretta and Oliver Lynn, she suffered from emphysema and it took her life at the age of 64. She died in Waverly, Tenn. near her mother’s home in Hurricane Mills.

Betty helped her mother with various business affairs, often sorting and responding to fan’s letters. In the 1960’s, Betty wrote some songs for her mother, among them “Wine, Women and Song”, “Before I’m Over You”, and “The Home You’re Tearin’ Down.”

She was survived by two daughters, Lynn Markworth and Audrey Dyer and five grandchildren.

Jack trained horses and blacksmithed at the ranch. He died tragically while riding his horse on Hurricane Mills property. In an attempt to ford the Duck River while on horseback, Jack drowned. He was survived by his second wife Barbara and a young daughter. He had two teenage children from his first marriage.

Loretta was in the hospital at the time of her son’s death. She was recovering from exhaustion after being on tour and It fell to her husband to give her the bad news.

Known as Cissie, Clara followed in her mother’s footsteps as a singer of country songs. She married singer/songwriter John Beams, and over the years they’ve traveled and performed with their own band, opening for such marquee acts as Conway Twitty and George Jones.

In 2011, Cissie and her husband released two new albums produced by her mother. It was Loretta’s first time in the producer’s chair. On one of the albums Cissie covered her mom’s old hits. The other album featured songs written and performed by John.

Ernest is a part of the family business. He often opens the show, warming up the audience by singing classic country songs and introducing his mother. They’ve also performed duets together.

The youngest of Lynn’s children and probably the most successful. Together they formed the country band The Lynns in the late nineties. They started out in Nashville playing at a local club and came to the attention of a record label.

The sisters recorded an album for Reprise Records, and charted two singles on the Hot Country Songs chart on Billboard. They were nominated in both 1998 and 1999 for CMA awards for vocal duo of the year.

In 2016, Sister Patsy and John Carter Cash both produced Loretta’s album Full Circle. Recorded over several years, it features reinterpretations of some of her classic hits as well as songs influenced by Appalachian folk.

SHARE
STREAM WITH PASSPORT
Loretta Lynn: Still a Mountain Girl
About the Master

Miles Davis: Birth of the Cool
Atlantic Records: The House that Ahmet Built
Phil Ochs: There But for Fortune
Genius Within: The Inner Life of Glenn Gould
Satchmo: The Life of Louis Armstrong
Janis Joplin: Little Girl Blue