Survey Marilyn Monroe’s life story through the many dazzling photographs of her. 8/9/2012

There are tens of thousands of photographs of Marilyn Monroe in existence, from Hollywood studio stills to candid pictures snapped on the streets of New York. Many of the best-known were taken by the definitive photographers of our time. Their work is brought to new life in American Masters – Marilyn Monroe: Still Life. Here are brief bios of the photographers in the film.

The Photographers of Marilyn Monroe

Following a 1952 photo shoot for ESQUIRE magazine, Monroe and Arnold became friends. Arnold’s book, MARILYN MONROE, chronicles the six photography sessions that took place over the course of 10 years, including a two-month session while Monroe was shooting THE MISFITS. Arnold, a member of Magnum Photos, was awarded the Lifetime Achievement Award from the American Society of Magazine Photographers in 1980. In 1995, she was made a fellow of the Royal Photographic Society and was elected “Master Photographer,” the world’s most prestigious photographic honor, by the International Center of Photography. See Magnum Photos: Eve Arnold, Marilyn: An Appreciation.

After World War II, where he took photographs of General Eisenhower while working for the Army’s Office of Public Relations, Barris became a freelance photographer in Hollywood, where he photographed many stars of the 1950s and 1960s. He is perhaps best known for his work with Monroe, with whom he was collaborating on a book at the time of her death. As part of this project, he is believed to have taken the last photographs of Monroe, which he did not publish until many years after her death. His books include MARILYN: HER LIFE IN HER OWN WORDS. MARILYN by Gloria Steinem featured his photographs.

Sir Cecil Beaton was a war photographer who later captured 50 years of fashion, art and celebrity, from the Duchess and Duke of Windsor to the Rolling Stones, from Gary Cooper to Johnny Weissmuller, and from Jean Cocteau to Pablo Picasso. Many of his photos were taken for VOGUE magazine. One of the highlights of Beaton’s career is his 1956 portrait of Monroe. He also served as a costume and production designer on such films as GIGI and MY FAIR LADY, for which he won Academy Awards.

Born in 1913 in Transylvania, de Dienes emigrated to the U.S. in 1938 with the help of ESQUIRE magazine editor Arnold Gingrich. He worked for ESQUIRE, VOGUE, LIFE and Montgomery Ward. De Dienes is most famous for hiring 19-year-old Marilyn Monroe for her first modeling job in 1945. The two later went on a five-week road trip through California, Nevada, and New Mexico. Photographs from the trip were printed on magazine covers throughout the world and are credited with helping launch her film career. Monroe continued to work with de Dienes for years, posing for thousands of photos.

After serving as a photographic assistant in the United States Army Signal Corps in Germany and France, Erwitt met Edward Steichen and Robert Capa. From 1950 to 1952, Erwitt was a freelance photographer for COLLIER’S, LOOK, LIFE. He became a full member of Magnum in 1954. Erwitt has shot journalistic essays throughout the world and numerous commercial assignments. Since the 1970s, he’s turned toward feature films, television commercials and documentaries. Following the publication of his book SON OF BITCH, he became famous as a maker of funny pictures where dogs play the starring roles. His most famous images include Khrushchev and Nixon arguing in Moscow in 1959 and Marilyn Monroe with the cast of THE MISFITS.

For a week in 1955, on assignment for REDBOOK, photojournalist Ed Feingersh took photos of Monroe in New York City, including one of her in a camel hair coat on an IRT platform, unrecognized by other subway riders. The negatives were found in a warehouse decades after his death. The photos, which include her entrance into Madison Square Garden on an elephant, were collected in the book, MARILYN: MARCH, 1955.

Greene’s work has appeared in LIFE, LOOK, HARPER’S BAZAAR, TOWN & COUNTRY, and VOGUE. His subjects have included Monroe, Frank Sinatra, Grace Kelly, Marlene Dietrich, Elizabeth Taylor, Groucho Marx, Andy Warhol, Dizzy Gillespie, and Norman Mailer. He is best remembered for his friendship and business relationship with Monroe, whom he first photographed for LOOK. They eventually formed their own film production company, Marilyn Monroe Productions, which produced BUS STOP and THE PRINCE AND THE SHOWGIRL. Before marrying Arthur Miller, Monroe lived with Greene and his family in Connecticut, where Greene took many classic photos of the star. During their 10 years together, Greene photographed Monroe in countless sessions, including the famous “black” sitting. He also took the photos for Monroe’s autobiography, MY STORY, and collaborated with Norman Mailer on a fictional autobiography, OF WOMEN AND THEIR ELEGANCE. See a montage of his photos of Marilyn cloaked in black velvet in the video Marilyn Monroe: Black Sitting.

Halsman began his career as a portrait photographer in Paris; his work appeared in magazines such as VOGUE. During the war, Halsman was trapped under military rule because of his Latvian citizenship. He went to New York City and began working for LIFE after the intervention of family friend Albert Einstein. His portfolio included Audrey Hepburn, Alfred Hitchcock, Robert Kennedy, and Richard Nixon. He had a 30-year collaboration with surreal artist Salvador Dali and became famous for his “jump shots,” where he asked subjects to jump in the air. One of his most famous jump shots is of Monroe. In 1958, Halsman was listed in POPULAR PHOTOGRAPHY’s “World’s Ten Greatest Photographers,” and in 1975 he received the Life Achievement in Photography Award from the American Society of Magazine Photographers.

Bob Henriques was a photojournalist who became renowned for his photos of timeless icons, such as Monroe on THE SEVEN YEAR ITCH. Henriques also worked on the sets of other major motion pictures and for major magazines. His work has been exhibited in both Europe and the United States. Henriques also photographed Fidel Castro in Havana. The majority of his work has since been lost.
— Bob Henriques talks about Marilyn in our Marilyn Monroe: Street Scenes video.

Early in his career, Kelley worked for the Associated Press in New York, where he covered the Lindbergh kidnapping. Then he worked for TOWN AND COUNTRY magazine. He went to California in 1935, where he photographed numerous movie stars, including Monroe. After a long Hollywood career he turned to commercial photography. Kelley took the famous nudes of Monroe, then an out-of-work actress, posing on a bolt of bright red velvet cloth, for which she earned $50. The photo was turned into a calendar and, eventually, the first PLAYBOY centerfold.

Born in Canada, Kirkland spent much of his early professional life in New York before relocating to Los Angeles in the mid-1970s. He worked for LOOK and LIFE, photographing Monroe, Elizabeth Taylor and Marlene Dietrich, among others. Kirkland’s most famous image is a photo of Monroe naked except for a loosely draped sheet and pillow. He also worked on the sets of more than 100 films, including BUTCH CASSIDY AND THE SUNDANCE KID, 2001, OUT OF ARFICA and TITANIC. He is best known for his commercial photography and fine arts work.
— Douglas Kirkland discusses the Marilyn he know in our Additional Footage section.

Newman captured Monroe in some of her final portraits. He has been quoted as saying she was “the saddest woman I’ve ever known.” His body of work includes the official presidential portrait of Lyndon B. Johnson as well as portraits of some of the world’s best-known people, including Igor Stravinsky, Grandma Moses, Cecil Beaton and Andy Warhol. He also photographed artists such as Marc Chagall, Marcel Duchamp, Picasso, Braque, and Miró. Newman’s work has appeared on the covers of LIFE and LOOK. One of the world’s most admired photographers, he is credited with popularizing environmental portraiture and known for rejecting the idea of celebrity. Newman died in June 2006.

Nygards is perhaps best known for taking a nude photograph of Monroe two months before her death in 1962. At the time, he was working as Bert Stern’s photo assistant in what has been called “the last sitting.” He snapped the now-famous photo of her reclining on a bed at the Bel Air Hotel in Los Angeles. He tells the story of that shot in the video Marilyn Monroe: Nude.

From 1948, Ben and his brother Sid worked together on hundreds of stories for Parade magazine, and he took photos of Monroe during three different sessions in 1951, ’52 and ’53. Ross’ work also appeared in LOOK, PEOPLE and STERN, as well as in many books. In 2002 he was presented with the Lifetime Achievement Award by Photographic Administrators Incorporated (PAI).

Roy Schatt took numerous iconic photos of actor James Dean, relaxing at home, on the set, and on the streets of New York. Schatt, who studied painting with N. C. Wyeth, later worked as the Circle in the Square theater photographer. He was invited by Lee Strasberg to be an observer at the Actors Studio, where he shot on stage at an audience that included Monroe, Paul Newman, Eli Wallach and Grace Kelly. He went on to photograph the likes of Rod Steiger, Shelley Winters, Michael Gazzo, Joanne Woodward, Fred Zinnemann, Patricia Neal, Budd Shulberg, Elia Kazan, Arthur Penn, and Ben Gazzara.

Shaw began his career with COLLIER’S MAGAZINE in the 1940s but soon began shooting documentary photos of New Orleans jazz musicians, sharecroppers and coal miners. By 1951 he was working in Hollywood. During filming of Monroe’s THE SEVEN YEAR ITCH Shaw took the best known of the many images of Marilyn, over the subway grate. He continued to shoot her through most of her professional life, as well as many other movie stars. In the 1960s he worked as a film producer, starting with the Paul Newman film, PARIS BLUES. He also worked with director John Cassavetes, producing a series of films where the actors created their characters on screen through improvisation.
— Sam Shaw’s adult children discuss growing up with Marilyn in our Sam Shaw video.

Stern has photographed some of the most famous people in the world, including Monroe, James Dean, Frank Sinatra, Sammy Davis Jr., John Wayne, John Ford, Marlon Brando and Orson Wells. He also worked as a still cameraman on numerous films, including WEST SIDE STORY, JUDGMENT AT NUREMBERG and GUYS AND DOLLS. In the late 1930s, Stern shot photos for the POLICE GAZETTE and joined FRIDAY magazine in 1939, becoming its Hollywood bureau chief in 1941. When the publication folded, he became a free-lancer for LIFE, where he worked for the next four decades. As an independent photographer, he also shot photos for COLLIER’S, THE SATURDAY EVENING POST, TIME and NEWSWEEK.

Zimbel took classic images of Monroe, as well as photos of many other famous figures, including Carol Channing, Eleanor Roosevelt, Helen Keller, Jacqueline Kennedy and many others. He photographed for LIFE and the DAILY NEWS. In 1949, he studied with painter and architecture photographer John Ebstel at the Photo League. He continued to take photographs while in the Army from 1952-53, in England, France, Germany, and Italy. When he returned from the war, his work was published in many leading magazines and newspapers. Photographing Marilyn Monroe during the making of THE SEVEN YEAR ITCH in 1954 produced his best-known images, but he also created an extensive record of Harry S. Truman during his political campaigns.
— George Zimbel discusses the SEVEN YEAR ITCH shoot in our White Halter Dress video. 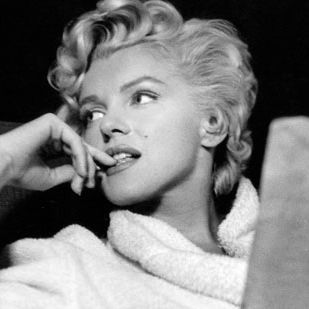 Marilyn Monroe
Actor
Jun 1, 1926 - Aug 5, 1962
VIEW MASTER COLLECTION
QUOTE
"Have you ever noticed how ‘What the hell’ is always the right decision to make?"
— Marilyn Monroe