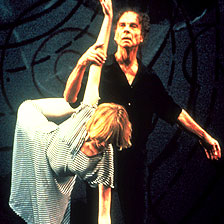 Q: When did you first become aware of Cunningham?

I first met Merce Cunningham in 1971 and in 1974 began collaborating with him over a period of ten years making “media/dances”, works combining dance with film and video, pieces made for the camera. After 1983, I started to work for televison both in the US and in Europe and became involved in creating video installations shown in museums and art galleries.

Q: What first got you interested in doing a film on Merce Cunningham?

In 1999 a French producer asked me if I would be interested in doing a biographical documentary about Merce and his work. This appealed to me for two reasons. One, I had never made this type of televison program before, and secondly, it would give me the pleasure of reacquainting myself with Cunningham’s dances and a chance to work with him again for the first time in more than 15 years. I thought it would be a challenge to convey my admiration and enthusiasm for this man, often thought to a mandarin of 20th century art, to a broad television audience.

Q: Please describe you approach to the film.

My goal in making the film was to create an intimate portrait of a working artist and a unique thinker. Cunningham is still, at age 82, questioning the way he looks at the world. I wanted to tell the story of Cunningham as a legendary dancer and an innovative choreographer developing ideas that revolutionized modern dance. I also wanted to provide glimpses of the playful side of Cunningham, his wry humor, the choreographer as showman.

A Lifetime of Dance