Michael Tilson Thomas talks about the James Brown song that caused him to pull the car over as a teenager in Los Angeles and how he uses that song to this day when training young conductors.

STREAM WITH PASSPORT
Michael Tilson Thomas: Where Now Is
About the Master 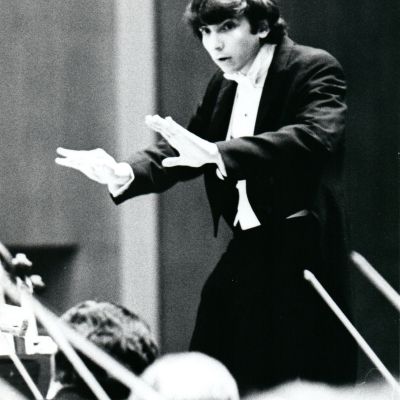 (upbeat music) - Los Angeles was a city of emigres in those years, and everybody had come from somewhere else and been a pretty big deal somewhere else, whether that was in St. Petersburg, or Vienna, or Berlin, or Paris.

(soft music) They were always hoping for the really big movie deal.

This restaurant was kind of like a magical clubhouse in my eyes from the time I was a very young kid, because when I first came here, I came here with my father who was working at Universal and MGM.

And then later I would come here when I was driving around LA in my own car, which typical Angelina I was by age 17 or so.

There I am driving around town.

I'm listening to X CRB radio, and suddenly I hear this music and it's so powerful that I have to pull to the side of the road and listen to it.

And it's 'Cold Sweat,' James Brown.

It's the way he got things together.

His concept of time.

And just before he died, I was able to do a long interview with him.

It was so to gather, it was so exact.

(laughs) - [James] That's all I like, everything has to be right on the money with me.

- Well, I say this to my young conductors, I work with, I say being a conductor means you're trying to get a lot of people to agree where now is.

I knew that because I would say if you... If I said now, then I just missed it.

Because when I said, now it was now.

- And I use that, you know, if I'm rehearsing a piece by Stravinsky, I'll say to the winds and brows, how together do I want this?