In the 1960s, Paul Simon’s moving lyrics to "Bridge Over Troubled Water" was an anthem for a generation. With Art Garfunkel he made moving testaments to the times, fusing folk and rock music. 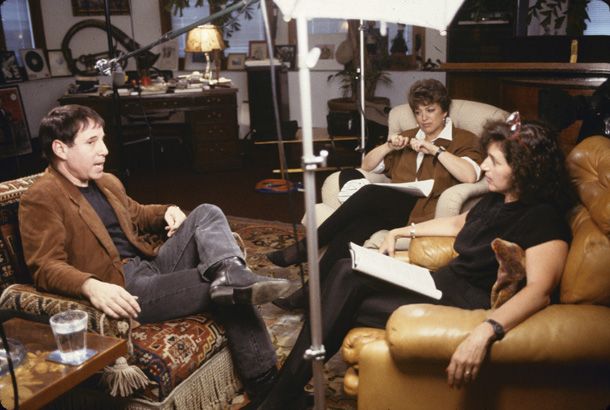 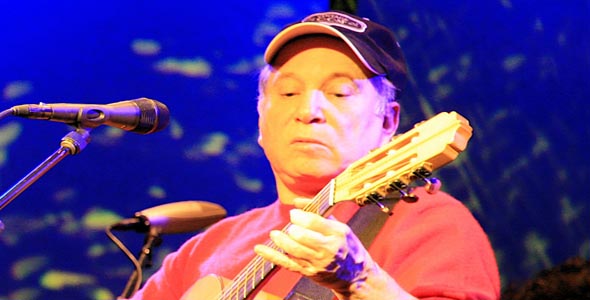 “I believe that we are all connected on this very basic emotional level by music — by rhythm and harmony. But how can we begin to communicate if we don’t use a wider vocabulary? If we don’t speak in someone else’s language, then how can they hear you? So, I’m someone who speaks ‘broken music.'”

In the 1960s, Paul Simon’s moving lyric “Bridge Over Troubled Water” was an anthem for a generation. With Art Garfunkel he made moving testaments to the times, fusing folk and rock music. In the 1980s he pioneered a popular cross-cultural music that brought South African musicians into mainstream America. Recently, Simon finished his most ambitious project yet — “The Capeman,” a Broadway musical. Over his more than forty years in the business, Paul Simon has continued to bring an innovative voice to everything he does.

Born in 1941 in Newark, New Jersey, Simon began his career as a musician while he was still in his teens. Along with Art Garfunkel, he formed the band “Tom and Jerry”. Though they had a hit with “Hey Schoolgirl,” they broke up to go to college and didn’t reunite until 1964. That year, Simon and Garfunkel recorded the album WEDNESDAY MORNING 3AM. The record, that included a number of great songs, including an acoustic version of their well-known “The Sound of Silence,” received a disappointing initial response. It was not until a year later, with a remixed version of the song adding electric instrumentation, which the public began to notice. “The Sound of Silence” became an instant success, and within a short while Paul Simon and Art Garfunkel were household names.

Almost simultaneous with their newfound popularity, was the issue of a solo album by Simon called THE PAUL SIMON SONG BOOK. Though the songbook included such classics as “I Am a Rock” and “Kathy’s Song,” it went almost completely unnoticed. With the popularity of “The Sound of Silence” skyrocketing, Simon concentrated on working with Garfunkel for the next five years. Their soundtrack to the hit film THE GRADUATE, secured their fame and their standing as a major force of the 1960s. With songs like “Cecilia,” “Bridge Over Troubled Water,” and “Scarborough Fair,” the duo became one of the most popular and imitated bands of the time. Yet, due to artistic differences, they went separate ways in 1970.

After the breakup with Garfunkel, Simon put out a self-titled solo album that wowed critics and fans alike. Including “Me and Julio Down by the Schoolyard” and “Mother and Child Reunion” the songs were upbeat, replacing much of the slow folksy sound with jazzier tempos. By 1975, Simon had come out with THERE GOES RHYMN’ SIMON and STILL CRAZY AFTER ALL THESE YEARS, and had his first number one solo hit with,”50 Ways to Leave Your Lover.” The late 1970s and early 1980s were a slow time for Simon, though his Simon and Garfunkel reunion concert and subsequent album were major successes.

In the 1980s Simon began immersing himself in the sounds of Africa, and then Brazil. Simon created an intrinsically global music stamped with his singular style. In 1986, the GRACELAND album, which blended Simon’s contemporary American songwriting with South African music sources and performers, defined a new international music. Simon subsequently took the GRACELAND musicians on his “Born at the Right Time” tour. About the tour he said, “The concept was new, taking players from all over, and fusing them together in a big band sound.” Though controversial, the tour was a major success around the world.

By 1990 he had followed up GRACELAND with THE RHYTHM OF THE SAINTS and four years later was married to singer Edie Brickell. For Simon, the 1990s were a time of continued experimentation, concentrating primarily on a major musical called “The Capeman”. “The Capeman,” was written by Nobel Prize-winning poet Derek Walcott, and produced by Jerry Zachs and Joey McKneely. The musical, about an imprisoned Puerto Rican gang member, met with harsh reviews and ran for only sixty-eight performances. Though a serious disappointment, “The Capeman” proved once again Simon’s ability to push into the experimental realms of popular music. It is this unquenchable spirit that continues to make Paul Simon a major voice in contemporary music. 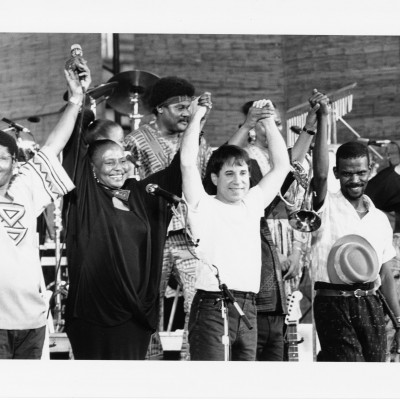