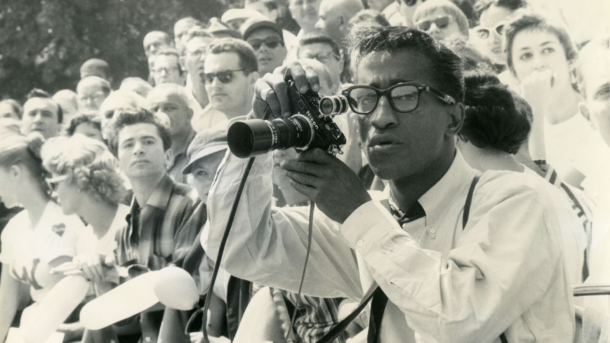 In addition to being an entertainment powerhouse, Sammy Davis, Jr. was also a talented photographer and now, after these photos were dug out of  a warehouse in California, the world finally gets to see his work.

Jerry Lewis gave Sammy Davis, Jr. his first camera in the early 50s, and, according to Burt Boyar’s book, “Photo by Sammy Davis, Jr.,” he became hooked on photography. Boyar notes that while Davis traveled all over with his pack of cameras, his favorite place to shoot was in New York City, where he had to take his photos discreetly and disguise himself in order to not be mobbed by fans. Once you see his photography, it’s clear that his artistic talent was boundless.

Fashion and celebrity photographer Milton Greene––best known for his photo shoots with Marilyn Monroe––taught him how to see as a camera, according to Boyar. Davis losing his eye in a car accident actually worked in his favor because he was able to see the world as a camera lens does, as Greene’s son Joshua recounts in Boyar’s book.

What’s special about Davis’ photography is that his subjects––celebrities like Frank Sinatra, Marilyn Monroe, Paul Newman, Jerry Lewis and Kim Novak––are mostly shot in their own element. His famous subjects are shot at ease, offering a different take on what the public eye could ever see. This was mainly because, according to Boyar, Davis never intended to publish his photography.

Take a look and let us know which photo is your favorite shot.