In the wake of the turbulent 1960s, a new style of song and songwriter came to the fore - a style marked by vulnerable introspection and raw, naked emotion.

This year marks the 40th anniversary of Carole King’s landmark album Tapestry and signature song “You’ve Got a Friend,” a Grammy®-winner for both King and James Taylor, whose friendship and performance legacy was cemented at Doug Weston’s famed West Hollywood club the Troubadour. American Masters continues its 25th anniversary season with Troubadours: Carole King / James Taylor & The Rise of the Singer-Songwriter, a first-hand account of the genesis and blossoming of this 1970s music movement, centering on King and Taylor’s historic collaboration and the nightclub that nurtured a community of gifted young artists and budding critical and commercial sensations. The 90-minute documentary film is directed by Emmy®- and Grammy-nominated Morgan Neville and produced by Oscar-nominated Eddie Schmidt. The film has its world premiere in the U.S. Documentary competition at the 2011 Sundance Film Festival in January.

“Evocative and original at the same time, this film is a joy to watch and listen to, reminding us of the deep relationships and collaborations that preceded our contemporary writer/performers,” says Susan Lacy, series creator and executive producer of American Masters, a seven-time winner of the Emmy Award for Outstanding Primetime Non-Fiction Series.

The narrative begins in the ’60s, when Carole King and Gerry Goffin were writing their now-iconic songs at Manhattan’s 1650 Broadway hit factory, and James Taylor was emerging as a folksinger/songwriter. The location then shifts westward to L.A.’s Laurel Canyon, the breeding ground for the burgeoning singer-songwriter community, and to Doug Weston’s Troubadour, where the King/Taylor partnership begins to blossom and a close-knit crew of future legends — including Jackson Browne, Linda Ronstadt, Joni Mitchell, Eagles, and Elton John—performs on the small stage and holds court in the bar, the epicenter of the action.

King says early in the film, “When we sprang out of the box there was just all this generational turbulence, cultural turbulence, and there was a hunger for the intimacy, the personal thing that we did.” Browne provides a further explanation for the singer-songwriter phenomenon: “Maybe what it was is that people who wrote their own songs were in ascendance. The authenticity of somebody telling their own story was what people were interested in.”

Taylor and King’s first performance at the Troubadour was in November 1970. Thirty-seven years later, in November 2007, the two longtime friends, joined by members of their renowned original band – featuring guitarist Kortchmar, bassist Sklar and drummer Kunkel – returned for a three-night, six-show run to celebrate the club’s 50th anniversary. Those historic shows, documented in Hear Music/Concord Music Group’s RIAA gold-certified Live at the Troubadour and broadcast on PBS, serve as the connecting thread of Troubadours, which makes extensive use of the striking footage shot by Emmy-winning video director Martyn Atkins. Neville’s film beautifully captures the vital early days, the poignant homecoming and the subsequent “Troubadour Reunion” world tour, forming a comprehensive and unforgettable portrait of this golden age.

Encore presentations of Troubadours will air on PBS stations as part of special programming throughout March. During these broadcasts viewers who support their local PBS station with a donation can receive as a thank-you gift a special 2-Disc DVD/CD package featuring the documentary on DVD along with a 10-track bonus CD of choice ’70s-era classics such as King’s “It’s Too Late,” Taylor’s “Sweet Baby James,” John’s “Take Me To The Pilot,” Raitt’s “Love Has No Pride,” Ronstadt’s “Desperado,” Warren Zevon’s “Poor Poor Pitiful Me,” Tom Waits’s “Ol’ ‘55,” and Little Feat’s “Dixie Chicken,” among others.

To take American Masters beyond the television broadcast and further explore the themes, stories and personalities of masters past and present, the companion website (pbs.org/americanmasters) offers interviews, essays, photographs, outtakes and other resources.American Masters is made possible by the support of the National Endowment for the Arts and by the Corporation for Public Broadcasting. Additional funding for American Masters is provided by Rosalind P. Walter, The Blanche & Irving Laurie Foundation, Rolf and Elizabeth Rosenthal, Cheryl and Philip Milstein Family, Jack Rudin, The André and Elizabeth Kertész Foundation, Michael & Helen Schaffer Foundation, and public television viewers. Additional funding for Troubadours: Carole King / James Taylor & The Rise of the Singer-Songwriter has been provided by Miriam and Sam Blatt. 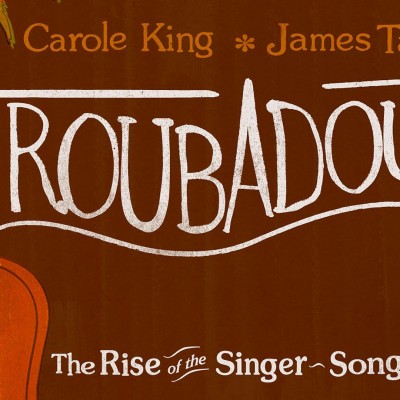