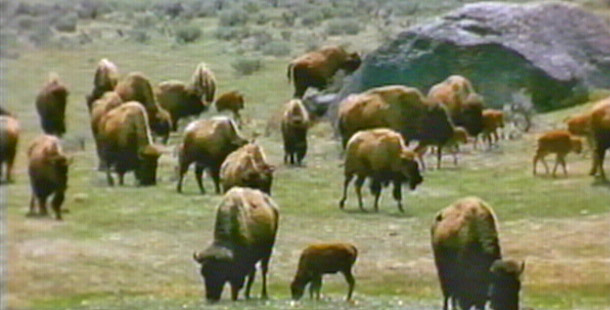 Many Native American tribes revere the bison. South Dakota’s rugged Black Hill country is frigid and raw in winter. But in 1991, the February chill didn’t dampen the enthusiasm of delegates from 19 tribes that gathered there to give the American bison a new lease on life. In forming the Inter-Tribal Bison Cooperative (ITBC), the delegates hoped to restore the bison to millions of acres of tribal lands — and to a central place in tribal life. “We recognize the bison as a symbol of strength and unity,” says Fred DuBray, a member of the Cheyenne River Sioux and former president of the ITBC who appears in American Buffalo. The South Dakota-based group believes that “reintroduction of the buffalo to tribal lands will help heal the spirit of both the Indian people and the buffalo . . . To reestablish healthy buffalo populations on tribal lands is to reestablish hope for Indian people.” So far, more than 40 tribes have joined the effort, which has helped create a collective herd of almost 10,000 animals.

In bringing back the buffalo, the ITBC is attempting to restore a key part of Native American culture. Once, dozens of prairie tribes depended on the bison for food, and their lives revolved around the annual buffalo hunt, which was celebrated in song and ritual like those seen on American Buffalo. The “buffalo people,” as some tribes called the animals, were revered for their power and the good fortune they brought the tribe. “I really believe, like the old people do, that these [animals] have a spirit,” says Gerard Baker, a Plains Indian who appears in SACRED BUFFALO PEOPLE, a documentary film made by the Native American Public Broadcasting Consortium in 1992. “When you shoot them, you can almost feel that spirit around you for a while.”

One place that spirit is now being felt again is the Fort Belknap Reservation, of the Assiniboine and Grow Ventre tribes in northern Montana. There, modern buffalo hunters use helicopters to help manage a herd of 250 bison — part of a larger effort to restore many native animals to the land. On the Pine Ridge Reservation in South Dakota, however, Lakota herdsmen still go out on horseback to round up the herd, which has become an important source of meat. The annual event is followed by a slaughtering ceremony that attracts widespread attention. Indeed, selling bison meat has become a $650 million industry — one that many Native Americans are eager to join. Bringing back buffalo herds, they say, will not only bring in some sorely-needed cash, it will also help realize an old tribal vow. “I love the land and the buffalo,” a Kiowa elder once said, “and I will not part with it. I want you to understand well what I say.” Today, a new generation of Native Americans seeking to restore buffalo to their lands say they understand all too well.