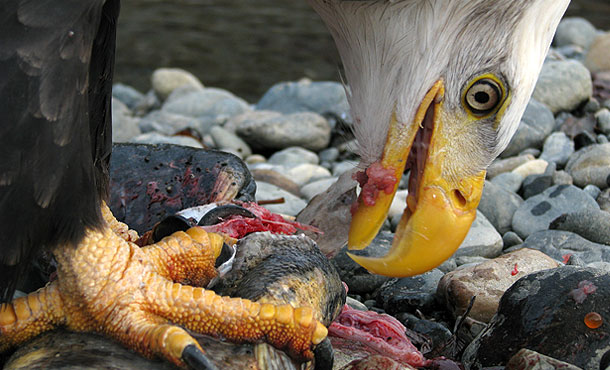 It soars the skies with an effortless elegance. It can catch falling prey mid-flight and even dive-bomb into rivers to snag wriggling salmon. There is no question about it: the American bald eagle is a highly specialized predator. But what is the evolutionary background that allows the bald eagle to pull off these amazing maneuvers?

It may be difficult to believe, but the ancestors of bald eagles have lived on Earth for eons. Evolutionary biologists believe that birds evolved from reptiles. From their skeletal structure to their blood cells, today’s birds share a surprising evolutionary foundation with reptiles. According to biologists, feathers may have evolved from the scales of reptilian skin.

Between 144 million and 66 million years ago, during the Mesozoic era, the first birds began to evolve. Fossil records from this period reveal that the earliest birds had teeth. Eventually, tens of millions of years ago, an ancient group of birds called kites developed. Like today’s bald eagle, early kites are thought to have scavenged and hunted fish.

Finally, about 36 million years ago, the first eagles descended from kites. First to appear were the early sea eagles, which — like kites — continued to prey on fish and whose feet were free of feathers, along with booted eagles, which had feathers below the knee. While no one knows precisely when the bald eagle appeared on the scene, the earliest known fossil remains that closely resemble the bald eagle date back to about a million years ago.

Like the kites, bald eagles have featherless feet, but they also developed a range of other impressive adaptations that help them hunt fish and fowl in a watery environment. Each foot has four powerful toes with sharp talons. Tiny projections on the bottom of their feet called “spicules” help bald eagles grasp their prey. Ospreys, which are also believed to be descendents of kites, have similar projections on their feet. Could these spicules be a remnant of the birds’ shared reptilian ancestry? A bald eagle also has serrations on the roof of its mouth that help it hold slippery fish, and incredibly, the black pigment in its wing feathers has been found to strengthen the feathers against breakage when diving into water.

Obviously, there is much more than their striking white heads that sets these iconic raptors apart from the crowd. Their incredible physiology, built for life near the water, is literally millions of years in the making.