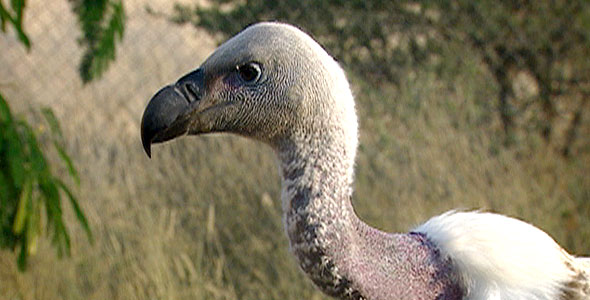 The Cape Griffon, Africa’s heaviest species of vulture, has a distinctive blue-skinned, featherless head and neck, a white ruff at the base of the neck, and honey-colored eyes. Like other vultures, the dark-brown bird, which can weigh over 20 pounds, has a sharp, hooked beak, for ripping apart flesh.

Although relatively little is known about life span of the animals, researchers believe they reach sexual maturity no earlier than five years old, breed in colonies located on cliff faces, and mate for life. A Cape female usually lays only one egg per year, with males and females sharing responsibility for the incubation of the egg.

Like other vultures, the Cape Griffon does not kill its prey, but rather feeds preferentially on the soft tissue and bone fragments of dead animals — usually nothing smaller than an antelope — that they find solely by sight. The vultures look for dead and dying animals and also watch for the distinctive circling behavior of other Capes, which is a sign that they have spotted a carcass. Cape Griffon vultures are extremely gregarious and social — a habit that extends to their eating habits. They are communal eaters and will feed in large groups, composed of sometimes hundreds of vultures.

The birds are considered “vulnerable” to extinction, and have an estimated population in the wild of approximately 8,100. The major threats to the animals are farmers and ranchers who poison the carcasses of dead animals to control scavenging jackals and leopards which may attack their livestock, along with disturbances to breeding colonies, and electrocution, particularly of young birds, on overhead power lines.

Did you know? The Cape Griffon vulture is often harvested for use in “muti” or witch-doctor medicine. The bird is believed by some cultures to have clairvoyant abilities that explain their knack for finding animal carcasses almost immediately after death. Because of this, the birds’ brains are sometimes consumed by individuals seeking clairvoyant power.