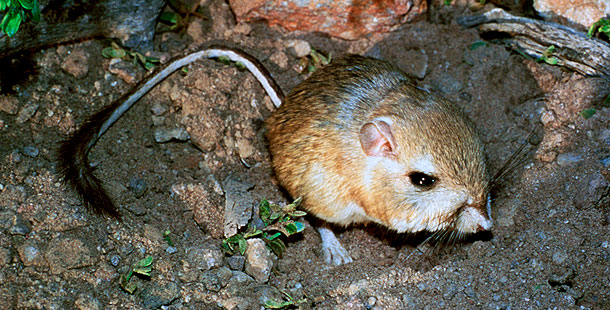 Giant kangaroo rats are aptly named—they bound across California grasslands with their elongated hind legs and feet. Their long tail is used for balance, and their short neck and large, flattened head help giant kangaroo rats travel almost exclusively via bipedal motion. The erratic path of their powerful jumps and top speeds of almost 10 feet per second makes them very hard for predators to catch.

Giant kangaroo rats live alone in underground burrows on sandy slopes. Inside each borrow they keep a large cache of seeds and grains. The rats are nocturnal, coming out every night after sunset to gather more seeds and grains into large expandable pouches in their cheeks to carry back to the burrow. Any seeds or grains that are not completely dried are buried outside the burrow under a thin layer of sand and left to dry before adding to the food hoard. Foraging trips are short. Giant kangaroo rats are very territorial and never leave their den for very long, usually only a total of 15 minutes per day.

Even though giant kangaroo rats are a solitary species, individuals do communicate with each other using scent as well as foot thumping, a behavior in which the rats hit their hind feet against the ground repeatedly. An array of specific signals are used, from single, short thumps, to long, elaborate “footrolls” that can average over 100 drums at 18 drums per second. Foot drumming helps identify neighbors, establish territory, and communicate mating status. Giant kangaroo rats will also approach snakes and foot thump at the predators in an attempt to drive them away.

Giant kangaroo rats are a critically endangered species, restricted to a small area in western central California that is only about 2 percent the size of its former range. Urban and agricultural development in California has caused massive habitat fragmentation, which means the remaining populations will probably become genetically isolated. However, giant kangaroo rats are listed as a state and federal endangered species, and protected lands and policies are in effect to help save the species.

Did you know: Giant kangaroo rats have the most concentrated urine of any North American mammal. Their kidneys are so efficient that they do not need to drink—they get enough water from the seeds they eat.

My Congo
Holy Cow
A Life Among the Clouds: A NATURE Short Film
Dogs in the Land of Lions
Super Cats: Episode 1 | Extreme Lives
Equus "Story of the Horse" | Episode 2: Chasing the Wind