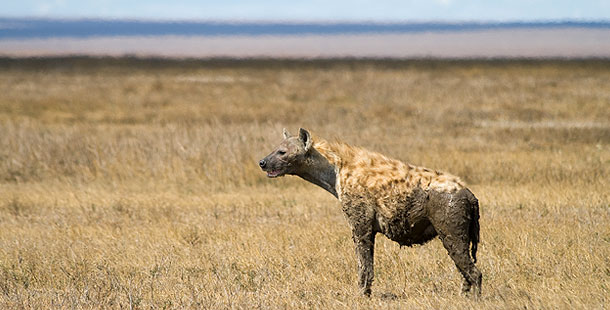 Unlike the three other species in the family Hyaenidae, spotted hyenas are expert hunters. They do scavenge sometimes, but — contrary to popular belief — spotted hyenas catch about 95 percent of their food. Spotted hyenas are both the most abundant and the most successful large predator in Africa. Built for endurance, spotted hyenas often hunt in packs, chasing prey to the point of exhaustion. Then the hyenas move in and use their powerful jaws and strong teeth to bring the hunted animal down. Packs of spotted hyenas can bring down an animal as large as a giraffe, a zebra, or even an African Cape buffalo.

Spotted hyenas have very powerful shoulders and front legs, but their hindquarters are not as well developed, giving the hyena its sloping appearance. Its head is very large, and its jaws are strong enough to split open rhino bones and extract the marrow. The ears are rounded, and the neck long and muscular. Each spotted hyena has a unique spot pattern, although spots can fade with age, especially in females. Females are about 10 percent larger than males, and are also more aggressive.

Spotted hyenas are more closely related to cats than dogs, despite their dog-like appearance. Their closest relatives are actually mongooses and civets. Unlike all other carnivores, spotted hyenas have a complex social system where animals live in female-dominated clans of up to 90 individuals. To live and interact in such a large clan requires a great deal of social intelligence.

These clans closely resemble the social systems of old world primates such as baboons and macaques, where the social rank of a female is solely determined by the social status of its mother. Age, size, and fighting ability play no role in determining the hierarchy, and females on the top of the social ladder have priority access to food. To cope with competition for food, spotted hyenas spend most of their time in subgroups. Even though the whole clan is rarely seen together, each individual can recognize the identity and social rank of every other member of the clan. Spotted hyenas use various different vocalizations to communicate identity and social status, including whoops, growls, groans, and submissive giggles.

Having so many individuals in a clan helps spotted hyenas defend large home ranges, up to 40 square miles. They mark their territory with feces and urine and often patrol their borders. Large clashes or wars between clans over territory can occur. Males in the clan are mainly immigrants and always enter at the bottom of the hierarchy, below the lowest females. Only by making alliances with females can males mate; higher-ranking females choose to mate with males that have been in the clan for the longest. Breeding occurs throughout the year, and females give birth to one to four offspring per litter, though twins are most common.

Did you know:  The female spotted hyena has an enlarged clitoris or pseudo-penis and fused labia housing two pouches of fatty tissue that closely resemble a male scrotum. These features make the sex organs of the female almost indistinguishable from the male.