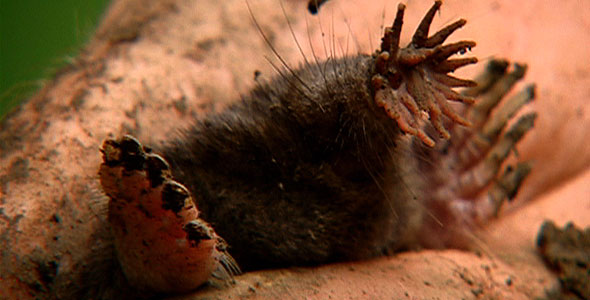 Set aside the 22 fleshy pink tentacles that form the “star” on the nose of this mole, and it remains an odd-looking creature. The mole, which is covered in dense, blackish brown, water-repellent fur (ideal for its life in moist, mucky soil), has broad, scaly feet with large claws for fast digging, a stout cylindrical body, and a long thick tail that swells with fat to three to four times its normal size during the winter. The males’ testes also expand during the mating season (once yearly, roughly mid-March to April, although females may breed a second time if their first litter is unsuccessful), and can reach nearly nine percent of the animal’s entire body weight.

Appropriate to its life largely underground, the star-nosed mole is essentially blind. However, thanks to the tentacled star, the mole has perhaps the best sense of touch of any mammal in the world.

Each of the .03-.16 inch-long (1-4 mm) tentacles is covered by about 25,000 minute touch receptors, known as Eimer’s organs. The receptors come in three varieties, including one that senses the microscopic texture of objects, believed to be unique to the mole. The tentacles, which are also thought able to detect the minute electrical fields produced by aquatic animals as they move through water, move with lightning speed, and can touch as many as 12 objects per second. This allows the mole to rapidly identify and consume small prey, which consist of worms (including leeches), aquatic insects like dragonflies and damselflies, and the occasional terrestrial insect, mollusk, and small fish.

Star-nosed moles are currently relatively common, but the destruction of wetlands could adversely affect their status.

Did you know? The star-nosed mole blows and re-inhales air bubbles underwater as fast as five to ten times per second to track prey.