Is it a brown bear or a grizzly? The answer is that all grizzlies are brown bears, but not all brown bears are grizzlies. The grizzly is a North American subspecies of brown bear with the Latin name Ursus arctos horribilis. The correct scientific name for a grizzly is “brown bear,” but only coastal bears in Alaska and Canada are generally referred to as such, while inland and Arctic bears and those found in the lower 48 States are called grizzly bears. 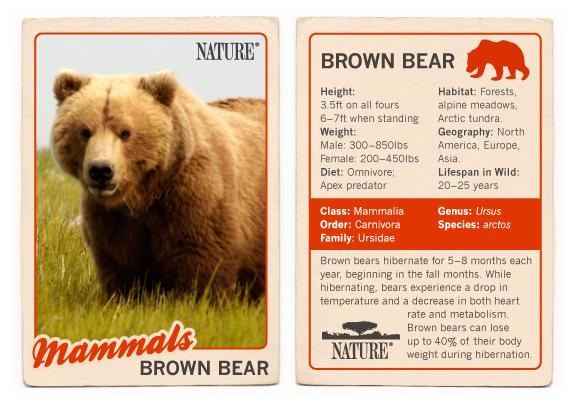 Walking on all fours, brown bears have a height of about 3.5 feet (just over 1 meter). They can reach heights of 6-7 feet (1.5-2.5 meters) when standing on their hind legs. There are regional size differences among bears; brown bears are generally larger in the north—likely due to the colder climates. The largest of the brown bears, is the Kodiak bear (Ursus arctos middendorffi), is found only in the Kodiak archipelago islands along the southeastern coast of Alaska. Kodiaks can stand more than 10 feet (3 meters) tall on their hind legs and 5 feet (1.5 meters) tall when on all fours.

Brown bears exhibit sexual dimorphism, with males being significantly larger than females. This size difference is a result of larger males having better mating success than smaller males.

The coloring of brown bears differs according to environmental conditions, such as diet and temperature, which are specific to the geographical area in which they live. Their fur can be whitish, blond, red, or black, in addition to the typical dark brown.

Brown bears are apex predators, meaning they are at the top of the food chain.

Though brown bears are often perceived as carnivores, they are actually omnivorous. Depending on season, habitat, and region, they can eat grasses, berries, sedges, fungi, mosses, roots, nuts, fruits, honey, insects, birds, and fish (trout, bass, and particularly adult salmon returning to rivers to spawn). In some regions, 80-90% of their diet consists of vegetation. Bears will also hunt mammals such as rodents, mountain sheep, caribou, elk, moose, and will eat carrion, as well.

To prepare for hibernation, in the summer months bears can consume up to 90 pounds (40 kilograms) of food a day, and gain up to 3 pounds (1.3 kilograms) per day. It’s especially important that pregnant females build up their fat reserves so that they are able to nurse their young inside the den.

Brown bears live in a variety of habitats, including forests, woodlands, alpine and subalpine meadows, and even the Arctic tundra. Following the food, they relocate depending on the seasons—living at lower elevations in the spring and higher elevations in wintertime.

Brown bears are the most widely distributed bears in the world. They are found in North America, Europe, and Asia. Two subspecies of brown bear are native to North America: the grizzly bear (U. a. horribilis) and the Kodiak bear (U. a. middendorffi). Grizzlies were once widespread throughout North America, inhabiting the Great Plains region with north/south ranges from Alaska to Mexico, and west/east ranges from California to Ohio. Now, they are found only in four U.S. mainland states: Washington, Idaho, Montana, and Wyoming where fewer than 2000 remain. Brown bears are far more numerous in the state of Alaska where there are an estimated 30,000 bears—about 95% of the entire population in the United States.

Brown bears typically live 20 to 25 years in the wild.

Brown bears reach sexual maturity at an average age of 5 years. The bears locate potential mates primarily by scent, with mating season generally lasting from early May through mid-July. A female usually mates once every 2 to 4 years, and males vigorously compete for the chance to mate with her. In addition, because females mate with several males throughout the season, a male may attempt to guard a female from other males for a period of 1 to 3 weeks after mating. Unlike most mammals, female bears have delayed implantation— the fertilized egg will float in her uterus for approximately five months before implanting. Then, after a gestation period of 180-270 days, the mother gives birth in the den, usually while still hibernating. Cubs are born blind and toothless sometime between December and March, and weigh only about a pound. The sleeping mother nurses the cubs until April or May, when the hibernation period ends. Females can give birth to up to four cubs, but typically have two cubs. Cubs remain with their mothers for 2 to 4 years, during which time the mother usually does not mate. If the mother does mate, the cubs may leave to avoid any aggression from the adult male.

Brown bears hibernate for 5-8 months each year, beginning in the fall months. However, unlike many other hibernating mammals, brown bears do not enter true hibernation; they can wake if disturbed.

Bears hibernate in dens they dig in hillsides, choosing northward-facing slopes to ensure optimal snow cover. While hibernating, bears experience a drop in temperature and a decrease in both heart rate and metabolism. They do not excrete any waste during this time.

Brown bears communicate through sound, movement, and smell. They can express emotions through a series of different vocalizations such as grunts, moans, and growls.

In 1975, the Endangered Species Act listed the brown bear as a threatened species in the lower 48 States.

Logging, mining, and urban expansion result in habitat loss and a decrease in food sources. Habitat destruction also pushes brown bears into more developed areas, making conflicts with humans more likely. Human-caused mortality is the number one cause of bear population decline. Illegal hunting can be a particular problem – especially for small bear populations like those in the lower 48. The reproductive rate of brown bears is very slow, so their populations are unable to “bounce back” easily after they have been depleted.

The Whale Detective
Equus "Story of the Horse" | Episode 2: Chasing the Wind
Running With The Herd: A NATURE Short Film
Dolphins: Spy in the Pod | Part 2
The Good, the Bad, and the Grizzly
Touching the Wild