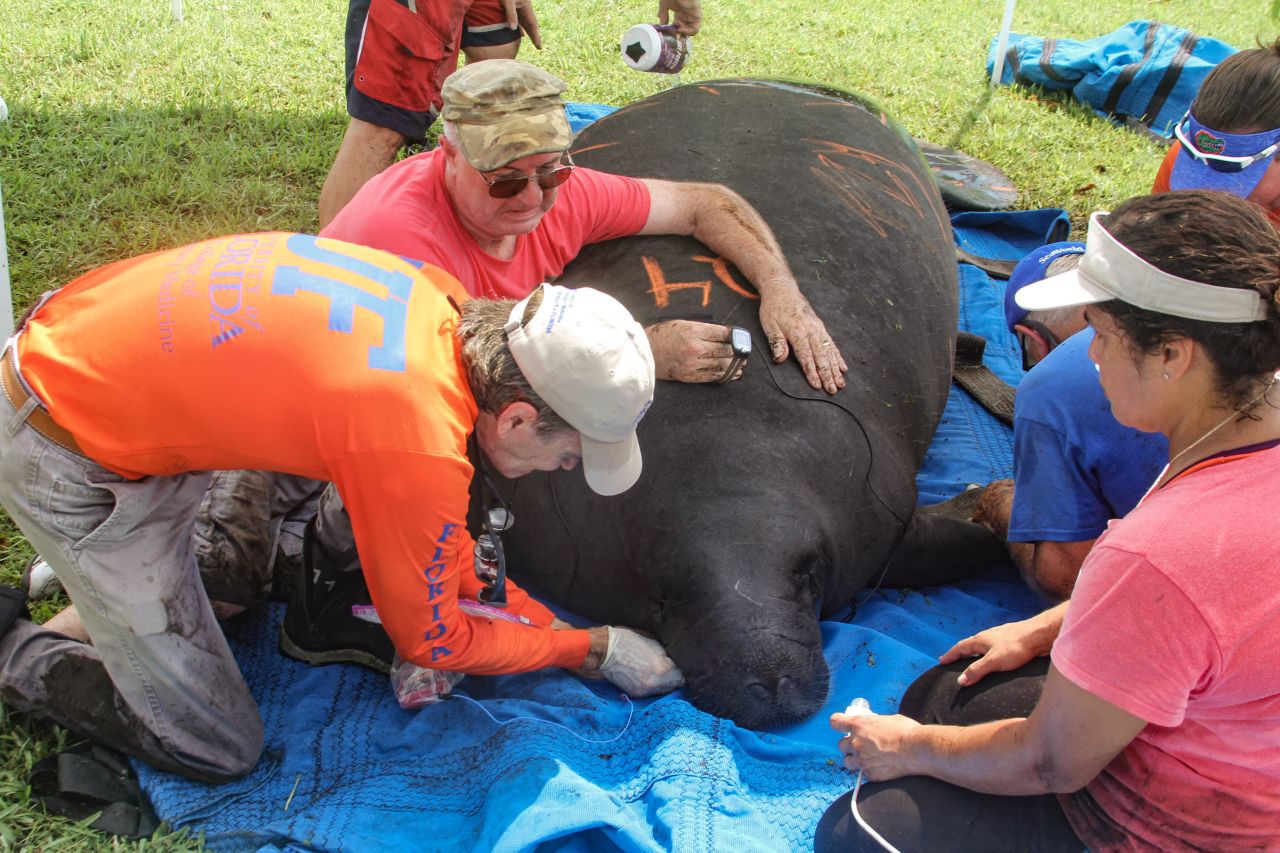 As Hurricane Irma churned along the Florida peninsula, several manatees found themselves in compromising situations. You may have read about two that got stuck in mucky limbo near Sarasota, on the west coast, ahead of the encroaching storm.

“The winds actually pushed water offshore and drained all the bays and estuaries” on the west coast, says Andy Garrett, the manatee rescue coordinator for the Florida Fish and Wildlife Conservation Commission (FWC). He thinks the two manatees were part of a larger group spied earlier that day and just couldn’t keep up as the water receded. Some good Samaritans found them and, with help from two sheriff’s deputies, returned the reluctant landlubbers back to deeper water.

At least 10 Irma-related manatee rescues have occurred, according to Garrett, including one at a roadside canal near Crystal River, on the Gulf coast, and several at a residential pond in Brevard County, on the east coast.

Stranding is a common phenomenon among marine mammals, and tropical storm systems are just one of myriad causes. Sometimes, it’s not until days, weeks, or even years after a major storm has blown through that rescuers discover displaced animals.

Storm surges and flooding can wash coastal species such as bottlenose dolphins and manatees into waterways or canals, or over sea walls and natural embankments that they otherwise couldn’t scale. Once the waters recede, “the animals then become stuck—either stuck completely on dry land, or they’ll be stuck in ponds or water bodies that are not connected to the coast,” or that don’t allow easy passage, says Garrett.

In one memorable case, dozens of bottlenose dolphins survived for several years in Lake Pontchartrain, Louisiana. “The thought is that they came in with the extremely high surge of [Hurricane] Katrina,” says Erin Fougères, the marine mammal stranding program administrator for the National Oceanic and Atmospheric Administration’s Southeast Regional Office. While dolphins use the lake from time to time, they don’t typically reside there year-round, she says. They were thought to have died in 2010.

Occasionally, rescuers will find stranded pelagic species—that is, animals that reside in open water—after a major storm has moved offshore, says Fougères. “It’s possible that large storms could make the animals disoriented, or animals trying to move away from a large storm may end up inshore, but we don’t know if these are the reasons that they strand at these times,” she says.

When it comes to rescuing a stranded marine mammal—either one displaced by a storm or for some other reason—conservationists generally prefer that people leave it to trained responders. “We don’t recommend that people take the matter into their own hands,” says Fougères. “What we really want to tell people is, if you find a stranded animal—a whale, a manatee, a dolphin—please put your own safety above the animal’s safety.”

For instance, while manatees are generally gentle beasts—“you don’t see an aggressive bone in their body,” Garrett says—when stranded, they’re apt to roll around and swat with their tails, which could injure unsuspecting rescuers.

Good intentions can also go awry. “We have had times when people have intervened and caused more problems. They’ve either pushed out a sick animal, or in trying to get the animal to deeper water, they’ll barrel-roll the animal, and the animals will aspirate water and can die from that, so we’d rather them call us and work with us,” says Garrett.

In another rescue during Irma, a citizen released a baby manatee that had washed up on shore back into the water. An infant manatee doesn’t have much chance of survival without adults around, says Garrett, so it’s possible the best option would have been to take it to a rehab facility. Unfortunately, his team didn’t learn about the incident until after the fact.

Fougères encourages people who encounter stranded animals to consult members of the Marine Mammal Stranding Network, which includes non-profit organizations, aquaria, institutions, and agencies, such as the FWC. “Our stranding network is skilled and trained to handle live animal situations,” she says—come rain, or shine.