Australia's male bower bird is an accomplished avian architect that has long fascinated scientists with its remarkably complex courting behavior. 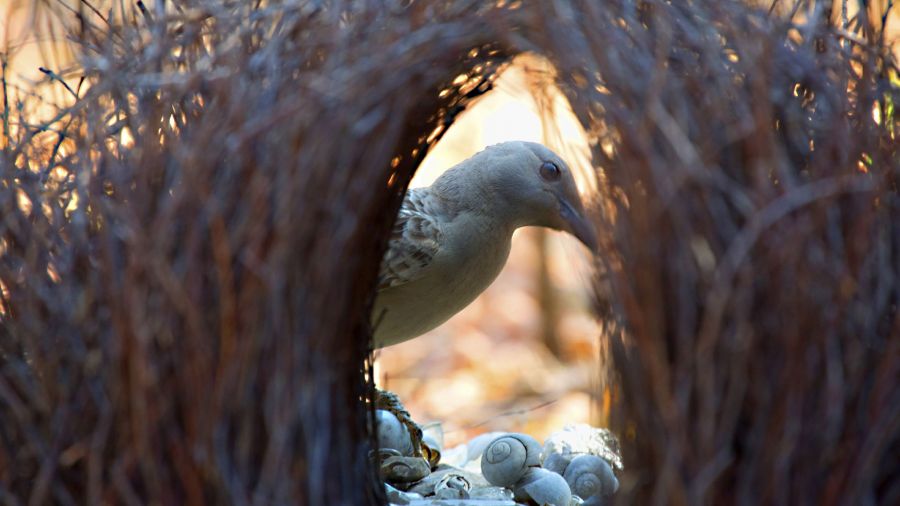 It was one of the biggest breakups in history. More than 40 million years ago, the island continent of Australia snapped free of the vast landmass that included Antarctica and South America and began to drift toward the equator. Cut off from the rest of the world, plant and animal life on the super-island began to go its own way, evolving into forms found nowhere else on earth. 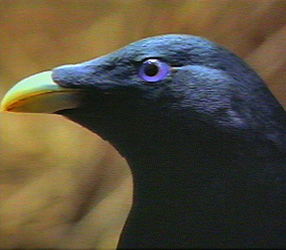 Today, one of the best places to see some of these unique plants and animals is the rainforest of eastern Australia. These misty woods are the dramatic setting for the NATURE program, Bower Bird Blues. At first glance, some of the creatures you’ll see may look familiar. The waddling, sharp-snouted echidna, for instance, looks much like a porcupine or a hedgehog. But it is no ordinary mammal: it is a monotreme, a kind of living fossil that lays lizard-like eggs and incubates them in a pouch. Similarly, the plump Brush turkey looks much like the Toms destined for our Thanksgiving tables. But this is a turkey with a twist: the male builds an enormous mound of rotting leaves, inside of which it incubates eggs. The eggs, however, don’t hold his young — his are being babysat by another male mound-builder! The mutual-aid arrangement helps females ensure that their eggs get careful care. The star of this unusual menagerie, however, is the male bower bird, an accomplished avian architect that has long fascinated scientists with its remarkably complex courting behavior. Instead of using just showy plumes or a romantic melody to attract a mate, the pigeon-sized bower bird constructs an elaborate structure — a bower — on the forest floor from twigs, leaves, and moss. It then decorates the bower with colorful baubles, from feathers and pebbles to berries and shells. The bowers aren’t nests for raising kids; they are bachelor pads designed to attract and seduce one or more mates. When a female arrives to inspect the bower, the male struts and sings. He hopes to convince her to enter the bower, where mating takes place. The female then flies off to build a nest close by, leaving the male to try to convince another female to join in a romantic tryst. Bower birds “exhibit pretty extreme display behaviors,” says Gerald Borgia, a University of Maryland, College Park, biologist who has been studying the birds for nearly two decades. As a result, he says, they are of special interest to scientists seeking to understand how such complex traits evolve and function. His research team, for instance, is using trip-wired surveillance video cameras and robotic birds to probe the hidden world of the bower bird. 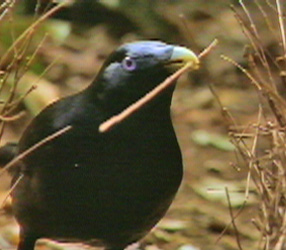 A bower bird builds his “bachelor pad.” Overall, there are 17 kinds of bower birds in Australia and on the neighboring island of New Guinea. Some are known as catbirds, while others are called “gardeners” or “stagemakers.” Each builds its own shape of bower and prefers a different decorating scheme. A few, for instance, surround their bowers with carefully planted lawns of moss. Others have been known to steal shiny coins, spoons, bits of aluminum foil — even a glass eye — in an effort to create the perfect romantic mood. Some, like the iridescent blue Satin bower bird, the star of Bower Bird Blues, even “paint” the walls of their structures with chewed berries or charcoal. For the male Satin, which builds a U-shaped bower from parallel walls of twigs, the favored color is blue. To decorate its “avenue,” as scientists call it, he collects blue feathers, berries, shells, and flowers. While some of these decorations are found in the forest, others are stolen from the bowers of other males; young males, in particular, are prone to this petty thievery. However obtained, the precious knickknacks are then scattered around the bower. The male then waits, passing time by constantly fine-tuning his structure and rearranging the decorations. For many males, the effort will be mostly futile. A younger male, for instance, may be able to seduce only a single one of his dozens of visitors — or none at all. Indeed, many males get not even a single glance: in a recent study, 75 percent of female birds visited only one bower before mating. In contrast, older males often have potential mates constantly stopping by for a peek. These more experienced suitors may mate with dozens of different females in a single breeding season.

Ravens
Snow Chick
Forest of the Lynx
Echo: An Elephant to Remember
Life in Death Valley
The Reptiles: Snakes