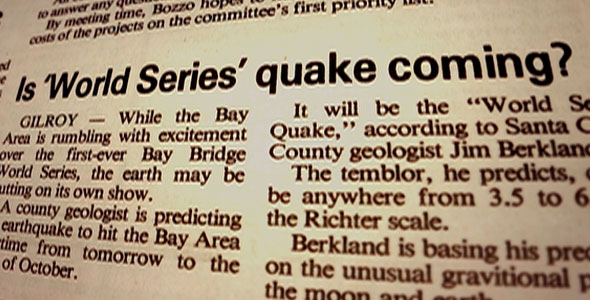 Researchers say it’s probably a little bit of both. Plenty of studies have shown that some animals can sense major changes in the weather. Worms, for instance, are known to flee rising groundwater. Birds are known to be sensitive to air pressure changes, and often hunker down before a big storm. And in Florida, researchers studying tagged sharks say they flee to deeper water just before a big hurricane arrives. They also may be sensing the air and water pressure changes caused by the big storm.

“I think these animals are more attuned to their environment than we give them credit for,” Michelle Heupel, a scientist at the Mote Marine Laboratory who worked on the shark study, has told reporters. “When things change, they may not understand why it’s happening, but the change itself may trigger some instinct to move to an area that is safer for them.”

But can your kitty or puppy give you a cue that a big quake is coming? Researchers are skeptical. After years of study, the U.S. Geological Survey has this to say: “Changes in animal behavior cannot be used to predict earthquakes. Even though there have been documented cases of unusual animal behavior prior to earthquakes, a reproducible connection between a specific behavior and the occurrence of an earthquake has not been made. Animals change their behavior for many reasons and given that an earthquake can shake millions of people, it is likely that a few of their pets will, by chance, be acting strangely before an earthquake.”

What about other animal trends? In NATURE’s Can Animals Predict Disaster?, for instance, one geologist says he sees an increasing number of missing pets documented in the local classified ads just before an earthquake strikes in California. He, in fact, predicted the famous San Francisco earthquake of 1989. The theory is that the animals are fleeing the impending quake.

Similarly, scientists are skeptical that any special “sixth sense” helped animals survive the great tsunami that swept the Indian Ocean in 2004. After the wave, people reported seeing animals fleeing to forests on high ground and finding few bodies of dead animals. But scientists note that little hard data exists, and that many animals may have survived simply because they are strong swimmers or able to scamper up trees.

Still, researchers like Liz Von Muggenthaler — who appears in NATURE’s Can Animals Predict Disaster? — believe animals can pick up the “infrasonic” sound pulses created by storms and earthquakes, and get a head start on fleeing to safety. It would make sense, she says, that the animals learn to associate such signals with danger.

But we should be careful not to give animals super-powers, says Whit Gibbons, an ecologist at the University of Georgia. “I always like stories of animals outsmarting humans, [but] I really don’t think animals have any special powers beyond those that help them in their daily lives,” writes Gibbons. “I do not doubt that many animals detect certain natural signals, such as the early tremblings of an earthquake, long before humans. This means they have opportunity to react before we can. But to think they are reacting any differently from someone who runs for an exit at a shout of ‘fire’ is to give wildlife more credit than is deserved.”

“As far as running inland to get away from a tsunami, I think an antelope, flamingo, or any other fast animal would probably do so because that’s where the forests are. Feeling a trembling earth, even if minutes before we would feel it, would not give much guidance to a running or flying animal other than a response to seek safety. The woods are the safest place for most animals, so when they flee from a shoreline they go inland, which means not only woods but higher ground. Completely natural and not at all mystical.”

Bill Barklow, a researcher who appears in this week’s NATURE, also believes animals aren’t specially adapted to avoid disaster. “I think it’s really unlikely that hippos or any animal has evolved behavior to avoid tsunamis specifically,” he says. “When they hear these infrasonic sounds that are produced by earthquakes, which happen very infrequently, they probably are just terrified of that very deep, heavy sound coming from a wide angle distant area and they just want to get out of there. So there’s a secondary benefit here. They haven’t evolved an escape behavior for tsunamis, but they are responding to infrasound, which has evolved for communication purposes.”