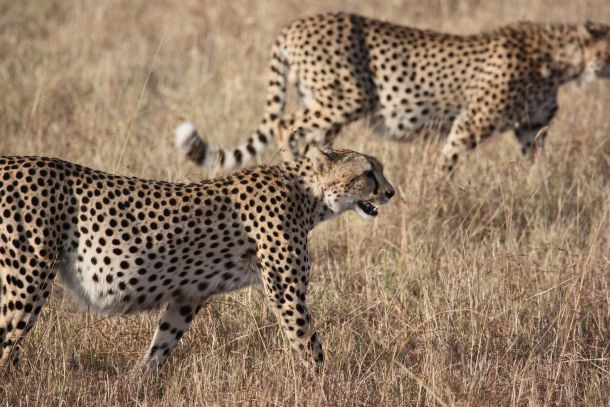 The golden-yellow, black-spotted cheetah’s speed is legendary; it can reach a velocity of 65 miles per hour and accelerate from 0-70 mph in just 3 seconds. But cheetahs have many other unique features. Unlike other big cats, they do not roar, but can purr (in addition to producing many other types of vocalizations); they are also the only cats that cannot completely retract their claws, which gives the cheetahs extra grip during high-speed pursuits, like the cleats on athletic shoes. The cheetah has a deep chest with an enlarged heart and lungs, a flexible spine, large nostrils for increased oxygen intake, high-set eyes with a 210-degree field of view, and black “tear marks” running from the corners of the eyes, down the sides of the nose, to the mouth; the marks cut glare during the animals’ daytime hunts.

Female cheetahs reach sexual maturity around 20 to 24 months and mate throughout the year. They are sexually promiscuous, and often have litters of cubs fathered by different males. Cubs have an extremely high mortality rate, contributing to the cheetah’s threatened status. Other risks to the animals include inbreeding, habitat loss, and a reduction in prey species.

With the exception of some mother-daughter pairs, female cheetahs are generally solitary and hunt alone; like males, their primary prey consists of hoofed mammals weighing less than 90 lbs, like gazelles and young wildebeest, plus smaller game like hares and warthogs, which they overtake, knock over, then suffocate with a bite to the neck. Females raise their cubs on their own. After 18 months, the mother departs, and the cubs form a sibling group that stays together another 6 months. The female cubs then leave, and the males remain together for life in a group called a “coalition.”

Did you know? During a high-speed chase, the cheetah uses its long tail like a rudder to help it steer and make sharp turns.