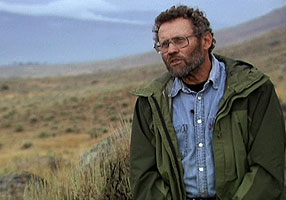 Wildlife cinematographer Bob Landis once taught high school math in Billings, Montana, filming wildlife on the side. But once he sold his first commissioned film, he decided to change course and focus solely on filmmaking.

Now he spends day after day filming in Yellowstone, living out of an old log cabin that has been updated with some modern amenities. His long list of credits includes NATURE’s In the Valley of the Wolves.

Submit your questions for Bob Landis in the comments field below, and he’ll respond during the week of January 18.

I was wondering if you knew how the druid pack is doing now?

A note on mange – a male from the Molly’s pack had such bad mange last year he hardly had any hair at all. But this year he is doing quite well and his coat looks great.

I was wondering, if you and the crew were the only “meat” around, how did you keep from becoming wolf or bear dinner?

Filming in Yellowstone is like no other place. Most of the time, I am filming from the road right next to tourists. I’m near my vehicle, and the animals are used to seeing people in that context.

As for the danger from wolves and bears, there was one bear-related death in Yellowstone about 20 years ago. It’s a very rare occurrence when humans turn into bear food in the park. And I’ve never been threatened by wolves even though they sometimes come in quite close. The fact that bison, elk, bears, and wolves are so accessible here is one of the most extraordinary things about Yellowstone.

I was wondering how long it took you to accumulate all the footage for your new film.

There’s footage in CLASH that goes back four years. I go out to film every day but often film an animal that doesn’t get into my current project. Then I have that footage to use in the next film. But, really, it takes quite a few years to get all the bear/wolf footage I need for an hour-long film.

In the early days of wolf reintroduction, there was a reduction of coyotes of about 50 percent in Lamar Valley, and those numbers were simply extrapolated throughout the park — even in places where there were no wolves at all. But now, fifteen years on, coyote numbers have come back (even in Lamar), and park biologists now believe that there are at least as many coyotes as there were before wolves were reintroduced. I see about five or six from the road every day.

I am making my first trip to Yellowstone and the Tetons this summer. I enjoyed “In the Valley of the Wolves”. Is the Lamar Valley the best place to view wolves in Yellowstone or are there other places to view?

The Lamar Valley is part of what we call The Northern Range, and the road that runs from Mammoth through Lamar all the way to Cooke City will afford you the best chance to see wolves in the park. Wow, your first trip to Yellowstone! That takes me back. Have a wonderful time.

What do you think of the tragedy of the wolf pack that was annihilated and was a part of Yellowstone as a result of the Montana wolf hunts as of late?

I was very disappointed when Montana Fish and Game had an early opening to the wolf hunt north of the park. If they had delayed that hunt until the general elk hunting season, those wolves would probably not have been outside of the park and exposed to hunting pressure. They might well have colonized the Slough Creek Pack’s territory, which had been left vacant when the Slough Creek Pack dissolved. There is still no pack that dens in that area, and we are waiting to see how things sort out this spring.

Wondering if you have to pay for a daily park filming fee or an annual fee?

The Park permitting system sure has gotten complicated. As an individual with a camera, which is how I work most of the time, I pay an annual fee of $200. To film with a crew, I would have to pay a location fee of $150 per day. Whenever I film in the thermal areas, I must have a park monitor with me and that’s an additional $60 per hour for a minimum of three hours. That usually ends up at about $500 per day. The filming regulations and fees in National Parks are continuing to evolve.

My best friend Alan Sachanowski lives there in Yellowstone. He has taken many pictures of a bear called Rosie. My question is have you ever seen Rosie? Alan said that he did not see her last Year.

Rosie is a Black bear, and her name comes from the fact that she lives in the Roosevelt Lodge area near Tower Junction and along the Canyon Road. She has a red ear tag, which makes her quite recognizable. She was named about 20 years ago, and it’s debated among the community of photographers if “Rosie” is the same bear from year to year. I did not see her last year either. Black bears usually live about 20 years, so we may meet a new “Rosie” this spring – which might well be one of her offspring.

I was wondering, how do you become a wildlife cinematographer?

My own career began as a hobby. It just got out of control. I finally accumulated enough footage to make my first film and that got me started. But I recommend the old-fashioned approach of apprenticing with an established cinematographer or enrolling in a real film school. Montana State University has a good program specifically for wildlife cinematography. Good luck!

I had the pleasure of meeting you a couple years ago on a very cold morning when we were photographing wolves. About how many hours of shooting do you put in to make a one-hour film for television?

I generally put in about 300 days a year and 8 to 10 hours a day depending on the season and the length of daylight. It takes me about two to four years to make an hour of television. When you are out to Yellowstone next time, I look forward to meeting you again along the road – and almost all the mornings are cold!

Do you need two objective lens covers for your Swarovski EL’s? I will bring them up for you when I come up again soon if you do. I saw a photograph of you with your binoculars on and they were missing.

Great to hear from you! I don’t have those lens covers because I find that they get in the way. But thanks for your kind offer. And thanks for the great “Jack’s Jerky.” It always good to feed the photographers if not the bears!

Do you have any plans to use more Hayden wolf footage in future projects? I made sure to tape tonight’s broadcast since it was much better than what we came home with on our little video camera.

Yes, I am currently working on a film that follows the story of one black wolf that was born into the Hayden Pack in 2007. But now the Hayden pack has left the park and been replaced by the Canyon Pack that’s moved into Hayden Valley. It takes a lot to keep up with these wolves! We plan to start editing this story in April and it may be on the air about this time next year. Stay tuned!

Like some of the others I would like to know what HD Cams you used, what audio equipment, lens and filters.

I use a Sony HD Cam and a Canon zoom lens 40 x 14. This one lens is what I use 99 percent of the time. There are filters built into the camera and I don’t use any additional ones. To record sound, I use a Sanheiser shot gun microphone and sometimes record sound right off my camera.

One question: what is the most interesting and/or amazing animal centric event that you have witnessed?

What I really enjoy the most is filming animals just having a good time. They work so hard to make a living that I always feel good when I get to see them relax. My favorite moments from this film are that big bear playing in the water and the wolf pups of the Hayden Valley Pack playing by the river. I don’t think I could pick just one favorite moment after all these years!

The show ended with a bear protecting a kill on Christmas. What happened to the bear? Did he go into hibernation or stay out all winter?

I saw that bear a week later heading up toward the rim of the Yellowstone River Canyon. That’s the last anyone saw of him that winter so we think he denned up there somewhere. He sure took us all by surprise on Christmas morning. Christmas is usually for wolf watchers.

The end of your documentary showed a grizzly protecting a carcass on Christmas Day. My family was fortunate enough to view the same scenario in the Lamar Valley on Christmas Day 2008. Was this sequence shot during this time frame and was it the same bear?

I filmed the Christmas bear at Geode Creek about 15 miles from Lamar on Christmas Day 2008. I didn’t hear of another bear like this, and this behavior was so unusual that I certainly would have heard about it. It must have been the same bear. Is there any chance you were over by Geode Creek? It’s halfway between Mammoth and Tower Junction.

How are the cougars doing in yellowstone in relation the influx of the wolves? I know there are not a whole lot of lions in the park to begin with, and I am sure the wolves will not hesitate to kill one if they had have a chance.

Interesting question. The park has done extensive research on cougars both pre-wolf and post-wolf, and the numbers seem to have stayed about the same. Wolves and lions use different territories and different habitats. But at a carcass, wolves will certainly chase off a lion. I have see this personally. It was very early morning at Slough Creek and three wolves found a lion at a carcass. They chased the lion and it raced off and up into a tree. I know of another case of wolves killing a litter of four lion kittens that were four or five months old and one case of a lion killing a wolf. I don’t know all the details of the latter but I bet it was a lone wolf at a carcass. I think the latest count on the cougar population is about 60 individuals and some of those range outside the park.

SHARE
Features
Clash Encounter of Bears and Wolves
You May Also Like
Equus "Story of the Horse" | Episode 2: Chasing the Wind
Holy Cow
Dogs in the Land of Lions
The Elephants of Africa
Super Cats: Episode 1 | Extreme Lives
The Good, the Bad, and the Grizzly