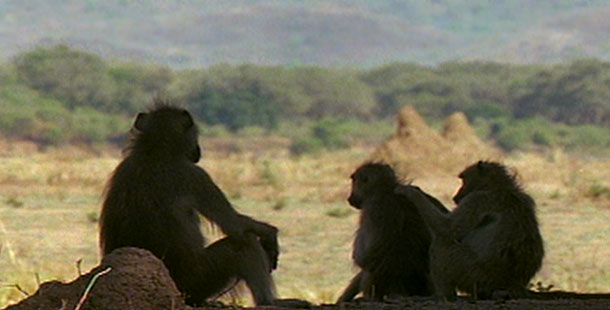 As we learn in NATURE’s Murder in the Troop, life for a chacma baboon is defined by strict hierarchical structure. Among the most highly socialized of animal species, chacmas rely on a complex and varied communication system in order to candidly express themselves to family, friend, and even foe. The following are some examples of the visual signals, vocal gestures, and body language they use to get their message across. 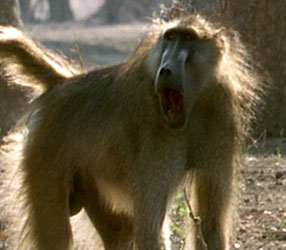 Chacma baboons draw upon a rich repertoire of vocal signals to express themselves. Adult males may assert their dominance in a troop by emitting relatively soft, but threatening “uh huh” sounds that are referred to by primatologists as “grunts.” Grunting commonly precedes a “two-phase bark,” which is a deep, loud “wa-hoo” call, emitted at intervals of 2 to 5 seconds. This call is frequently directed in aggression toward other males or an approaching predator.

But antagonism on the part of a male may evoke the equally powerful vocal response known as “screeching.” In a series of high-pitched screams, male and female baboons of all ages use this vocal tactic in their defense, as it appears to inhibit the hostile behavior of the aggressor.

When retreating from a threatening animal, subadult and adult baboons may emit a short, sharp “yakking” call, while infants and juveniles produce a chirplike “clicking.” These sounds are often coupled with a “fear-grimace” in which the animal retracts its lips and exposes its clenched teeth. This display serves as a pacifying gesture and is used to avert an aggressive encounter. Infants in distress may also emit a cry known as an “ick-ooer,” a two-phased call made through pursed lips.

In the case of immediate danger, all members in a troop, with the exception of the adult males, engage in a “shrill bark” — an explosive, single, sharp cry of alarm that alerts troop-mates to flee. Higher in pitch than the shrill bark is the “doglike bark,” sent out by subadult and adult baboons when members are thought to be separated from the troop.

But not all calls are designed to communicate aggression, fear, or danger. The animals articulate friendly intentions through low, soft “rhythmic grunts,” interpreted as an amiable greeting when one individual approaches another. Juveniles at play are often heard emitting nasal “chattering,” which involves rapid murmurs that signal, at least for the moment, all is well in their world. 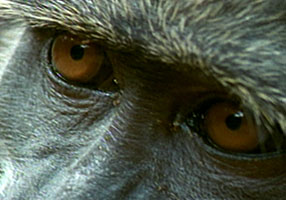 Whether on the giving or the receiving end of a glance, nod, smile, or stare, we can all appreciate the power of visual communication. A look, as they say, is worth a thousand words. Adult male chacmas have earned a “tough guy” reputation. And while violent fights do occur, they can be costly. Injuries sustained during conflict may lead to infection and the inability to forage or travel, and could leave the troop more vulnerable to predators or rivals. Therefore, it is in the baboons’ best interest to avoid coming to blows. Visually assertive displays may serve to get a message across before the situation escalates into a physical brawl.

“Staring” sends a crystal-clear warning. In this penetrating glare, the baboon raises his eyebrows while keeping his eyes trained on his subject. To enhance the menacing effect, he will move his ears back so that the skin on his face and scalp is stretched taut, revealing a differently colored fur beneath his eyes. It is a signal that the recipient would be wise to heed.

A “canine display” is sometimes presented by a lower-ranking male to test a male of higher rank who is consorting with a female. A quick flash of the teeth serves as a threat and is often accompanied by “eyebrow raising,” which is viewed as an antagonistic gesture in itself. In order to avoid a scrap, a baboon on the receiving end of these visual cues may respond by “rapid glancing,” turning his head in the opposite direction and shifting his eyes to ease the tension of the situation. Another means to avert an aggressive encounter is through a “fear grimace,” in which the baboon retracts its lips and exposes its clenched teeth. This expression is usually accepted by the aggressor as a pacifying gesture.

But hostile displays aren’t only directed at troop-mates; they are also useful in defending the group. When a predator or rival troop approaches, an adult male is often effective in repelling them by opening his mouth widely in a “tension yawn,” fully revealing his formidable canine teeth.

Nonaggressive visual cues are also highly important in chacma society. “Social presenting” is a submissive act in which a female or juvenile exhibits their hindquarters to a higher-ranking male. A female may also present to a mother with an infant as a gesture of respect. She often embellishes this act by “lip smacking” to signal her affiliation with the troop. In this display of reassurance, the baboon protrudes and smacks its lips together repeatedly. Along with “teeth chattering,” this is also performed by a dominant male when a female or juvenile is presenting to him. 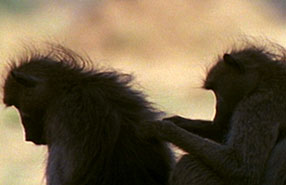 Perhaps no form of communication sends a more vivid and direct message than that of touch. Whether used to extend a friendly greeting, to soothe or support, or even to intimidate, it is difficult to misinterpret the meaning of a tactile signal.

Like all primates, chacma baboons spend a significant amount of time expressing themselves through physical contact, from reassuring touches and pats to antagonistic bites and swats.

When two individuals meet, they will cordially touch muzzles and acknowledge each other in an amiable “nose-to-nose greeting.” Chacmas also engage in “social mounting,” which is generally a response to social presenting. Though it resembles a sexual mount, the baboon has no real intention to mate. In most instances, social mounting signals friendly reassurance, but it has been noted by primatologists to occur during aggressive encounters as well.

But the one form of physical expression held sacrosanct in chacma society is “social grooming.” In addition to the hygenic benefit of removing parasites, dead skin, and debris from the fur, grooming is also thought to reinforce social bonds between animals. For the baboon being groomed, the experience of having its hair pulled is highly pleasurable, as it releases endorphins that produce a natural high. This helps to alleviate stress and build trust among members of the troop. In fact, studies have proven that the levels of stress hormones, called “glucocorticoids,” drop significantly in chacmas after they engage in grooming behavior.

About
Photo Essay: Along the Zambezi River
Inside Chacma Baboon Society
Additional Web and Print Resources