Editors Note: June 21, 2018 – With the sudden news of the passing of Koko, this article has been updated.

It was supposed to be a short-term research project. Instead, it became a lifetime of learning. And, along the way, people learned to see gorillas in a whole new light. 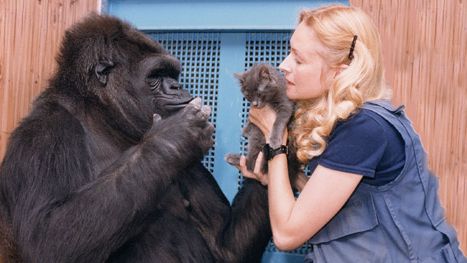 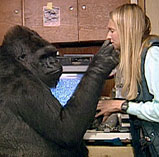 In 1971, Francine “Penny” Patterson was a psychology graduate student at Stanford University in California. Koko was a newborn struggling for life at the San Francisco Zoo. But the young ape — named Hanabi-Ko, Japanese for “fireworks child” in honor of her birth on the 4th of July — managed to pull through. Indeed, by her first birthday she was mature enough for her first meetings with Patterson, who planned to spend just several years working with the ape in a communications experiment.

In those early days, Patterson was intent on finding out whether Koko could learn American Sign Language, a complex set of gestures pioneered by the deaf. Patterson would patiently make the sign for “drink,” for instance, then help Koko’s hand form the word. The gorilla proved an able pupil. Within weeks, Koko was surprising observers by using the signs for “eat,” “drink,” and “more.” Her vocabulary quickly grew to dozens of signs — some customized into a dialect Patterson dubbed Gorilla Sign Language. Soon, news of the “talking gorilla” was making worldwide headlines.

Koko was more than a media curiosity. She was a living challenge to the conventional stereotype that gorillas were slow, stupid apes ambling through the forests. In her kind, soulful eyes, millions of people saw wisdom and intelligence. For the first time, they considered just how similar they were to this surprisingly charismatic creature, one of humankind’s closest relatives on Earth.

While some skeptics question the extent of Koko’s abilities to communicate with humans, Patterson’s work has done much to dispel the idea that gorillas lack intelligence or personality. “Koko’s popularity changed everything,” recalls one researcher who has studied the apes for decades. “She put a friendly face on an animal that had for too long attracted fear, loathing, and disrespect — and helped build public support for protecting endangered wild gorillas.”

Koko learned more than 1,000 words. And Patterson encouraged another little-known gorilla ability: art. Koko and a younger male gorilla who lived with her, Michael, created paintings that appeared to be inspired by their daily experiences at their research facility in California. For instance, Michael painted a black-and-white canvas of his dog. 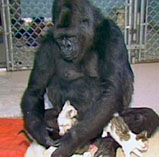 The creative urge isn’t the only thing that gorillas may share with humans. Patterson and her colleagues — who carefully documented the gorillas’ daily behavior and use of signs in an effort to understand how they communicate — have also shown that gorillas experience a range of emotions. There was joy, for instance, in the attachment that Koko formed with a small gray and white tabby kitten, and grief when the kitten was killed in an accident. And there seemed to be longing, too, as Koko has expressed a wistful interest in having a baby of her own.

Efforts to set the 5-foot-tall, 300-pound Koko up with an eligible bachelor ultimately failed. The first suitor, Michael, has became more like a brother. Another male, picked through an extraordinary form of video-dating that allowed Koko to look over her options and make a choice, never became a love interest.

Koko, who was 46, died in her sleep Tuesday morning. Nature-lovers the world over felt the heaviness of this loss. Koko amazed those who had come to know her, whether in person or through books, films, and news stories. Using her hands and her eyes, Koko taught us that we should never underestimate the remarkable creatures who share our world. And her story reminds us that friendships can often bridge seemingly vast gaps, such as the one between a young student and a toddling gorilla.