The horseshoe crab has been on Earth for 350 million years. An ancient and complex anatomy hides within its domed shell. From its 10 eyes to its tube-like heart, the horseshoe crab’s unique physique may surprise you.

When you first look at a horseshoe crab, chances are the first thing that grabs your attention is its large, hard carapace, or shell. Like all invertebrates, the horseshoe crab lacks an internal skeleton. Instead, this external shell acts as an exoskeleton, providing structure from the outside and protection to the animal against predators or other threats. Made of the cellulose-like material called chitin, the shell is so hard that only sharks or sea turtles can penetrate it. The crab will shed its shell continually throughout its lifetime, as many as 17 times, including four times while still inside the egg. 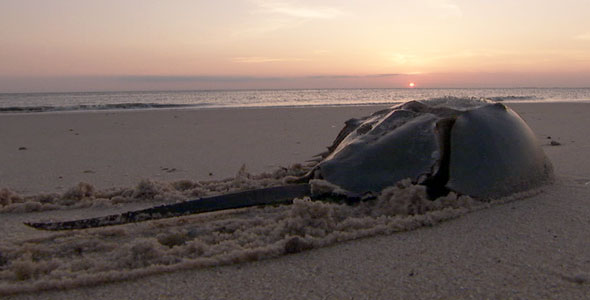 Flip the animal over (gently) and you’ll easily see its six pairs of feeding and walking appendages. Starting from the front of the crab, the first pair of appendages is called the chelicerae. These are feeding appendages used to place food into the animal’s mouth. Going down the body, the next pair of appendages is the pedipalps. These are the first walking legs and they enable the horseshoe crab to move along the rugged seafloor. Each pedipalp has a small claw at the tip except the last pair, the pusher legs. This pair of legs is used for locomotion but also has been equipped with a leaf-like structure that is used for pushing and clearing away sediment as the crab burrows into the sea floor. 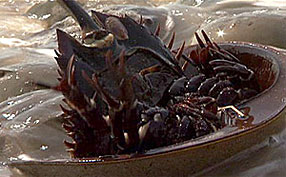 The horseshoe crabs uses its tail as a rudder, and to help it turn over when it gets flipped upside-down.

Don’t let its hard exterior fool you. The horseshoe crab is actually quite a sensitive creature. This invertebrate uses a system of specialized nerves that extend from the brain throughout the body. Several large nerves supply the crab with information about its surroundings, including two optic nerves and eight pairs of hemal nerves that are spread throughout the body.

An interesting feature of the pusher leg is the flabellum, an organ that tests the composition of the water passing to the gill chamber. There are approximately one million sensory cells in this organ alone.

A total of 10 eyes help the horseshoe crab get around. These eyes are distributed around the body including on top of its shell, on the tail and near the mouth to help orient the animal when swimming.

Two compound eyes are easily seen on each side of the animal’s shell. The main function of this set of eyes is to find mates during the spawning season.

On the horseshoe crab’s underside is a series of six page-like structures called book gills. These organs absorb oxygen from the water while keeping the water out. Each gill contains approximately 150 large flap-like membranes called lamellae that look like pages in a book.

The book gills are versatile organs used not only to breathe but also for swimming. Swimming is an alternative mode of transportation used in emergencies, mainly to escape from predators or if the animal finds itself in rough surf. The gills also function as paddles to propel juvenile horseshoe crabs through the water.

The horseshoe crab’s heart is a long tube that runs down the middle of the cephalathorax and abdomen, extending almost the entire length of its body. On average, the heart rate of the horseshoe crab is about 32 beats per minute.

SHARE
STREAM WITH PASSPORT
Crash: A Tale of Two Species

Interview with Larry Niles (March 2011)
Full Episode | Crash: A Tale of Two Species
Filmmaker Allison Argo on the State of the Birds Report – “This Is Why I Make Films”
The Debate
The Benefits of Blue Blood
Why save the red knot?
Additional Web and Print Resources