Brazil nut trees are among the giants of South America's Amazon. They tower up to 200 feet high, and they provide habitat and food for numerous forest creatures. 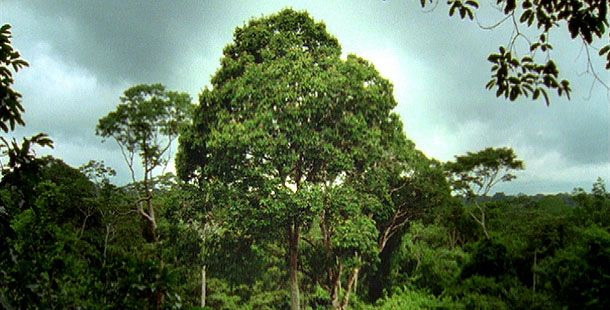 Taking a walk through the Amazon rainforest? Might want to keep an eye out for what look and sound like cannonballs, crashing down from above at more than 50 miles an hour. If you are unlucky enough to be in the way, you could end up dead — or at least severely dazed! 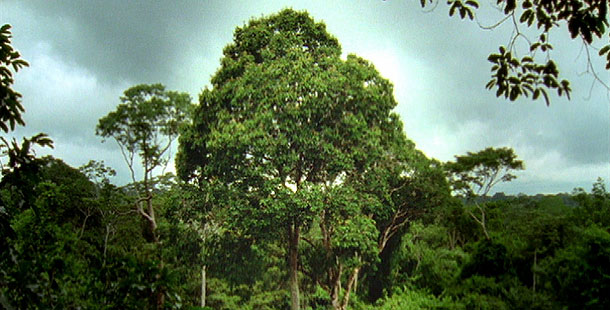 The balls, which can weigh up to 5 pounds, aren’t really fired from a cannon. They are actually the fruit of the Brazil nut tree, one of the most marvelous and mysterious trees in the rainforest. Each ball-shaped fruit or pod holds up to two-dozen seeds we conventionally know as Brazil nuts.

For centuries, however, Brazil nut trees presented a puzzle to biologists. For one thing, they couldn’t figure out what kind of animal was able to break open the rock-hard fruits so that the nuts could sprout into new trees. For another, it wasn’t clear why only trees in undisturbed forests bear fruit.

As NATURE’s Deep Jungle: Monsters of the Forest shows, researchers have begun to solve the Brazil nut’s mysteries. In addition to learning more about the tree’s mysterious existence, viewers get a look at one of the Brazil nut’s archrivals — the incredible strangler fig, which can choke a huge Brazil nut tree to death within a few decades.

Brazil nut trees are among the giants of South America’s Amazon. They tower up to 200 feet high, and their spreading branches and flowers provide habitat and food for numerous forest creatures. The Brazil nut is also the foundation of a global business worth $50 million a year. Collectors harvest the nuts by gathering fallen pods and chopping them open with sharp tools. A single mature tree can produce more than 250 pounds of nuts a year.

But how do the nuts get free from their rock-solid pods in the wild? No Amazon creature, it seemed, had jaws powerful enough to crack open the cannonballs.

One answer, it turns out, is the agouti — a small mammal that looks a bit like a large guinea pig. Agoutis have small, chisel-like teeth that can penetrate the Brazil nut’s seed case. They eat some of the nuts. But, just as important, they carry away and bury others for future meals. If forgotten, these seeds can stay dormant in the soil for years, waiting for the perfect conditions to germinate and grow into a new Brazil nut tree.

The agouti isn’t the only animal that Brazil nut trees need to survive. It appears that they also rely on certain bees, and even other plants, to reproduce. Orchid bees visit flowering Brazil nut trees to collect nectar; as they buzz about feeding, the bees inadvertently carry pollen from tree to tree, fertilizing the flowers and helping the trees produce nuts. For the bees to survive, however, the males must attract mates, and to do that, the male bees need fragrance from a particular orchid to attract female bees. If the forest is damaged and the orchids disappear, so will the bees — and the Brazil nuts.

Forest disturbance isn’t the only threat to Brazil nut trees. Competition also comes from a sneaky plant known as the strangler fig tree. Strangler figs start out as tiny, almost invisible seeds deposited on a branch by small mammals or birds. The seed sprouts, and a tiny root gains a foothold. It’s the beginning of the end.

Eventually, the root creeps down the trunk to the forest floor, stealing water and nutrients from the tree through its bark as it goes. More roots soon join in, wrapping tight around the Brazil nut tree, encasing its victim. Ultimately, over decades, the tree dies, leaving the fig standing like a hollow monument to this epic struggle.