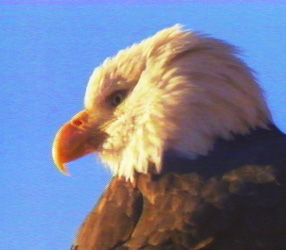 The Bald Eagle almost became extinct. Biologists trying to restore eagle populations around the world face a difficult challenge. But there are success stories — and the restoration of America’s Bald Eagle is one of the most dramatic. When European settlers first arrived in North America, biologists estimate up to 500,000 Bald Eagles soared across its skies. But as colonies grew, people and eagles proved uneasy neighbors. Farmers complained that the eagles ate their chickens and livestock, so they paid hunters to shoot the relatively tame, slow-moving birds. By the turn of the century, the slaughter was government-sponsored: state and federal agencies offered hunters bounties of up to two dollars a bird.

Between 1917 and 1953, the state of Alaska alone paid almost $150,000 to hunters who killed more than 100,000 eagles. Meanwhile, loggers and farmers were clearing the forests where eagles nested and the riverside trees where they liked to roost. The widespread use of pesticides in the 1940s brought a new threat: chemical poisoning. In particular, a pesticide called DDT, used to kill lice and mosquitoes, disrupted eagle reproduction, causing female eagles to lay eggs with thin, easily broken shells.

By 1970, the combined assault had taken its toll: while relatively large populations remained in Alaska, fewer than 1,000 pairs of breeding eagles remained in the lower 48 states. In 1973, after lawmakers created the Endangered Species Act, the eagle was one of the first imperiled species to be given protection under the new law. By 1978, it was listed as endangered in 43 of the lower 48 states, and threatened in the other five.

Slowly, however, one of the world’s biggest wildlife restoration efforts was beginning to take hold. By protecting habitats, banning the use of DDT and other pesticides, and rearing young eagles by hand and then releasing them into the wild, Americans helped their national symbol retake the skies. 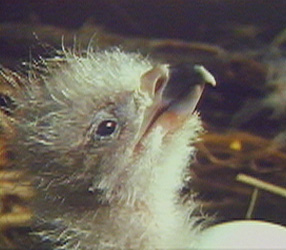 A baby eagle looks toward the sky.

In part, the restoration was made possible by a grassroots education campaign that taught Americans to be proud of their eagles instead of seeing them as threats to be shot out of the skies. In the Southeast, for instance, Doris Mager became internationally known as “Florida’s Eagle Lady” for her tireless education efforts. Since 1974, the conservationist has taken live eagles harmed by humans to more than 200 classrooms a year, letting children get to know the majestic birds. In some classes, Mrs. Mager displays a Bald Eagle whose wing was the victim of a poacher: “Here’s our national emblem,” she tells the kids, “and this is what a gun can do.” Few leave Mrs. Mager’s sessions unmoved.

Other eagle advocates came up with their own creative ways to support restoration. In Wisconsin and other states, citizens have been asked to “adopt an eagle.” The adoption fees, donations of up to several hundred dollars, were used to support biological studies, finance habitats, and rehabilitate injured eagles. Other states ask citizens to help them locate and count eagle nests. In Maine, for instance, local birders have been responsible for finding and ensuring the protection of many of the nests built by the state’s slowly growing eagle population.

Today, thanks to efforts like these, there are an estimated 12,000 eagles — and more than 2,000 nesting pairs — in the lower 48 states. The recovery was so pronounced, in fact, that in 1994, government officials downgraded the eagle from endangered to threatened.

The Bald Eagle is still far from secure. Dozens are still shot every year, and hundreds more lost to collisions with power lines and poisoning. Still, the recovery of the American Bald Eagle has shown people around the world that they need not stand idly by and watch these magnificent birds make a final flight into the sunset.

About
A Rediscovered Species
Additional Web and Print Resources