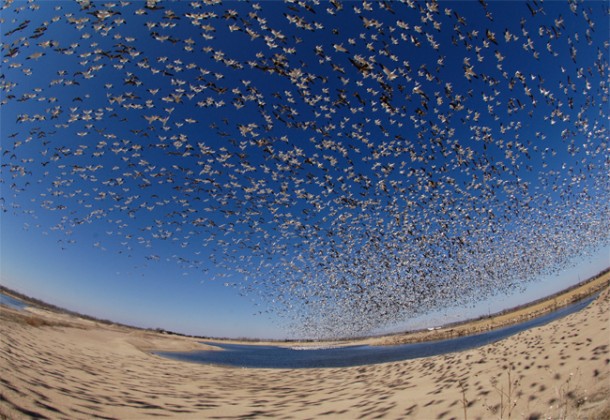 Q: How did you come up with the idea for EARTHFLIGHT?

A: Around 25 years ago, I made a program about bird flight called “In-Flight Movie” (which aired on Nature) that experimented with many new techniques to film birds while flying. For the first time, I put cameras on birds, filmed them wingtip to wingtip from the air as well as from model gliders shaped like birds. I also pioneered the use of a model helicopter as a filming platform. In the intervening years, technology has moved so far it seemed timely to return to these techniques and develop new ones to tell a bigger story; one that allowed us to film birds as they take us to the greatest animal events on the planet.

Q: How long did it take to produce the series?
A: Four years in total

Q: You are known for your innovative approach to wildlife filmmaking. What were some new techniques that you pioneered on EARTHFLIGHT?
A: Many of the techniques built on those pioneered in “In-Flight Movie,” but they were taken, literally, to new heights. For the first time, we were able to mount real HD cameras on condors, vultures and snow geese and see the world as they see it. We used microlights to fly with imprinted birds, filming at high speed over some of the world’s great cities. We created a vulture cam, a model of a flying vulture, which could film from inside the flock. For the first time, we used multi-bladed drones to film massed flocks of 2 million flamingos. In fact, through the course of the series, we must have attached cameras to every conceivable flying device; from paragliders and gliders to full-sized helicopters with stabilized mounts and, of course, the birds themselves.

Q: How do you mount a camera to a bird?
A: The camera-carrying birds wore specially-designed harnesses. They were created to be as comfortable as possible and not interfere with the birds in flight. All the birds were trained to become used to flying with the harness before the camera was added. 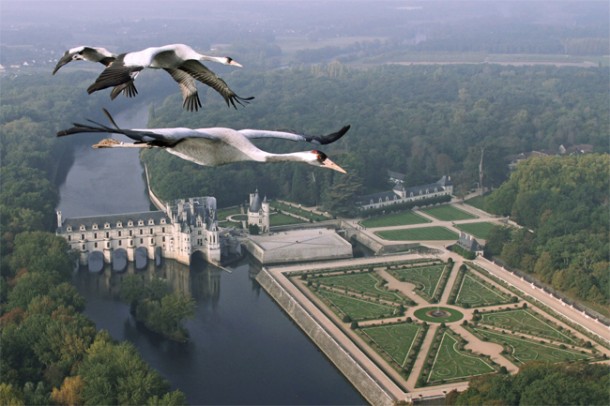 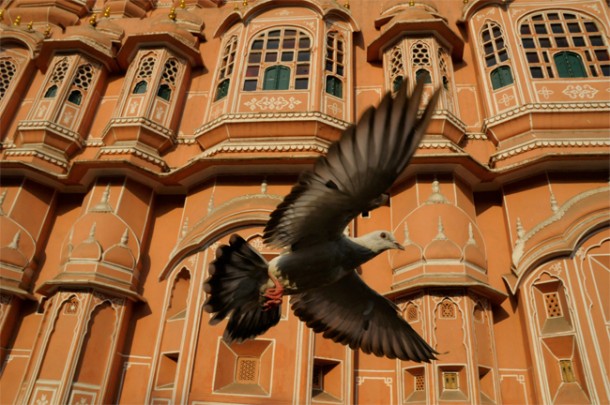 Q: Can you explain what using “imprinted birds” means?
A: Imprinting is a technique where birds are exposed to a foster parent as soon as they hatch. They then react to this surrogate parent as if it were their mother, following “her” wherever she goes. We imprinted our birds on selected crew members so they’d fly alongside their human “mother” as soon as they were able to fly, even if this person was in a moving boat or vehicle or even up in a microlight.

Q: Have you ever raised a bird or flock?
A: The first bird I ever imprinted was a duck. Until then the technique had only been attempted on geese. Originally my plan was for a cameraman to spend the many months required for raising a bird. But the chick hatched in the car as I was travelling to him with the egg in my lap. By the time I reached the cameraman, the bird was imprinted on me and followed me everywhere. In the end, I had to take the bird home. She then lived with me constantly for nearly a year, travelling in my car on the way to the office, sitting on my desk and even going to dinner parties with me. It was a total commitment, but one that rewarded me with one of the best moments of my life as it flew alongside me in a parascender. I was able to film the bird just a foot away – the first time an imprinted bird had been filmed from the air. 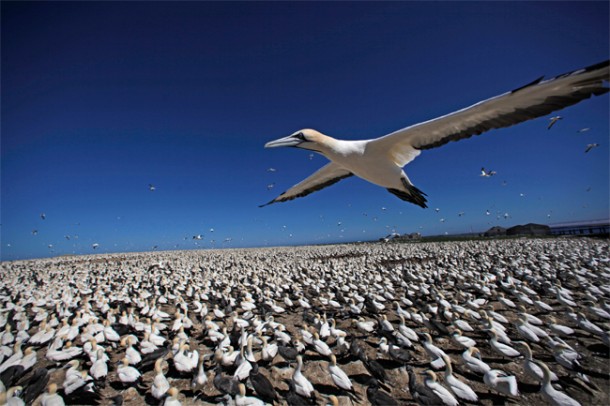 Q: How did you select which birds to film in each continent?
A: The birds were chosen for their iconic status as representatives of a continent. There were usually three main birds in an episode: one was a flock prey species, such as a snow goose or a flamingo; another was a predator, such as a bald eagle or African fish eagle; and there was often a scavenger, such as condor or vulture, too.

Q: What is the greatest challenge to filming birds?
A: They can fly away! But it’s not the only challenge. In EARTHFLIGHT, we wanted to capture the experience of what it was like to be a bird. We didn’t simply want to observe them from afar. Every species is different and each one creates different challenges. But some of the hardest involved making sure we were in the right place at the right time when big natural events were occurring. We soon learned that the birds themselves were the key to getting our timings right. By following flocks of flying pelicans, we were able to arrive at the exact spot where grunion fish were stranding themselves on Mexican beaches to lay eggs. And following gannets off the South African coast led us to the Great Sardine Run – one of the biggest events in nature. This technique became our strategy for filming many of the events in EARTHFLIGHT.

Q: Do you have a favorite sequence in the North America episode?
A: I do love the pelicans and flying devil rays. This had never been filmed before, but within just two days of attempting to film it, we had hundreds of these huge fish taking to the air all around the boat. It’s always exciting to record something that hasn’t been filmed before, but the results were more spectacular than we could have imagined. 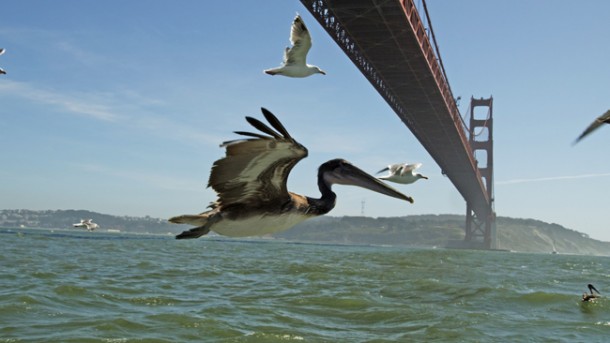 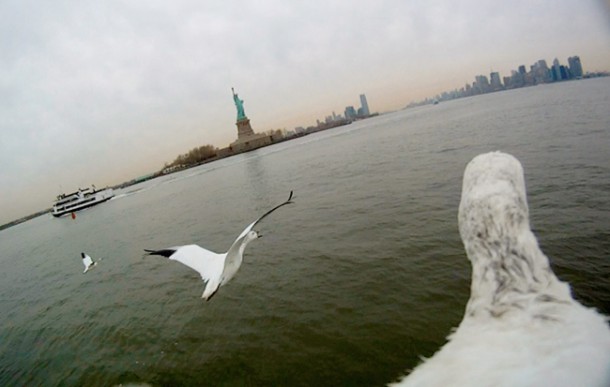 Q: As snow geese demonstrated in the filming of episode one, do trained birds go astray more often in urban locations or was the “Lost in Brooklyn” segment a rarity?
A: If you fly birds in the open air, losing them is an occupational hazard. The problem is the same in built-up areas as well as in the countryside. They are young birds who are beginning to test their wings and this involves making flights away from their parents. The big problem in urban areas is that it is easier to lose sight of them when they come down to ground. Despite the risks, we didn’t lose a single imprinted bird over the whole of the series.

Q: Why do you prefer shooting with wide angle lenses over telephoto lenses?
A: Wide angle lenses give you the feeling of “being there” – the footage shot with these lenses more closely resembles the way we see the world. When you capture birds close up on a wide angle lens, it actually feels like you are in their world. The subject not only has the correct perspective, it also allows you to experience the bird’s environment. 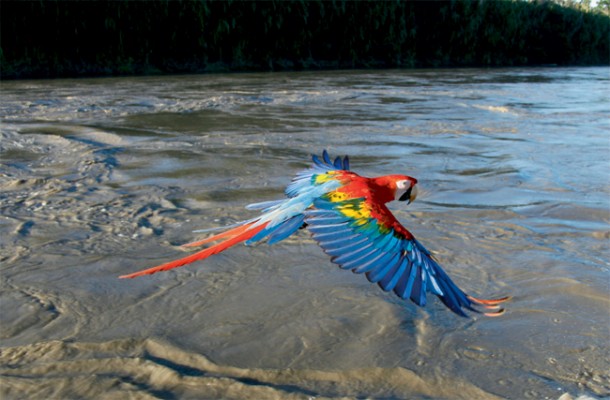 Q: Do you lose a lot of cameras shooting in risky situations?
A: Losing cameras is also an occupational hazard, particularly those left in the firing line of the action. But equally risky is human error, having to set up cameras quickly to respond to the birds means that accidentally dropping them probably causes more damage to the cameras than that caused by water or the birds.

Q: Did you see positive signs of how humans co-exist with birds?
A: It was reassuring that the series didn’t become a depiction of doom and gloom about the state of the planet. All the events we set out to film were still happening and these animal events were as spectacular as we had hoped. It surprised us to discover that snow geese were actually 3 times more numerous than they were 40 years ago and the beautiful Japanese crane had increased in numbers from a low of just 25 birds to over a thousand because of the protection the Japanese have given the birds.

Q: What do you hope EARTHFLIGHT viewers will take away from the series?
A: I hope that people will discover that birds are clever and adaptable creatures often with a complex social life not so different from our own. They have an unrivalled knowledge of the life of the planet and through their remarkable journeys they bring countries and continents together in ways that are constantly surprising.