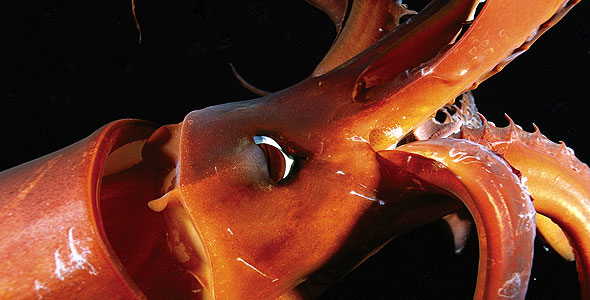 They told him not to go. They told him the animals were dangerous and unpredictable. Diving at night so far offshore was also risky. But did Bob Cranston listen?

The expert underwater cameraman decided to wave off advice from local fishermen along the coast of Mexico and as a result, NATURE’s Encountering Sea Monsters includes some of the most memorable footage ever captured of the giant Humboldt squid.

“It was some pretty hairy diving at times, but it was fascinating and well worth it,” Cranston recalls.

Cranston, a veteran of filming sharks and other dangerous sea creatures, had come to the Sea of Cortez to document an animal locals call “the red devil.” In part, that’s because the Humboldt, which can reach 6 feet long and weigh up to 100 pounds, often has devilishly red skin. But the nickname is also due to the squid’s habit of hunting at night and its notoriously aggressive behavior. Schools of Humboldts have been known to test divers with their sticky tentacles and sharp beak, and blast fishermen with jets of water and purple-black ink. They have also been known to eat each other.

The photographer was aware of the Humboldt’s reputation. Several years ago, Cranston had his first encounter with this cephalopod after following local squid boats out to their nighttime fishing grounds. The fishermen use bright lanterns to lure squid to the surface, then catch them on baited hooks or snare them with specialized spears. Cranston was warned not to swim with the fearsome animals: “Some fishermen [said] the squid literally pulled men into the sea and ate them.”

Cranston dove in anyway, and was soon surrounded by the speedy, powerful animals. A mature Humboldt “can pull you around quite a bit,” Cranston says. “They’ll come up to you and kind of grab hold with their tentacles, test your strength, pull you down, kind of take a little taste. They are very inquisitive. If you resist, they’ll back off. But it is very exciting.”

This encounter made Cranston even more curious about the Humboldt. He became fascinated by the behavior of cephalopods which have special skin cells that allow it to produce a dazzling array of colors. Scientists believe the light shows are used for communication and courtship, but are not exactly sure how. While filming Encountering Sea Monsters, Cranston decided to do a little research of his own.

Cranston wanted to see if filtering his camera lights might make Humboldt squids easier to film. “We use 650 watt lights that are very bright, and this is a nocturnal animal that lives in the deep, dark ocean, so they don’t seem to like them very much. We put some red filters on, assuming that it is a color you don’t see in the deep ocean. And yes, it worked: the squid came in closer.”

Cranston also looked for a way to mimic the flashing colors the squids use to communicate. The solution? A special strobe light that looks like a light saber. “It was a creative approach,” he says.

The experiment produced a memorable moment, recorded on film. As Cranston dives 150 feet down, a curious squid suddenly rises up from deep water and, for a moment, the two make contact in the pulsing light.

“They may seem like aliens to us,” remarks Cranston, “but cephalopods are simply remarkable organisms. They are smart, clever, sophisticated. And there is such a wide variety — from little pajama squids that have tremendous personality to cuttlefish that build [and care for their] nests.”

Cranston is looking forward to capturing more tentacles with his camera. “We’re finding new kinds of cephalopods all the time,” he says, noting that researchers have identified dozens of new species in just the last few years. “So there is always something new and interesting to see.”