Discover the habits of these giant carnivores and find out the polar bears' secrets for surviving in the Arctic. 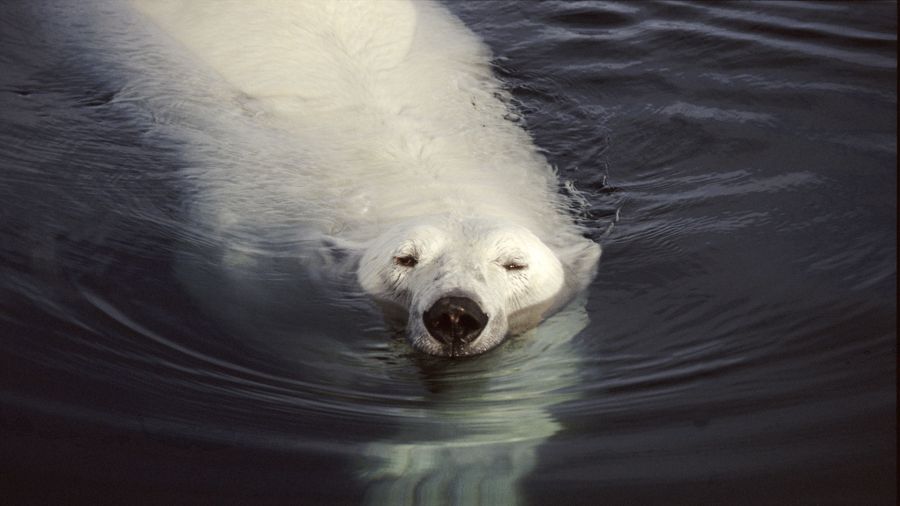 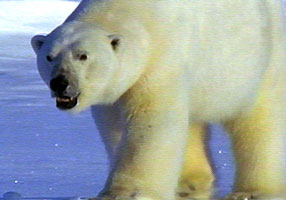 The polar bear rules the north. To the hardy native people who settled the harsh lands of the Arctic, the powerful hunter with the ghostly white coat is known as the “lonely roamer.” But most of us know the huge mammal as the polar bear. And the story of how the world’s largest land predator prospers in one of Earth’s harshest environments is the subject of the NATURE program Great White Bear.

In extraordinary scenes collected across the top of the world, Great White Bear shows that polar bears are prodigious roamers indeed. Single bears have been known to trek and swim as far as 3,000 miles across icy seas and mossy, treeless tundra in search of food. Typically, however, studies suggest the bears stay within a home range that is just a few hundred square miles. Still, polar bears, by far, range over the largest territories of any bear.

The reason for the huge territories, scientists believe, is the unpredictable availability of their favorite food: ringed seals. As Great White Bear shows, populations of this common, four-foot long arctic seal can build up and melt away mysteriously, much like the ice sheets the sleek swimmers often inhabit. In good years, the bears may not have to travel far to find a seal meal. But in bad years the dark, cream-spotted animals are few and far between.

Though polar bears are excellent swimmers — their scientific name, Ursus maritimus, means “sea bear” — they usually aren’t fast enough to catch a seal in open water. Instead, in winter, the bears creep within striking distance of one of the breathing holes the seals have made in the ice. When a seal pops its head out of the hole to catch a breath, as it must do every ten minutes or so, the bear leaps and yanks the unsuspecting bather out of the water.

Sometimes, however, bears take a more direct route: as Great White Bear shows, they will crash through the top layer of the ice itself in an effort to trap the seals that may be resting in the hollow space below.

Ringed seals are a staple of the polar bear diet. In early summer, when the seals like to bask in the warming sun, hunting bears must use a different strategy. They wait until the seals are asleep and then creep close, freezing in place when the snoozers periodically open an eye to check for danger. Eventually, if the seals don’t spot the stalker, the bear gets close enough to make a powerful pounce.

More often than not, however, the seals escape: some studies have shown that bears outwit their prey less than five percent of the time.

But when the hunting is good, bears can be finicky eaters. They will easily polish off a 100-pound meal consisting of the seal’s energy-packed skin and blubber, or fat layer. But they commonly will leave much of the less nutritious muscle behind. Young bears will sometimes devour the leftovers, but it is often another Arctic inhabitant — an Arctic fox or gull — that rushes in to claim a free meal.

It can take a lot of seals to satisfy a polar bear. Males can be ten feet tall and weigh 1,500 pounds, while females are smaller, topping the scales at about 550 pounds. Remarkably, however, the huge animals can withstand lengthy periods without food. Male bears, for instance, are routinely forced to go without a major meal for three or four months each summer, when melting ice prevents them from hunting seals. And pregnant females apparently go without food for eight months — a record among mammals. Mothers even keep fasting for some weeks after their one-pound cubs, usually twins, are born between late November and January. By the time the cubs have left her care one to three years later, however, the mother has rebuilt her energy stores and is ready for another litter.

To survive their forced diets, polar bears burn a thick layer of reserve fat. In some cases, this layer can be up to five inches thick. But the blubber doesn’t just store energy: in winter, it also provides an excellent insulating blanket in temperatures that can plunge to 40 degrees below zero. Other adaptations, such as a small tail and ears and two layers of specialized heat-trapping fur, also help the bears conserve heat. In addition, each hair of a polar bear’s coat is hollow and transparent, helping to draw the sun’s rays toward the bear’s black skin. But when things get too cold, even polar bears must seek shelter, digging out snow caves in which they curl up like giant furry balls.

In summer, however, that same fat can present a problem. Polar bears can easily overheat when they run — which probably explains why they spend much of their time loping across the landscape at such a leisurely pace. In the southern part of their range, where summer temperatures can rise to levels downright blistering for bears, they may even take to the water simply to stay cool. Such strategies have allowed polar bears, which can live for 30 years, to prosper for at least 200,000 years in a challenging Arctic landscape that is by winter enveloped in icy darkness and by summer bathed by a never-setting sun.

But hunting and environmental changes, such as signs that a warming climate could be melting pack ice, may be taking their toll on the bears. And concern is growing about pollutants, such as mercury and other toxic chemicals, that are making their way into the once pristine Arctic food chain. As a result, scientists are keeping an increasingly close eye on the up to 40,000 bears that live in Canada, Russia, Alaska, Greenland, and Norway. “If a polar bear population is healthy, then one can probably safely assume that the rest of the components of that food chain are doing well,” explains a spokesman for the Canadian Wildlife Service, which has sponsored extensive monitoring studies. “However, if problems develop with polar bear populations, it may indicate problems elsewhere in the ecosystem.”

The goal, scientists involved in such studies say, is to make sure that the Arctic’s great white bear continues to roam across the top of the world.

SHARE
Features
Additional Web and Print Resources
Tracking Polar Bears
Land of the Great Bear
You May Also Like
My Bionic Pet
Leave it to Beavers
Extraordinary Dogs
Killers in Eden
CUBA: Wild Island of the Caribbean
Inside the Animal Mind