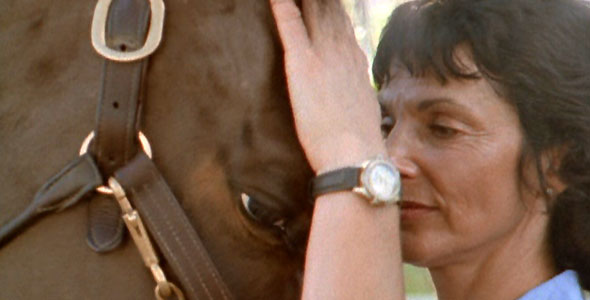 The trio of accomplished horses and riders profiled on NATURE’s Horse and Rider have one thing in common: they know how to communicate. Indeed, when it comes to “cutting” a cow from a thundering herd, chasing down a polo ball at breakneck speed, or developing the discipline necessary to perform the ballet of dressage, horse and rider need to know exactly what the other is thinking. Misunderstandings could literally be fatal.

Such clear communication, however, takes time for both horse and rider to learn. Luckily, a growing number of experienced “horse whisperers” — men and women who have developed a special knack for getting their point across to their mounts — are sharing their secrets with riders, through everything from books and videos to conferences and workshops.

One of these teachers is Mark Rashid, an Estes, Colorado-based cowboy who has written three books on horsemanship (he’s at work on a fourth), and holds dozens of clinics with riders every years. His Web site, Considering the Horse, has become a popular watering hole for riders seeking to develop stronger relationships with their mounts. It offers heaps of practical advice, honed by decades of experience working on cattle and dude ranches, investigating cases of abused horses, and teaching greenhorns and veteran trailriders alike.

NATURE recently caught up with Mark early one morning in Washington State, just before setting out to work with a waiting group of equine and human students.

NATURE: When did you first take to horseback?

Mark Rashid: I’ve been working with horses since I was about 6 years old. I wasn’t raised on a ranch, but there was one about 3 miles from where I lived in Wisconsin. I spent all my days there for 4 or 5 years.

How did you come by training?

It was by accident. In the 1980s, I was up in the Colorado mountains doing a lot of ranch work on cattle ranches, dude ranches. I was working with hundreds of horses, including problem horses that had a large variety of [problem behaviors such as bucking, not stopping, etc.]. I also worked with a lot of people, trying to teach them how to have a good ride. But I wasn’t very good at it, because I hadn’t learned to communicate. But I realized that working with people was a lot like working with horses: they need to understand what they are expected to do before they can have a good ride.

Later, I was a horse abuse investigator for the state of Colorado, and that gave me some experience communicating with people [who were having trouble caring for their horses]. Then, someone called me to come work with a problem horse. Next, their neighbor called. It just kind of grew from there. Soon, I was working with whole groups of people and horses. Now I hold clinics around the world.

Basically, I try to help folks get along better with their horses by finding some common ground so they can accomplish what they want to accomplish. I have two main messages — Don’t fight; and be clear. If you can do those two things, it opens the door for pretty much everything else.

The vast majority of horse training is designed to find the bad stuff horses are doing, so we can fix it. I try to find the good behavior, so we can build on it. That doesn’t mean we ignore the bad, but we don’t hit it head on. You try to work around it.

Can you give an example?

Well, a lot of people will come to the clinics and say, “My horse doesn’t stop when I want it to.” So, I’ll ask the rider what constitutes a good stop? How many steps do they want the horse to take before it stops? Well, often they don’t know — they haven’t thought about it. They get an idea in their head as to what they want to do, but don’t give a lot of thought as to how they are going to get there.

So the first step is to break things down. Before the horse can know what it is supposed to do, the rider needs to know exactly what he or she wants. Then, you can start making some progress, such as working on how much pressure [the rider can put on the reins] to make the horse stop.

What do you mean by “don’t fight?”

Horses are usually happy to do whatever we want them to do — if they know what we want. But if you come in with the attitude that the horse is [intentionally disobeying], you set yourself up for a confrontational situation, and it all goes downhill from there. But if you say, “I’m not going to fight with you,” you open lots of doors.

Then, people often realize the problem is that they are applying cues that the horse doesn’t understand. It’s a basic misunderstanding from the get-go. It would be like going to Germany and speaking English to everyone and assuming they would understand. It isn’t going to work.

So you help people think about why they are having problems with their horses?

Yes. I really urge everyone to look at all kinds of possible explanations [for problem behavior]. Sometimes, it’s not really a training issue. You have to make sure the saddle fits properly, that the horse doesn’t have some kind of a chiropractic issue. Horses can be stiff or sore. We see a lot of teeth and feet problems. Basic horse care can solve a lot of problems.

What techniques do you use to get your ideas across?

One thing I do at the beginning of some clinics is that I split the people up into “horses” and “riders.” Then, the “riders” have to go back and teach their “horse” a task — such as walkng in a figure eight, then jumping a fence, and then sitting in a chair. But they can only use the words “good” and “no.” Yesterday, we did it with 10 people, and only one of the “horses” understood exactly what it was that their “rider” taught them. The vast majority of the time people can’t get it done. So they realize how important communication is.

Then, I have my students pick a task for me to teach a “horse.” And they come up with some weird things. Once, I had to [teach the “horse”] to write my name backwards in the sand with his foot. But I did it. You just have to keep up a steady stream of “goods” and “nos,” and not just communicate once every so often. You have to be clear about what you want.