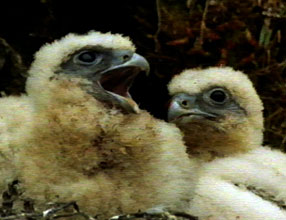 The people who settled Iceland had to be hardy and courageous. And they had to be creative, if only to find ways to pass the time during the long, dark Icelandic winter, when the sun disappears from the sky for much of the day. Indeed, it may have been the challenge of keeping cooped-up families entertained that produced Iceland’s rich and varied literature. From heroic myths to ponderous sagas, Iceland’s artists have produced a wealth of work that continues to entertain the world to this day.

Many of these wonderful stories highlight how Icelanders perceived their natural neighbors. Iceland: Fire and Ice, for instance, profiles three birds — the whooping swan, the ptarmigan, and the gyrfalcon — that figure prominently in Icelandic myth. The elegant swans that come to Iceland’s lakes and hot springs each year, island residents believed, were god-like Valkyries: beautiful maidens who chose which heroes were to die in battle. Some believed the hot springs carried restorative powers that the Valkyries could find nowhere else on earth — and, in a sense, they were right. Iceland’s thermal pools do provide a rich array of food to ducks and other swimming birds, making them favored feeding grounds. Indeed, Iceland’s Lake Myvatn supports more than a dozen species of ducks in summer, more than are found anywhere else in Europe. The birds are partly attracted by the hordes of insects that breed in the lake — which explains its name, translated as “lake of the flying midges.”

The tale of the ptarmigan and the gyrfalcon is more dramatic. Once, legend has it, the plump, ground-dwelling ptarmigan and the fleet gyrfalcon hunter were sisters. They lived side by side, playfully tangling at times. One day, the gyrfalcon accidentally killed her sister without knowing it. When she realized what she had done, an anguished cry filled her throat and sprang from her beak, echoing across the land. To this day, the lonely cry of the gyrfalcon can be heard in the hills of Iceland.

Like the swan myth, the story of the gyrfalcon does carry the thread of truth. For the hunter and its prey are inexorably intertwined: some gyrfalcons dine solely on ptarmigan. To protect it from predators, in winter, the ptarmigan’s white plumage helps the bird blend into the snowy ground. In summer, however, only the female’s feathers change to a dull brown that allows it to hide in the snowless hills. The male remains a sparkling white, making it an easy target if it is caught in the open.

Fittingly, Icelanders even have a myth involving the change of the seasons. Each spring, they say, Freyr, the god of sunlight, must battle the enemy forces of winter to retake the skies. Each fall, however, Freyr must retreat again — and Icelanders cozy up in warm living rooms to retell ageless stories.

About
Living with Nature
Additional Web and Print Resources