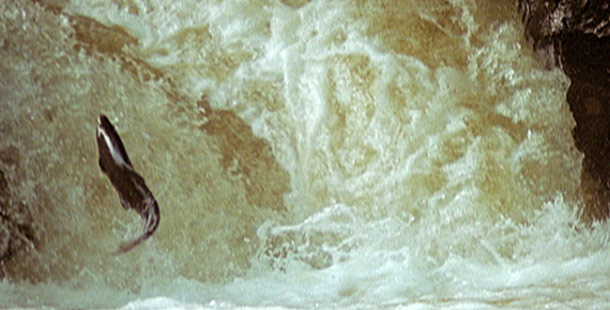 According to Irish legend, Rowan trees once dropped their bright red berries into a sparkling well full of salmon. Fish that gulped the fruit would gain red spots and great wisdom, and men labored to catch and eat these “fish of knowledge.” But women were barred from catching the salmon. One day, however, a brave rebel name Sionan caught and ate one of the wise fish. The next moment, a great flood burst from the well forever carrying her westward to the sea.

So did Ireland’s longest waterway, the River Shannon, earn her name. The story, however, hasn’t ended. As NATURE’s Ireland shows, the historic river continues to play an important role in the human and natural history of the nation. And the great silver fish that once tempted Sionan continue to swim in its gray-green waters.

Rising in the misty moors of County Cavan, the Shannon tumbles and twists 200 miles to the Atlantic Ocean, nearly dividing Ireland in two. Along its banks are dozens of historic towns, castles, and monasteries that testify to Ireland’s storied and turbulent history. The river’s floodplain is dotted with marshy grasslands and bogs that support a wealth of birds and other wildlife. But for many anglers, it is the salmon that draws them to the Shannon.

To biologists, they are known as Salmo salar, “The Leaper.” But for centuries, the great spotted fish’s habits were a mystery. Young fish would appear in the river each spring, only to seemingly disappear. Now, however, we know that Atlantic salmon are “anadromous,” meaning they are born in fresh water but spend some of their lives at sea.

The cycle begins each autumn, when adult salmon — some able to leap waterfalls 10 feet high — swim into the Shannon from the sea to spawn, or lay eggs. The next spring, the newborn “alevin” emerge. Eventually, as the young salmon grow, they acquire vertical bars on their sides, called “parr” markings. Ultimately, the parr transform into silvery “smolt” and head out to sea. After a year or more in the open ocean, during which time they may travel thousands of miles, the adult fish find their way back to their birth rivers to begin the cycle anew. Some adult Atlantic salmon may survive to spawn for multiple years (unlike salmon in the Pacific, which typically die after spawning).

Once, tens of thousands of salmon — some weighing more than 40 pounds — would return to the Shannon to spawn. But development and water pollution have taken a toll. These days, special hatcheries are needed to help sustain the Shannon’s salmon runs, and just a few thousand fish return in some years. Still, salmon remain an important part of the river’s heritage. And if you listen closely, it is said, you can still hear some of the fish whisper Sionan’s name.