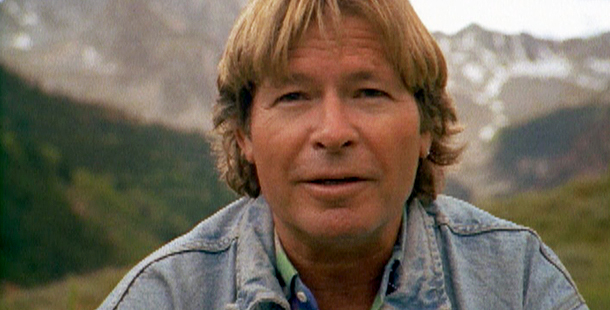 A song, it is said, can lift the heaviest heart and put a sparkle in the saddest eye. And, as John Denver showed during a remarkable life cut short by an untimely accident, a song can also be one of nature’s best friends. NATURE presents an intimate portrait of the life and work of this popular singer-songwriter, who used his music and his prominence to work for the protection of some of Earth’s most extraordinary wildlife and wild places.

John Denver: Let This Be A Voice takes viewers down country roads and up to high rocky mountains. Along the way, it offers a wealth of spectacular side trips, from the roaring rapids of the Colorado River and the serene lakes of back-country Alaska to a golden eagle’s nest high on an Idaho cliff and a herd of wild mustangs on a Wyoming prairie.

The blond, bespectacled folk singer with the pleasing tenor voice first came to public attention in the 1960s as a member of the Chad Mitchell Trio. But while his guitar picking was popular, it was Denver’s songwriting that vaulted him to fame. In 1967, his “Leaving On a Jet Plane” became an international hit for the folk trio Peter, Paul and Mary. Soon, he was singing his own hits, from the country anthem “Take Me Home, Country Roads,” to his ode to Colorado’s high country, “Rocky Mountain High.”

As time passed, however, Denver sought to use his fame to promote protection of the places he knew and loved — and that had served as the inspiration for much of his music. “My greatest inspiration has always been the out-of-doors,” he told fans during a 1995 chat on America Online. “The out-of-doors was my first and truest best friend. It was the desert in Arizona when I was in grade school. Later on, it was the woods around Montgomery, Alabama. Then, it was the plains or the wheat fields when I worked on wheat harvests. It was the forest and the lumber camp that I worked in when I was in college. Nature has always been my best friend. My songs are full of images from nature.”

One of the first major conservation efforts to gain Denver’s support was the 1970s campaign to preserve more than 100 million acres of wild public land in Alaska. Denver was a tireless spokesman for the effort, even making a television documentary that highlighted the dramatic scenery and abundant wildlife of America’s final frontier. In 1980, he joined millions of other Americans in celebrating Congress’s approval of the Alaska National Interest Lands Conservation Act, which set up dozens of new national parks, wildlife refuges, and wilderness areas. And he was one of the dignitaries invited to stand in the Oval Office of the White House while President Jimmy Carter signed the bill into law.

“I experienced one of the most fulfilling days of my life when I stood with President Carter… as [he] signed the Alaska Land Conservation Act into law,” Denver wrote in 1995. “The voice of the American people found harmony with that of the President and the Congress. The chorus that was raised said we will put aside this very special part of our heritage, hopefully forever, but at the very least until a greater need, even a national emergency, requires us to extract [the oil and gas that may be] hidden beneath its surface.”

Denver went on to win a host of awards for his conservation work and found a number of groups dedicated to environmental protection and ending world hunger. But he also found time to be outside, whether fishing for salmon in Alaska or watching the state’s remarkable caribou herds embark on their annual migrations across the tundra.

“To be human is to be nourished by the wild country,” he once wrote. “To know that there is a place where the eagle flies in freedom, the grizzly walks in majesty, and the caribou runs with the wind across the open tundra, lifts the human spirit.” Through his music and public appearances, he also encouraged others to find inspiration in nature and to work, in their own way, to preserve favorite wild places. But he counseled fans not to take on too much. “There are so many things that need to be done that sometimes it seems overwhelming,” he told them. “I try to remind everyone that no one person has to do it all, but if each one of us follows our heart and our own inclinations, we will find the small things that we can do. Together we will come up with enough to create a sustainable future and a healthy environment.”

Tragically, Denver, the son of a pilot and an enthusiastic amateur flyer himself, was killed in an October, 1997 plane crash. He left behind an impressive legacy, from a host of hummable hits to the scores of national parks and wildlife preserves that he helped establish. There are even John Denver scholarships for young scientists studying ecology. Together, these accomplishments will remind future generations of Denver’s commitment to nature.

“I think it’s so important that we always remember that nature, environment, wild places, and wild things are a big part of what makes us who and what we are as human beings,” he once said. “To deny this is to deny our own heritage, our own spirit, and our own souls.”

More From John Denver: Let This Be A Voice (4)
Explore more from this episode More