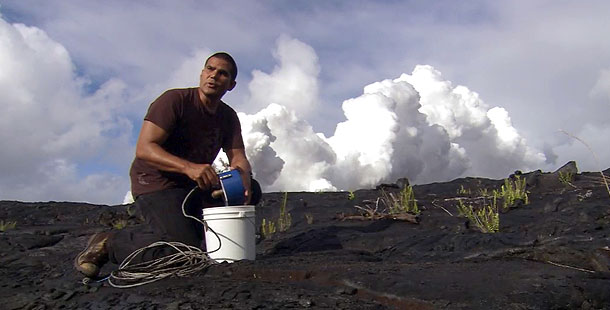 Q: Tell us a bit about ISLA, the Infrasound Laboratory, and its mission.

A: We are located on the western tip of the Big Island of Hawaii. The lab’s main function is to operate listening stations as part of the International Monitoring System of the Comprehensive Nuclear-Test-Ban Treaty. Beyond that we conduct research on volcanoes, ocean waves, storms, and have recently deployed a hydroacoustic station.

Can you give a brief description of what causes infrasonic tremor and where the infrasound is physically emitting from?

Numerous sources at Kilauea could be producing the tremor. As the magma rises to the surface, pressurized gas comes out of the magma. The release of this gas causes pressure fluctuations, or infrasound. Anywhere pressurized gas is being released is a possible source of infrasound. Halemaumau is currently the loudest source of infrasonic tremor at Kilauea. Gas bubbles, both large and small, are involved in producing the sound at Kilauea. They can even excite large underground cavities into resonance, just like blowing over a beverage bottle or ringing a bell.

How long have you been listening to Kilauea?

ISLA’s first deployment was in 2002. Since then we have had continuous recordings using numerous stations since 2006.

Has anyone else done this before—recorded the infrasounds of lava flow?

Volcano infrasound research actually began with the eruption of Krakatoa in 1883. However, the past 20 years has seen the majority of volcano infrasound studies. Numerous volcanoes all over the world have been found to produce a significant amount of infrasound. Kilauea, however, has its own unique voice and we have captured a wide variety of signals from it, from tremor, explosions, lava skylights, fissure eruptions, and bench collapses.

Humans can’t hear the sounds coming from the volcano because they are at such a low frequency, but are there any organisms you know of that can detect Kilauea’s infrasound waves?

I know many animals communicate and hear infrasound (such as elephants), but am not aware of any organisms on Hawaii that would be able to hear infrasound from Kilauea. With that said, the higher frequency audible sounds would be heard by many.

What do you think the future applications of volcanic infrasound research may be?

I think the continued integration of infrasound with other technologies (such as seismic and satellite observations) will greatly help us understand and monitor volcanoes in the future. For example, we have a project in Ecuador right now where we are using infrasound and satellite observations to identify ash-rich volcanic eruptions, in hopes of providing early warning to aircraft operations in the region.

Can infrasound research be used to predict future eruptions?

Rather than focus on prediction, infrasound can tell us what is going on at the volcano right now and whether an eruption is occurring at that moment. Volcanoes are such complex systems that prediction is difficult. Gaining a more complete understanding of what is happening right now and what has happened before probably gives us the best chance for mitigating hazards.

What was your process of setting the microphones and what problems if any did you encounter as you did so?

First we had to select a good location — this is key to obtain good infrasound recordings. The dense jungle forest around Kilauea provides a great location as it shelters us from the wind. Then we needed to find a way to send our data back to our lab in Kona in real-time. From there the installation of the microphones is fairly simple, as we have a set design for our portable deployments. Luckily we have had no major equipment or data problems. Part of this can be attributed to the fact that we are able to record from long distances. Placing microphones next to active volcanoes often increases the likelihood of them being destroyed by the volcano, which is a main reason why we prefer to record from five to ten miles away.

What can infrasound measurements tell us that seismic data cannot?

Seismic data can tell us about magma moving underground, while infrasound is produced when there is pressure released at the surface. This way infrasound can help distinguish between subsurface and surface activity. Lots of seismic activity does not necessarily translate to lava or gas at the surface, but infrasound does. Also we often put out an array of microphones, kind of like an antenna, to determine what direction the sound is coming from.

Does Pele ever stop chanting? Will she ever?

Pele takes short breaks now and again, but she has remained active. Even if she were to take a break at Kilauea, it is likely that she would begin again in the relatively short future. Also, don’t forget Mauna Loa volcano is right next to Kilauea and has erupted numerous times in recent history, and when it does, we will be ready to record its unique voice.

Listen to the recordings (will open in a new browser window):

Go to the ISLA Web site for more information.