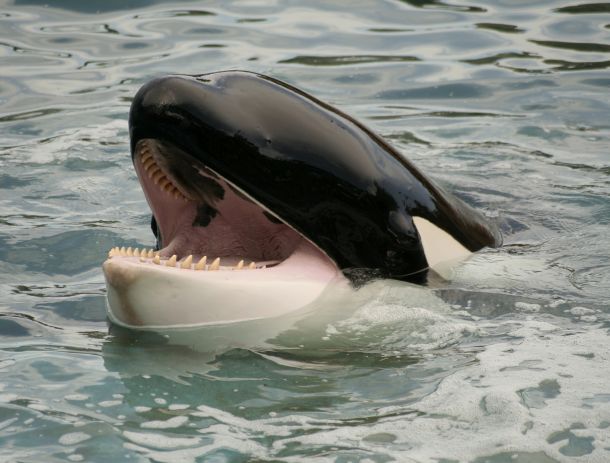 Contrary to the friendly depictions offered up by ocean theme parks, the killer whale (also known as the orca or blackfish), is the most devastating predator to roam the open oceans. It can weigh up to 11 tons, hit top speeds of 30 miles (48 kilometers) per hour and sports a mouth full of three-inch long interlocking teeth. In addition to these more obvious physical adaptations, the orca’s big brain–the second largest among ocean mammals–endows it with an intelligence unparalleled in an animal of its size.

To get a rough measure of animal smarts, scientists look at something called the encephalization quotient (EQ). EQ is the ratio of an animal’s actual brain size compared to the expected brain size for an animal of its mass. Like other members of Delphinidae–the dolphin branch of the cetacean family tree–orcas rank high in EQ. They score about 2.5, which is significantly less than humans at about 7 and bottlenose dolphins at around 4, but higher than baleen whales who all score less than 1. In addition, orcas, like other whales, have a highly convoluted or “folded” brain as well as thick myelinated neurons, which are both equated with processing power.

Orca intelligence isn’t unexpected given that it is a highly social animal that hunts in coordinated packs. Some of the smartest animals in the world–chimps, elephants, dogs, humans–are also highly social. As a result of their intelligence and sociability, killer whale pods have developed novel hunting strategies that are handed down through multiple generations. The techniques vary from region to region depending on available food items, but they are all are a testament to the killer whale’s keen predatory intelligence and ingenuity.

Seals are a favorite food item of orcas living around the Antarctic ice shelf. By perching on ice floes, seals stay just out of reach. However, killer whales have devised a clever way to dump the seals into the water. They charge the ice floe in tight formation, creating a huge wave front. Just before reaching the ice, they dive underneath, giving a last-second push to the wave with their tails. The resulting wall of water crashes over the ice floe and sweeps the seal off.

In a “Who’s the Top Predator?” contest, the orca is the hands-down favorite over sharks. In fact, the great white, the largest predatory shark in the world, has only one natural enemy–the orca. But hunting sharks is a risky business for killer whales. Rows of razor sharp teeth can pierce even the thickest whale hide. Accordingly, the orca has developed an efficient way to dispatch these sharp-toothed snack items. Using its broad tail, the killer whale pushes the shark to the surface on a watery vortex. It then turns slightly and raise its tail high into the air, crashing it down on the shark’s head. The next part is quite amazing: as though it has some knowledge of shark biology, the orca flips the shark over, sending into a stupor that scientists call “tonic immobility”. Now paralyzed, the shark makes for an easy (and safe) meal.

Watch a video of the ‘Karate Chop’ being used by orcas off the coast of New Zealand:

Small fish like herring aren’t even a bite-size snack for killer whales, which makes chasing down individual fish not worth the effort. Orcas off the Norwegian coast don’t let such inconveniences get in the way of a meal. Working together, they use a combination of air bubbles and belly flashes to herd schools of fish into a tight ball near the surface of the water. This churning “bait ball” resembles a rotating carousel, which may have given this method its name: “carousel feeding”. The orcas slap the ball with their tails, stunning the fish, which makes them easier to gulp down by the mouthful.

Watch an animation of carousel feeding from Woods Hole Oceanographic Institute that includes live sound recordings of the orcas communicating with each other:

The NATURE episode Invasion of the Killer Whales shows orcas using a hunting strategy that had never been documented before on film. This could be due to the fact that killer whales have never had such easy access to a large group of narwhals — the prey animal featured. Narwhals are medium-sized toothed whales who gather to breed amidst Arctic pack ice. Historically, killer whales haven’t been able to access their breeding grounds, but vanishing sea ice has changed that. In the film, killer whales chase down an entire pod of narwhal and then, in a formation similar to the ‘Wave Wash’, charge the pod, pinning the narwhal in shallow water. Carnage ensues.

Watch a clip of the incident from Invasion of the Killer Whales:

Orcas don’t limit themselves to eating animals smaller than themselves. They’ve been observed attacking much larger cetaceans such as gray, humpback and even blue whales. Orcas are sometimes called the ‘wolves of the sea’ and like their terrestrial counterpart the gray wolf, they tend to single out young or weak individuals when hunting large prey. The attack follows a familiar pattern: the orcas take turns ramming, biting, and pulling on the whale’s pectoral fins and generally wearing it down. Then they launch from the water onto the whale’s back, trying to prevent its blowhole from breaching the surface of the water. After a chase that can go on for hours, the exhausted giant drowns. The orcas then go to work stripping the whale’s most nutritious bits–its tongue and blubber–leaving the rest of the carcass for scavengers.

Watch orcas attack a female gray whale and her calf. (Warning: this footage may be distressing to some viewers):

Sea lions swimming off the Atlantic coast of South America probably breathe a little easier once they’ve made it back to the beach. After all, they seem to be safely out of reach of orcas lurking in deeper waters nearby.  That false sense of security is quickly dashed when an orca charges the shore and snatches the sea lion, beaching itself in the process. The orca is the only whale known to purposely beach itself. It uses a flapping, hopping motion to shuffle its enormous body back into the water.

Roth et al. (2005) Evolution of the brain and intelligence. TRENDS in Cognitive Sciences Vol.9 No.5. Accessed at: http://www.subjectpool.com/ed_teach/y3project/Roth2005_TICS_brain_size_and_intelligence.pdf