On any other day, the bulky package might have gone through. But on this day, a postal worker in Sri Lanka decided something was not quite right. Soon, his suspicions were confirmed: Inside the paper wrapping was the soft and beautiful fur of a Sri Lankan leopard — an endangered species that is protected by international law. The poachers had struck again.

Around the world, leopards are in trouble. The big spotted cats have been hunted to extinction in some areas, and their habitat — which ranges from dry desert to moist jungle — is under pressure from growing human populations. As NATURE’s Leopards of Yala shows, leopard lovers in Sri Lanka and elsewhere are taking steps to protect these powerful creatures. But while parks and preserves have helped save leopard habitat, the cat’s striking pelt continues to make it an attractive target for poachers. While not as fashionable as they once were, a leopard fur can still fetch thousands of dollars on the black market.

In Sri Lanka, researchers believe poaching has helped reduce leopard populations by up to 75 percent over the last century. While firm numbers are scarce, biologists estimate that less than 500 of the big cats remain in the island nation, which lies off India’s southern coast. Most are thought to be in three national parks, including the Yala preserve featured in Leopards of Yala. 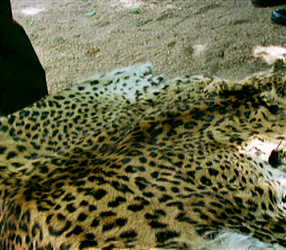 Leopard furs can be worth thousands of dollars on the black market.

To get a better picture of Sri Lanka’s leopard populations, the Sri Lanka Wildlife Conservation Society is currently helping sponsor several studies. Among other findings, researchers have confirmed that the Sri Lankan leopard is a genetically-distinct suspecies (Panthera pardus kotiya) that has its own unique habits. But studying wild leopards isn’t easy, as they are expert at hiding themselves in the forest’s brush and shadows. And they are most active at night, further complicating surveys.

Researchers are also keeping an eye on poaching, which the society calls “one of biggest threats” to Sri Lanka’s leopards. Over the last few years, they have documented at least 25 leopards killed by poachers, but “it is obvious that many more leopards must be killed island-wide that go unrecorded,” society officials note. They’ve also surveyed historical records, turning up dozens of cases — including the 1996 discovery of the postal package holding the finely-prepared leopard skin. As in many other cases, police were never able to find the poacher.

In their hunt for profit, leopard poachers threaten more than just the cats, biologists note. They also threaten to destabilize entire ecosystems by removing a top predator. “The vital role that the Sri Lankan leopard plays [as] the only substantial predator in the ecosystem cannot be overstated,” say wildlife society biologists. “Removing this top cat from the arid zone environment, for example, would have dramatic consequences for a host of species lower on the food chain.” If the leopards don’t keep populations of grazing animals in check, for instance, the grazers could soon denude important forests and grasslands.

Leopard lovers hope to prevent such ecological catastrophes by learning more about leopard habits and answering key questions, such as how much territory the big cats need to survive. And, eventually, they hope that people will see that a leopard’s skin is more valuable on a living animal than it is on a wall.