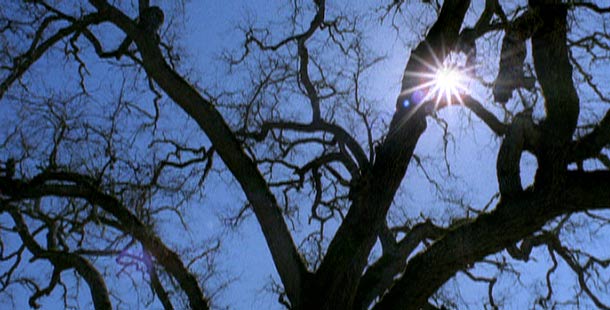 A killer is stalking the Big Sur coast. And if it isn’t stopped, it could forever remake the scenic landscape featured in NATURE’s Living Edens: Big Sur – California’s Wild Coast.

The killer is a mysterious fungus, and its victims are California’s beloved oak trees, the leafy, stout-stalked emblems of the Big Sur coast. Since researchers first discovered the fungus in 1995, they’ve been struggling to understand and control Sudden Oak Death — so far with little success. In the meantime, tens of thousands of oak trees have succumbed to the disease. And scientists worry that other kinds of trees, including the towering coast redwood, could be next.

Thousands of Big Sur’s oak trees have succumbed to a killer fungus. The killer’s path is easily found. In Pfeiffer Big Sur State Park, for instance, rangers have had to cut down hundreds of trees, piling the parched logs into heaps to be burned. Thousands more stand dead on nearby hillsides. Campsites once shaded by oaks are now speckled with stumps and blasted by sunlight. Similar landscapes can be found across hundreds of miles of California.

In a bid to stop its killing spree, disease detectives have been racing to profile the stalker. An early break came when researchers David Rizzo of the University of California, Davis, and Matteo Garbelotto of the University of California, Berkeley identified Sudden Oak Death as a previously unknown strain of fungi from the genus Phytophthora (Phy-TOFF-thoruh), which means plant killer in Latin. They also determined that the killer — called Phytophthora ramorum — comes from a dangerous family: one relative caused the Irish potato famine, and another is known to have killed cedar trees in northern California and southern Oregon, eucalyptus trees in Australia, and oaks in Mexico, Spain, and Portugal.

The killer’s origins, however, are unclear. It might have recently hitchhiked into California aboard a potted plant or nursery-raised tree. Researchers are suspicious because it matches a fungus found on rhododendron shrubs in Europe. But it also could be a native fungus gone bad, turned killer by climate or environmental changes.

For the time being, Sudden Oak Death has spared California’s redwoods. Whatever its past, researchers are more worried about Sudden Oak Death’s future. So far, the disease has hit hardest at several costal species of oaks — including tanoak (Lithocarpus densiflorus), coast live oak (Quercus agrifolia), and California black oak (Quercus kelloggii). The wounds are easy to spot: the fungus enters through the trunk and then causes the formation of bleeding cankers. “We see a whole range of symptoms in the field, from nasty cankers on the trunks of oaks to minor spots on the leaves of the buckeye,” says Rizzo. But the weakest trees don’t last long.

So far, other species have been spared. But, overall, California is home to 16 of the 17 species known to be vulnerable to the disease. And those include two of California’s most highly prized trees — coast redwood and Douglas fir.

At the present time, there is little evidence the towering redwoods and firs are being harmed. But “we cannot say what the effects of the infection will be long-term,” says Garbelotto. “It seems that some species are able to tolerate the pathogen better than others,” adds Rizzo.

More study — and more time — will be needed to solve this ecological mystery. “It may take years before we can start answering questions about the ecological impacts of the disease,” says Rizzo. In the meantime, those admiring Big Sur’s signature oaks can only wait, and hope for the best.

SHARE
Features
About
Photo Essay: Land of Contrasts
Interview: Biologist Paul Henson
Additional Web and Print Resources
You May Also Like
Saving Otter 501
Animal Childhood
Cheetahs in a Hot Spot
The Queen of the Trees
Shark Mountain
The Funkiest Monkeys