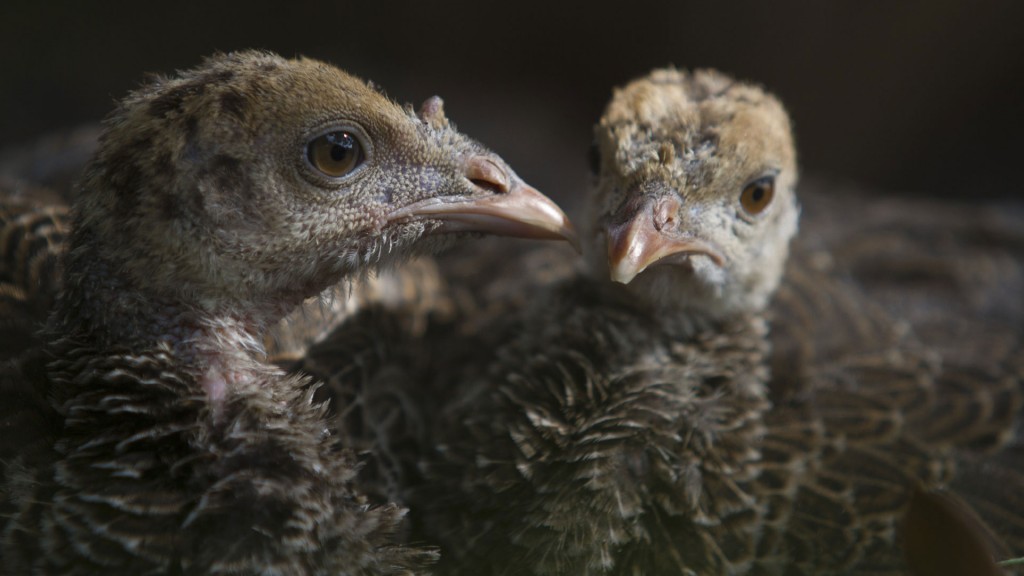 Size and weight: The wild turkey is the heaviest member of the Galliformes order. The male typically weighs between 11 to 24 pounds and is 39-49 inches long. The female, significantly smaller than the male, weighs 5 to 12 pounds and is only 30 to 37 inches long. Despite their size, wild turkeys can run at speeds up to 25 mph and fly up to 55 mph.

Physical Features and Plumage: The male has featherless, red head and throat and a body covered in red, bronze, and gold iridescent feathers. When trying to attract a mate, the male will display, fluffing out the feathers on his body, fanning out his tail feathers and dragging his wings as he struts. The male typically has a “beard,” a patch of course feathers growing from the center of its breast. The female’s plumage is duller, consisting mostly of browns. Each wild turkey has approximately 5000 to 6000 feathers. Other distinctive physical features:

Spurs: Bony spikes on the back of each of the turkey’s lower leg. The male will use his spurs to spar with other males.

Wattle: A flap of skin under the turkey’s chin.

Caruncles: Fleshy bumps that grow on the turkey’s head and throat.

Snood: A fleshy flap that hangs from the beak.

While both the male and female have spurs, wattles, caruncles, and snoods, they are far smaller and less distinctive on the female. 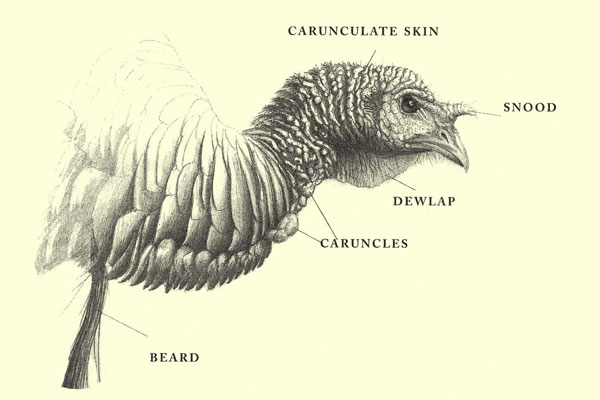 Diet: The wild turkey is an omnivore. It feeds on acorns, nuts, seeds, berries as well as small amphibians and reptiles.

Geography: The wild turkey is native to North America, and is primarily found in eastern and central areas of the United States.

Breeding and Social Structure: The male is polygamous, mating with several female hens during each mating season. To attract a female, the male displays—puffing out his feathers, spreading his tail, and dragging his wings. This behavior is commonly referred to as strutting. After breeding, the female typically lays approximately 12 eggs over a two-week period, though larger clutches of eggs have been observed. Nests are shallow dirt depressions surrounded by vegetation. The female will incubate her eggs for about 28 days.

SHARE
STREAM WITH PASSPORT
My Life as a Turkey
Features
Sketches from the Flatwoods
Clip | Audio Slideshow: Recreating a Life with Turkeys
The Making of a Turkey
Q&A with Naturalist Joe Hutto
Who’s Your Mama? The Science of Imprinting
Clip | A Grasshopper Run
Clip | A New Mother
Full Episode | My Life as a Turkey
Domesticated versus Wild Graphic
Clip | Turkey Fight
Additional Resources
You May Also Like
An Original DUCKumentary
Penguins: Spy in the Huddle | Episode 1 | The Journey