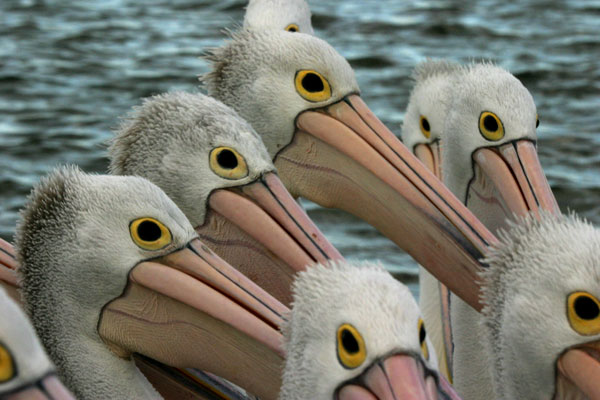 Typically Australian pelicans weigh between 8.8 pounds (4 kilograms) to 15 pounds (6.5 kilograms). Some specimens have weighed up to 18 pounds (8.2 kilograms)

Feathers are white with black wingtips and tails. A grey streak runs down their neck.

The species can be found near the aquatic regions of Australia, including coasts, wetlands, swamps, lakes and rivers. Pelicans will also journey inland during years when the giant saltpan, Lake Eyre, floods due to excessive rains outside the region.

Though most live in Australia, the pelicans can also be found in Papua New Guinea, New Zealand, as well as parts of Indonesia. It is the only pelican located in Australia.

Pelican’s main source of food is fish although they have been known to eat crustaceans, shrimps, small turtles, frogs, and, in rare cases, other birds. A mature Australian pelican consumes an average of 4 pounds (1.8 kilograms) daily.

Australian pelicans breed perennially. When they breed is largely determined by environmental conditions, particularly rainfall. Pelicans prefer to breed in large colonies, some of which are as large as 40,000 individuals. During courtship, to attract potential mates, pelicans will clap their bills open and shut to create a rippling effect on their pouch. Their bills and pouches also change color during mating, showing off blue, pink, black and yellow displays. Males swing their open bills side-to-side both to attract females and to ward off other suitors.

Although a low-risk species, habitat destruction, oil spills, pesticide poisonings are all threats to pelican populations.