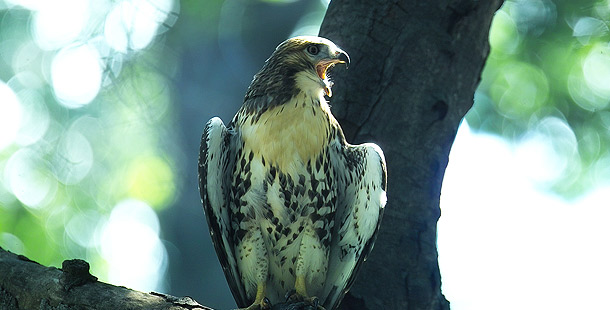 It’s a worrisome moment: A beautiful young red-tailed hawk takes a tumble while learning how to fly and appears injured. But as viewers of NATURE’s Pale Male learn, the young bird of prey gets a clean bill of health from a “raptor rehabilitator” — a specialist in treating injured hawks, eagles, and owls.

Over the last few decades, raptor rehabilitation has become a growing field in the United States and abroad. These wildlife caregivers — some are professional veterinarians, while others are trained volunteers — take in birds that have been hit by cars, injured in accidents or, sadly, shot by irresponsible hunters or poisoned by chemicals. It can be grueling work, requiring long hours treating injuries and hand-feeding birds in preparation for releasing them back into the wild. But some die, and others are too injured to return to nature.

To get a glimpse of a rehabilitator’s life, NATURE recently spoke with Julie Anne Collier, a raptor rehabilitator living in Springfield, Massachusetts. In 1994, she and Jim Parks founded Wingmasters, a raptor rehabilitation group that uses birds unable to return to the wild in educational programs for school children and other audiences.

How did you get involved in this line of work?

Well, I’ve been taking care of birds since 1978. It just grew in a natural kind of way out of my interest in biology and art. I had been drawing birds of prey from pictures, but wasn’t very happy with the results. Then I met a local falconer, who had live raptors, and ended up becoming his apprentice. And in this state, once you get your falconry license you can also get your rehabilitation license. Soon, I was giving programs and working with injured birds. In 1990, I quit [my job in publishing] and began doing programs full time.

How many birds have you treated?

Dozens and dozens. Right now, I’ve got 15 [raptors that I wasn’t able to release] at my house, and 10 others awaiting release. Most of them are red-tailed hawks. They are often hit by cars. Last winter, we had a lot of snow and had a huge number of red-tails that were found starving. Luckily, that’s an easy situation to fix.

But I have a female red-tail that will never be released. It’s a very strange story. Jim was told that somebody was keeping a hawk in a wire cage — that’s against the law; they need roomy, adequate housing. So it was confiscated and it was a mess — its feathers were all broken from throwing itself against the wire. I took the bird in through the winter, until it could grow new feathers. But to my horror, they grew back incorrectly, maybe due to stress, her injuries, or maybe an improper diet. She can’t support her weight in the air. She lives now in a special cage where she can climb around.

What other birds do you have?

The largest is a golden eagle named Lakota. She’s now 27. She was shot in South Dakota, and has been with me so long that she makes a nest on the floor of her flight cage — and expects me to sit in it! And I do. I look like a complete idiot — but I don’t care.

How do you support your work?

People often ask me if the government gives us money. I have a one-word answer: Hah! The programs help us raise funds, pay for our permits, the food. Don’t look in my freezer unless you like frozen rodents! It’s not cheap.

What would you tell someone who wants to do this kind of work?

First, make sure this is something you really want to do. It takes over your life the way kids do. You should do some volunteer work at a nature center to start. Get your hands dirty — clean a cage or prepare the food. These are not pets! Do not do this because the birds are cute or cool. It’s rewarding, but you need to learn the disadvantages, too. I can’t go on vacation, for instance. If you are really serious, then it’s time to become an apprentice to someone like me.

There are a lot of mysteries to rehab work. Just when you think you know what you are doing, you find out you don’t. You always make mistakes. I’m always learning.

But when you successfully return a bird to the wild it must be great.

There is an incredible feeling of release and relief. When you raise baby screech owls — as I did two summers ago — they may not bond to you, but you bond to them. There were three of them; one was found in a road. I spent weeks feeding them microwaved mice every few hours with a hand puppet [so they don’t become “imprinted” on humans]. My gosh, they were just little puff balls! When we released them I was in tears. I went back to the spot later, and heard some screech owls calling. I like to think they were mine, but I couldn’t be sure.

Last year I was called to rescue this young great horned owl in a pasture. I found its nest, but the parents never came back. Luckily, we found another nest elsewhere in the state, so we put him there. By the next day, those parents were feeding it as their own. It’s always so much better when you can return them to the wild quickly … they are much better off.

Sometimes, I’ll invite people to join me for the releases. We’ll release the bird in the name of someone who has died. It seems to help to release a bird as a memorial.

Have you been busy recently?

Well, right after we finish this interview I’m going to go out and get what sounds like a young great horned owl. Some people found it on the ground on the edge of the forest. I’m hoping I can find his nest and don’t have to bring him back here.

Well, thanks for the time and good luck.

If you ever want a microwaved rat, just call me!

More From Pale Male (3)
Explore more from this episode More