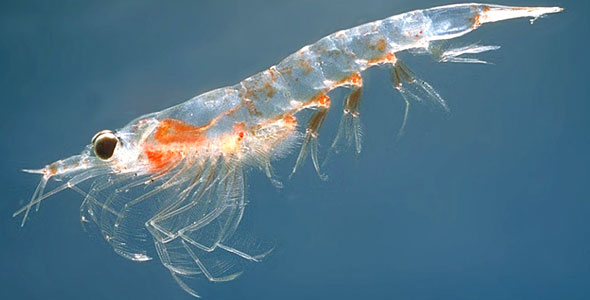 In the Antarctic, krill, which means “whale food” in Norwegian, sustain not only whales, but also penguins, seals, squid, fish, albatross, and other seabirds. These small, shrimp-like creatures represent the very cornerstone of the Antarctic ecosystem — processing the energy of the sun stored in phytoplankton (microscopic free-floating plants) and breeding by the thousands to provide an abundant source of nourishment for higher-order predators. Virtually all the larger animals of the Antarctic are either directly or indirectly dependent on krill.

There are two families of krill: the Bentheuphausiidae family, which consists exclusively of a deep-water species called Bentheuphausia amblyops, and the Euphausiidae family, which consists of 89 known krill species, including — perhaps most commonly — Euphausia superba, or Antarctic krill. Unlike Bentheuphausiidae krill, the Euphausiidae family is bioluminescent. This means that Antarctic krill emit a yellow-green light that is thought to either camouflage the krill’s shadow or aid the krill in mating or schooling at night. Krill are invertebrates that grow to about two inches in length and live in large schools, or swarms, as dense as 10,000 krill per cubic meter of water.

They live in the surface waters of the Southern Ocean, which extends north from the Antarctic continent to the polar front — an area where the cold water of the Antarctic submerges beneath the warmer waters of the Atlantic, Indian, and Pacific Oceans. As this deep, cold water rises to the surface of the Southern Ocean, it brings nutrients from all the world’s oceans into the sunlight, making this area home to what is possibly the earth’s largest assemblage of phytoplankton. It is this massive gathering of phytoplankton that allows for such tremendous swarms of krill, which harvest the miniscule phytoplankton particles with a specially developed feeding basket that filters them out of the water. The krill also find nourishment by scraping ice algae off the underside of pack ice, particularly in spring. These are successful techniques, apparently, since the total biomass, or weight, of Antarctic krill — which is estimated to be between 100 and 800 million tons — may be the largest of any multi-cellular animal on the planet

These small, shrimp-like creatures represent the very cornerstone of the Antarctic ecosystem. This vast resource has long attracted the gaze of the commercial fishing industry, which began krill fishing in the early-1970s. Krill are presently harvested for human consumption, fish feed, and sport fishing bait by vessels from Japan, South Korea, Poland, and the Ukraine, yet the growth of the krill fishing industry has been relatively slow since krill are notoriously difficult to process: their powerful digestive enzymes spoil the catch soon after it is caught, and their shells are cumbersome to remove. Nevertheless, there are concerns about the potential for over fishing in the near future due to the growing demands of aquaculture. Krill are often used as fish feed and salmon farmers in particular find them attractive because they contain astaxanthin, a carotenoid that turns salmon flesh pink. The burgeoning biotechnology industry is also interested in krill since drug companies claim they contain substances that can be used to treat heart disease, premenstrual tension, and skin cancer. Meanwhile, as ocean temperatures rise and the Antarctic sea ice melts, research suggests that krill populations may decrease as the krill are out-competed by salps, barrel-shaped filter feeders that likewise eat phytoplankton and thrive in warmer water temperatures.

In the end, there is still a lot to learn about krill in order to accurately assess their abundance, and best determine how to preserve their population. Scientists, for instance, don’t yet know precisely how long they live or how they survive the long, dark winters. It is suspected that the krill actually shrink, using up the material of their own bodies until the return of the light, and photosynthesizing plants. Until the answers to such questions are found, however, it is difficult to gauge the potential impact of either commercial fishing or global warming on the krill population that is so vital for the sustenance of the entire Antarctic.

Climate Change in the Antarctic
About
Additional Web Resources